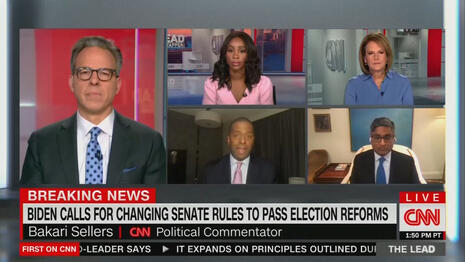 On Tuesday, The Blaze’s Carlos Garcia reported on far-left CNN pundit Bakari Sellers channeling President Biden’s unhinged ranting as he “compared Democrats who are opposed to ending the filibuster to those who were opposed to granting civil rights for African-Americans in the sixties.”

“Sellers made the comments on CNN Tuesday after a report detailing the lack of support among Senate Democrats needed to change U.S. Senate regulations in order to push a voting rights act through Congress,” Garcia explained. Sellers wildly proclaimed: “But if [Sens.] Chris Coons (D-Del.), Jon Tester (D-Mont.), Mark Kelly (D-Ariz.), Kyrsten Sinema (D-Ariz.), and Joe Manchin (D-W.Va.) want to be on the side of George Wallace...if they want to go down in history as standing on the side of segregationists and those who opposed people who look like me having free and fair access to the ballot, then we will remember them as such.”

Read the full article on The Blaze.