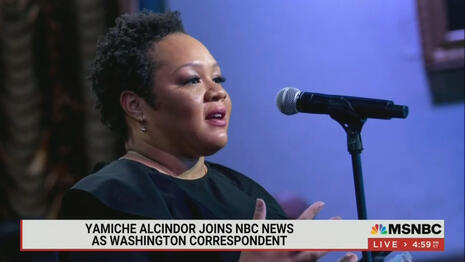 On Tuesday, National Review’s media reporter Isaac Schorr covered PBS White House correspondent Yamiche Alcindor moving to NBC News to perform the same role. He highlighted how “Alcindor has built a reputation as one of the most partisan reporters in the mainstream press, using her seat in the White House briefing room as a soapbox for progressive politics, despite working for the taxpayer-funded, and ostensibly nonpartisan PBS.”

Schorr then list some of Alcindor’s worst displays of left-wing bias over years, including this recent example: “This summer, Alcindor said the debate around the Biden administration-backed For the People Act — which would have federalized America’s elections systems — was really an argument over ‘what is American democracy and who should have access to it?’ and ‘whether or not we want America to be the place that the Founders — flawed as they may have been — the Founders wanted it to be.’”