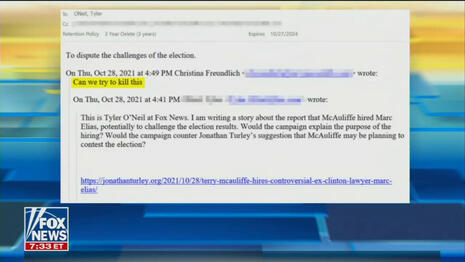 George Washington University law professor Jonathan Turley observed that the hiring of Elias meant “McAuliffe may be gearing up to challenge the results of the upcoming election.” The Townhall article explained: “Fox News’s Tyler O’Neil reached out to the McAuliffe campaign for comment, but the response he received wasn’t meant for him....McAuliffe spokesperson Christina Freundlich replied in what she believed was a message sent to her colleagues, not O'Neil: ‘Can we try to kill this.’”

Read the full article on Townhall.com.