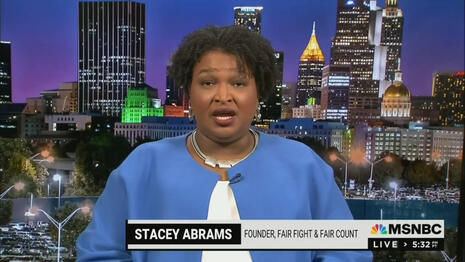 On Monday, Georgia Secretary of State Brad Raffensperger took to National Review to call out MSNBC for defending the “stolen-election lies” of failed Democratic gubernatorial candidate Stacey Abrams following her 2018 election defeat in the state. The article’s subheadline hammered the left-wing cable channel: “Apparently, election trutherism is only a problem when President Trump engages in it.”

After recently pointing out how Abrams pushed the same kind of false election fraud claims as Donald Trump, Raffensperger noted that “MSNBC jumped to Abrams’s defense, arguing that there are some differences between the two, and used demonstrably false election disinformation to do so.” He explained:

In fact, in the whole MSNBC piece, there is only one piece of evidence cited to bolster their claim that President Trump did not follow that Stacey Abrams playbook. The author argues that Governor Kemp “purged thousands of Black people from the voter rolls” before the 2018 election. But the source that the story links to does not even support the author’s claim. The source story references 53,000 voter registrations that were put “on hold,” not removed from the voter rolls.