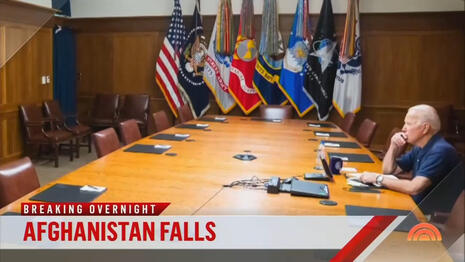 “Americans will now exercise their usual partisan outrage for a few weeks, and then Afghanistan, like everything else in a nation with an attention span not much longer than a fast-food commercial, will be forgotten,” Nichols sneered at the beginning of the bitter screed, titled “Afghanistan Is Your Fault.” He then blamed literally everyone else for the collapse of the war-torn nation, except Joe Biden: “In the meantime, American citizens will separate into their usual camps and identify all of the obvious causes and culprits except for one: themselves.”

This was his reasoning for attacking the general public rather than the politician who was actually responsible for the horrific situation:

This was a war that was immensely popular at the outset and mostly conducted in full view of the American public. The problem was that, once the initial euphoria wore off, the public wasn’t much interested in it....The soldiers who served overseas in those first years of major operations soon felt forgotten. “America’s not at war” was a common refrain among the troops. “We’re at war. America’s at the mall”....What the public does care about, however, is using Afghanistan as raw material for cheap patriotism and partisan attacks (some right and some wrong, but few of them in good faith) on every president since 2001.

Biden’s policy, of course, is not that different from Trump’s, despite all the partisan howling about it from Republicans. As my colleague David Frum has put it: “For good or ill, the Biden policy on Afghanistan is the same as the Trump policy, only with less lying.”

He scolded readers to point any finger of blame at themselves: “...we must look inward and admit that we told our elected leaders—of both parties—that they were facing a no-win political test. If they chose to leave, they would be cowards who abandoned Afghanistan. If they chose to stay, they were warmongers intent on pursuing ‘forever war.’”

“A serious people—the kind of people we once were—would have made serious choices, long before this current debacle was upon them,” Nichols ranted. No mention of why Biden refused to make “serious choices” to avoid the “debacle.” Eager to insert some pandemic politics, he lamented: “Instead, we’re bickering about masks. We’re holding super-spreader events. We’re complaining and finger-pointing about who ruined our fall plans.”

In conclusion, Nichols endorsed Biden’s horrendous push for reckless surrender in Afghanistan and continued to bash the American people:

Biden was right, in the end, to bite the bullet and refuse to pass this conflict on to yet another president. His execution of this resolve, however, looks to be a tragic and shameful mess and will likely be a case study in policy schools for years to come. But there was no version of “Stop the forever war” that didn’t end with the fall of Kabul. We believed otherwise, as a nation, because we wanted to believe it. And because we had shopping to do and television to watch and arguments to be had on social media.

But before we move on, before we head back to the mall, before we resume posting memes, and before we return to bickering with each other about whether we should have to mask up at Starbucks, let us remember that this day came about for one reason, and one reason only.

Because it is what we wanted.

While most of the media have had the decency to admit Biden has utterly failed, hacks like Nichols will spew White House propaganda to the end.