During what was supposed to be a story about the anti-Semitism scandal swirling around Democratic Congresswoman Ilhan Omar, on Tuesday, NBC’s Today show managed to work in not one, but two attacks on Republicans. Eager to deflect criticism from Democrats, the segment featured jabs at Texas Senator Ted Cruz and House Minority Leader Kevin McCarthy.

After detailing the widespread backlash against Representative Omar for tweeting the anti-Semitic trope that American politicians had been bought off to support Israel, correspondent Kasie Hunt tried to soften the coverage by gushing: “Omar is one of the first Muslim women elected to Congress....Part of the history-making group of women elected in 2018. High profile enough to be parodied on Saturday Night Live.”

A clip then ran of the SNL skit, in which cast member Sasheer Zamata portrayed Omar as part of a team of heroic crime-fighting Democratic women. Rather than actually lampoon Omar, Zamata used the sketch to smear Senator Cruz as a racist instead: “I’m a proud Muslim woman and proud American. And when Ted Cruz sees me, he crosses the street.”

Moments later, after Hunt noted criticism of Omar from Republican Leader Kevin McCarthy, co-host Savannah Guthrie chimed in: “Kasie, you just mentioned Kevin McCarthy, the Republican leader, he also has come under fire for a tweet of his own, right?” Hunt took the cue to bash the GOP Congressman: “Savannah, that’s right. He had accused Jewish financier George Soros of trying to buy the election back in 2018. But he did quickly delete that tweet after criticism.”

In reality, McCarthy’s tweet simply criticized Soros for his left-wing influence over Democratic politics, in the exact same way that Democrats routinely attack the Koch brothers for donating to Republicans.

On Monday, CNN attempted to distract from the Omar scandal with the same talking point.

Whenever Democrats find themselves in trouble, the media refuse to just let the scandalous behavior stand on its own. Reporters immediately look for ways to accuse Republicans of something similar in order to nullify the story. The pattern of bias has become predictable.

Here is a full transcript of Hunt’s February 12 report on the Today show:

HODA KOTB: Craig is here with another big talker out of the nation’s capital.

CRAIG MELVIN: Indeed. Hoda, Savannah, good morning. Good morning to you as well. A newly Democratic congresswoman is under fire and apologizing for tweets this morning, tweets that many are calling anti-Semitic. NBC's Kasie Hunt has been following this one for us. Kasie good morning.

KASIE HUNT: Craig, good morning to you. Congresswoman Ilhan OMAR, a freshman from Minnesota, is facing backlash from her own party after writing those tweets over the weekend that have been widely criticized as anti-Semitic.

This morning, Democratic Congresswoman Ilhan Omar Forced to apologize after she suggested on Twitter Sunday that money was driving U.S. politicians to support Israel, tweeting, “It’s all about the Benjamins, baby.” The freshman lawmaker from Minnesota telling NBC News she’s surprised by the backlash.

UNIDENTIFIED WOMAN [REPORTER]: Are you worried about losing committee assignments?

HUNT: This after Senate Minority Leader Chuck Schumer, who is Jewish, condemned her remarks. “Rep. Omar’s use of anti-Semitic stereotype was offensive and irresponsible,” he wrote.

Later, Omar wrote that she was “listening and learning, but standing strong,” writing, quote, “My intention is never to offend my constituents or Jewish Americans as a whole. This is why I unequivocally apologize.”

President Trump weighing in late Monday, telling reporters he’s not satisfied with that apology adding, quote, “She should be ashamed of herself.”

REP. STENY HOYER [D - HOUSE MAJORITY LEADER]: The key will be that when we make a mistake like that, conscious or unconscious, that we don’t repeat it.

HUNT: Omar is one of the first Muslim women elected to Congress.

OMAR: We’re going to Washington everyone!

HUNT: Part of the history-making group of women elected in 2018. High profile enough to be parodied on Saturday Night Live.

SASHEER ZAMATA [SNL CAST MEMBER, AS OMAR]: I’m a proud Muslim woman and proud American. And when Ted Cruz sees me, he crosses the street.

HUNT: This isn’t the first time she’s made remarks widely criticized as anti-Semitic. In 2012, tweeting, “Israel had hypnotized the world.” She also supports a movement to boycott Israel, which was criticized last week by Republican Leader Kevin McCarthy. 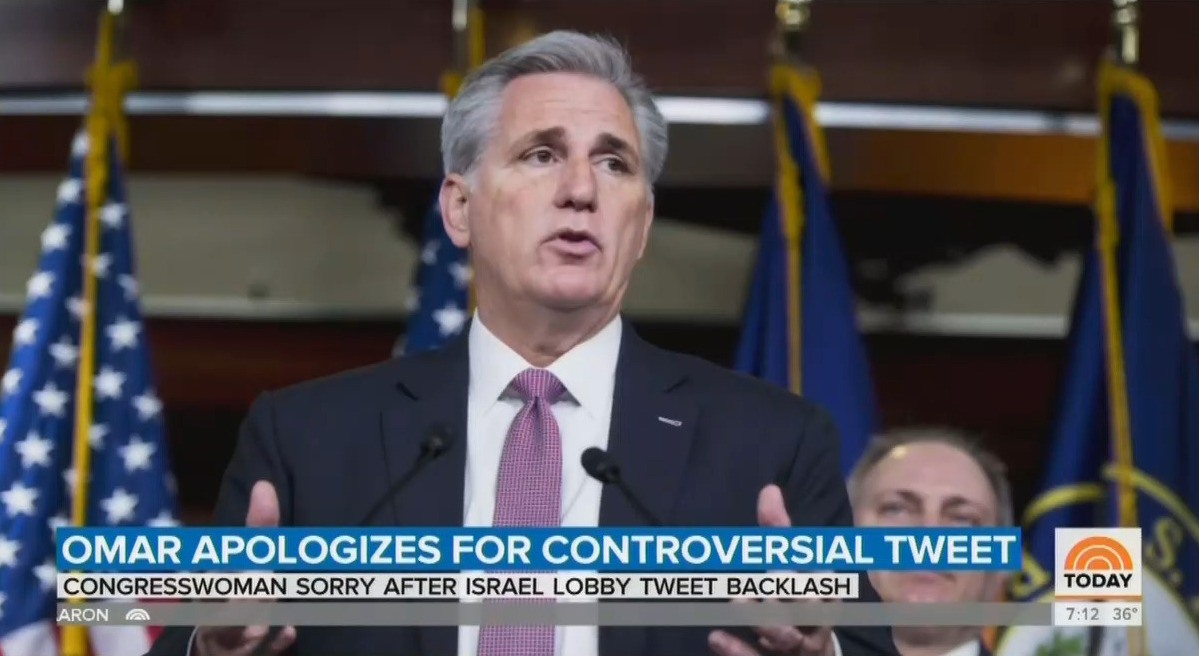 SAVANNAH GUTHRIE: Kasie, you just mentioned Kevin McCarthy, the Republican leader, he also has come under fire for a tweet of his own, right?

HUNT: Savannah, that’s right. He had accused Jewish financier George Soros of trying to buy the election back in 2018. But he did quickly delete that tweet after criticism. And this time, he had promised action if Democratic leaders didn’t act.

Now, as for OMAR and whether or not this is resolved, leaders are telling me that the test is going to be whether she repeats this mistake or whether she has learned from it. Savannah?

GUTHRIE: Kasie Hunt on the Hill for us. Thank you, Kasie.