NBC Asks Ocasio-Cortez: Could Socialism Be ‘Winning Message’ for Dems?

Following NBC’s hostile coverage of President Trump’s State of the Union address and fawning over a “strong” Democratic response from Stacey Abrams Tuesday night, the network decided to get reaction from the far left as it invited on socialist New York Congresswoman Alexandria Ocasio-Cortez for a softball chat about her radical views.

The leftist lawmaker was treated to a gushing introduction from NBC Nightly News anchor Lester Holt: “Alexandria Oasio-Cortez was elected to the House from New York last November, just weeks after her 29th birthday. She’s a progressive Democrat, a favorite target of conservatives, and already so well known she can go by just her initials, AOC.”

...there was a moment, a couple moments in the speech, actually, where the President talked about socialism. He started talking about what’s happening, of course, in Venezuela, but then he said, “Here in the United States, we are alarmed by new calls to adopt socialism in our country.” You, of course, have identified yourself as a Democratic socialist. Do you think he was talking to you?

Guthrie followed up by talking campaign strategy with the Congresswoman: “Do you think socialism would be a winning message or a winning position in 2020 for Democrats?”

Ocasio-Cortez seized the chance to double down on her extreme views, demanding “Medicare-for-all” and a “70% marginal tax rate.” Rather than jump in to challenge any of the radical ideas, Guthrie simply wrapped up the exchange by thanking the New York representative for her time.

In addition to the official Democratic response from Abrams to Trump’s speech, NBC provided viewers with the socialist response as well. The segment might as well have been a speech given the softball, open-ended questions posed by Holt and Guthrie.

Here is a full transcript of the February 5 interview during NBC’s live special coverage of the State of the Union:

LESTER HOLT: Alexandria Oasio-Cortez was elected to the House from New York last November, just weeks after her 29th birthday. She’s a progressive Democrat, a favorite target of conservatives, and already so well known she can go by just her initials, AOC. And she joins us from Capitol Hill. Congresswoman, good evening. Thank you for joining us.

REP. ALEXANDRIA OCASIO-CORTEZ [D-NY]: Good evening, thank you so much for having me.

HOLT: The President laid out a lot there, but in the early part of his speech, he talked about governing not as two parties, but one nation. The sense of embracing compromise. Did you hear things you didn’t expect to hear that might make you think there’s room to work with this president and the rest of this Congress?

OCASIO-CORTEZ: Well, I will say most of the speech was pretty disappointing, but there were moments, I do think that the nod to criminal justice reform is one – one avenue where we can really come together and advance our common – our common cause. I also think that there is a great possibility for us to build and create jobs with mass infrastructure investments. How we make that investment, I think, is obviously up for debate and it’s a major point of debate, but I think those two issues are very strong ones for us to come together on.

HOLT: He also made points about investigations and suggesting that some of the – I think he called them “partisan investigations” – get in the way of growing our economy. How did you react to that?

OCASIO-CORTEZ: Well, I thought it was, frankly, kind of bizarre. I don’t think that investigations into federal misconduct have anything to do with our economy. And, I mean, the fact of the matter is, 3,000 Americans died in a dysfunctional and irresponsible response to Hurricane Maria. We have had children die in DHS custody. We have had the, you know, mass violation of human rights in separating children from their parents. And I think that the desire to not investigate that is a partisan request. In any administration, no matter what party the president is from, if such dysfunction happened, congress would have a requirement to really investigate those things. And without doing so, we’d be abdicating our responsibility. 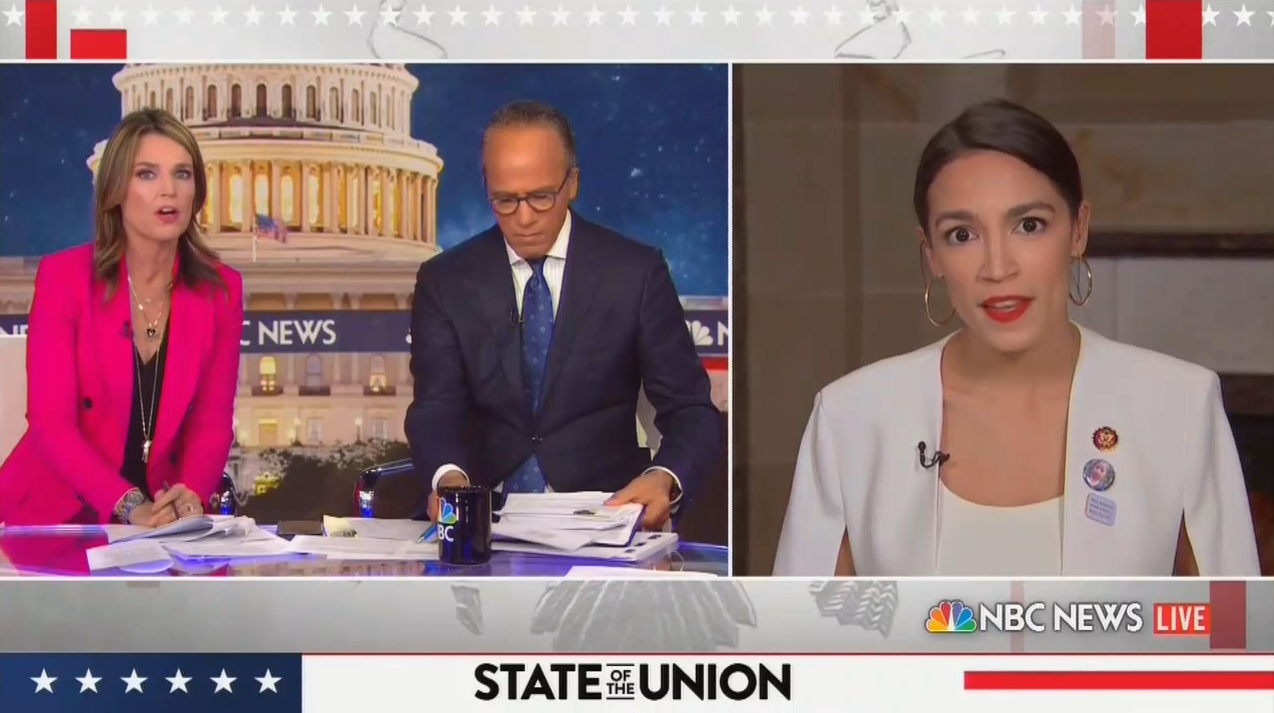 SAVANNAH GUTHRIE: Congresswoman, before I let you go, there was a moment, a couple moments in the speech, actually, where the President talked about socialism. He started talking about what’s happening, of course, in Venezuela, but then he said, “Here in the United States, we are alarmed by new calls to adopt socialism in our country.” You, of course, have identified yourself as a Democratic socialist. Do you think he was talking to you?

OCASIO-CORTEZ: I mean, I think that there’s certainly a major coincidence, if not, you know, if that’s not the least of it, with me and several others coming in, in this Congress, and him choosing to send that message in this State of the Union. But I think ultimately, what we see is that the vast, vast majority of Americans believe that you should be able to feed your family on 40 hours a week and we believe that health care is a right. We believe that work should be dignified and we believe that all people should be accepted regardless of their race, gender, or ethnicity.

GUTHRIE: Do you think socialism would be a winning message or a winning position in 2020 for Democrats?

OCASIO-CORTEZ: Well, I think at the end of the day, it’s not about an “ism” and I think that that’s exactly what the president is trying to do. He’s trying to mischaracterize, frame, associate, because our policies are so popular. Because we advance and fight for improved and expanded Medicare-for-all, which has a 70% approval rating in the American public. It’s because we believe in at least a $15 minimum wage. It’s because we believe in the labor movement. We believe in the unionization of workers. We believe in – we believe in an agenda, including a 70% marginal tax rate, which now even a very large percentage of Republicans have been approving of.

And so, I think what he’s seeing is he’s losing the war on the issues and so he’s gonna to try to go ad hominem, try to call names, he’s gonna try to distract, and we’re not gonna let him do it, we’re gonna stay focused on our message and our cause.

GUTHRIE: Congresswoman Alexandria Ocasio-Cortez, freshman congresswoman from New York. Thank you for your time, we really appreciate it.

OCASIO-CORTEZ: Of course, thank you so much.