Time Editor Hails ‘Year When the System Fought Back’ Against Trump

Appearing on NBC’s Today show Tuesday to exclusively reveal Time’s Person of the Year, the magazine’s editor-in-chief, Edward Felsenthal first discussed the runners up, which included President Trump. After lamenting how the President “showed the weaknesses in our system,” the journalist happily declared that 2018 “was a year when the system fought back.”

On Monday, the NBC morning show touted the finalists for the annual Time cover, a list heavy on picks that liberals would love, including separated migrant families, the anti-gun activists of Parkland, Brett Kavanaugh accuser Dr. Christine Blasey Ford, and Special Counsel Robert Mueller. After co-host Hoda Kotb noted that the Trump was the magazine’s “number two pick,” Felsenthal proclaimed:

Well, you know, there is always a strong case for the President of the United States, and particularly this president, who has upended alliances, changed immigration policy, reshaped the Supreme Court, showed the weaknesses in our system. But it was a year when the system fought back, obviously in the House and other parts of the country in the midterm elections. There was some setbacks in the courts.

Joining MSNBC’s Morning Joe later in the morning, Felsenthal similarly bemoaned how Trump “exposed the weaknesses of our system,” but optimistically argued:

I think what was interesting about this year is that it also exposed the strength, revealed the strength of the system. And we saw a blue wave bigger than most of us predicted in the House, Democratic victories in the state legislatures. Many rebukes in the courts for Trump. And of course the Mueller investigation steams ahead.

Felsenthal also took time on both shows to hail the Russia investigation being conducted by Special Counsel Robert Mueller, who was the third runner up. “I think, you know, we’re at the beginning of the crescendo of this story. Mueller has had a remarkable, methodical year....It may well be the big story of 2019, we’ll see,” he told co-host Savannah Guthrie on Today.

On Morning Joe, co-host Willie Geist predicted: “We’ve gotten drips and drabs out of his investigation. His name may be even more prominent next year, perhaps.” Felsenthal agreed: “About three dozen people and entities charged with almost 200 crimes laid out in page-turning detail, the way the Russian influence operation unfolded. It certainly had enormous impact on the year, but I think this may well be the big story of 2019, we’ll see.”

On Today, the Time editor eventually revealed that journalists, who the magazine dubbed “The Guardians,” where the people of the year.

Here is a full transcript of the December 11 segment on the Today show:

HODA KOTB: We are back, 7:40, ready to answer that question we’ve all been asking, who will be Time’s Person of the Year for 2018?

SAVANNAH GUTHRIE: That’s right. Well, Edward Felsenthal, the magazine’s editor-in-chief, is with us exclusively for the big reveal. Edward, good morning, good to see you.

KOTB: Edward, how are you?

EDWARD FELSENTHAL: Hi, good to be back.

GUTHRIE: Well, we’ve got to stretch it out a little bit.

GUTHRIE: We saw the short list yesterday, and now we can reveal the runners up. Robert Mueller, the Special Counsel, is your number three choice for most influential person of the year.

FELSENTHAL: That’s right. I think, you know, we’re at the beginning of the crescendo of this story. Mueller has had a remarkable, methodical year. He’s charged about three dozen people and entities with almost 200 crimes, laid out in page-turning detail the nature of the Russian influence campaign in 2016. But there’s still a lot of questions yet to be answered. It may well be the big story of 2019, we’ll see. 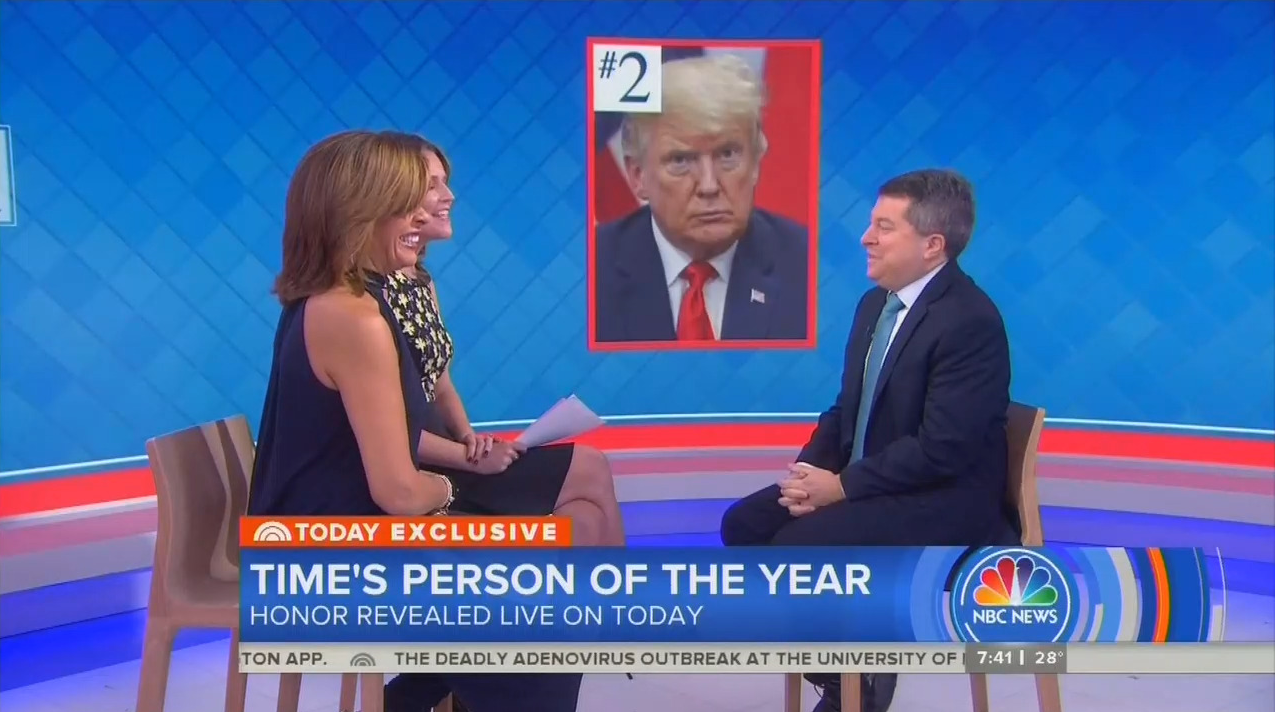 KOTB: The number two pick was someone you picked in 2016 after his election, we’re talking about President Donald Trump. Why is he your number two pick?

FELSENTHAL: Well, you know, there is always a strong case for the President of the United States, and particularly this president, who has upended alliances, changed immigration policy, reshaped the Supreme Court, showed the weaknesses in our system. But it was a year when the system fought back, obviously in the House and other parts of the country in the midterm elections. There was some setbacks in the courts. And, now, there we are.

GUTHRIE: Well, I think this is the time.

KOTB: Is it the moment?

FELSENTHAL: Here we are.

GUTHRIE: So this year it’s not a person, it’s a group of people that you’re calling “The Guardians.”

FELSENTHAL: As we looked at the choices, it became clear that the manipulation and abuse of truth is really the common thread in so many of this year’s major stories, from Russia to Riyadh to Silicon Valley. And so, we chose to highlight four individuals and one group who have taken great risks in pursuit of greater truth, starting with Jamal Khashoggi.

KOTB: Jamal Khashoggi, yeah. Why did you select him?

FELSENTHAL: Well, you know, it’s interesting. This is the first time we’ve ever chosen someone no longer alive as Person of the Year, but it’s also very rare that a person’s influence grows so immensely in death. And his murder has prompted a global reassessment of the Saudi Crown Prince and a really long overdue look at the devastating war in Yemen.

GUTHRIE: There were also other journalists on your covers, tell us about them.

FELSENTHAL: The Capital Gazette in Annapolis, Maryland, five journalists killed in June. A gunman apparently aggrieved by the coverage. And the Gazette, one of the oldest papers in America, did what it’s done since before the Revolution and got a paper out the next day and continues to do so with courage.

KOTB: A couple of others may have people Googling, saying, “I wonder who these two people are?” Tell us about your other two.

FELSENTHAL: Maria Ressa is really an extraordinary individual who has relentlessly pursued the current story in the Philippines. Of course, the rise of autocrats around the world one of the major themes of the year. And she has exposed Duterte’s propaganda machine, the extrajudicial killings, and taken on, as a result, extensive legal – she’s been a legal target in the Philippines, currently under indictment in what many perceive as retribution from her reporting.

GUTHRIE: And a similar story, two amazing Reuters reporters in Myanmar who are currently in prison.

FELSENTHAL: Two amazing reporters, Wa Lone and Kyaw Soe Oo, who exposed a mass killing of ten Rohingya Muslims in Myanmar. And are in prison, actually, one day – a year to the day tomorrow, as a result of their reporting.

GUTHRIE: It’s a fascinating read. And important for these stories to get out to get out there. Thank you so much, Edward.

GUTHRIE: Appreciate it. And you can find Time’s 2018 Person of the Year issue on stands this Friday.