While defending her unsubstantiated accusation that she heard an audio recording of President Trump using the n-word during a taping of The Apprentice years ago, on Monday, former White House staffer Omarosa Manigault-Newman told NBC’s Today show co-host Savannah Guthrie that the media should grill the president about her claims. By Tuesday morning, White House correspondent Kristen Welker had complied with that request. All of it came as the total network coverage of Omarosa's book surged pass the two-hour mark.

“And here’s the thing, why don’t we ask Donald Trump a simple question: ‘Donald J. Trump, have you ever used the n-word?’ And allow him to respond,” Omarosa demanded during the exchange with Guthrie. Moments later, the Unhinged author reiterated: “I would like to see if Sarah Huckabee Sanders, as the spokesperson, will ask the president – or maybe a journalist will ask the president – ‘Have you ever uttered that word about African-Americans?’”

On Monday night, Welker seized that assignment, shouting at the President on south lawn of the White House: “Mr. President, have you ever used the n-word?!” On Tuesday’s Today show, she touted the clip and proclaimed: “Well, this latest spectacle between the President and his former apprentice has all the drama of a contentious reality TV episode. But, it’s a feud that’s also raising serious questions about security, the president’s management style, and his views on race....Overnight, President Trump ignoring tough questions.”

Welker did note that Trump, via Twitter, emphatically denied ever using racial slur:

In a late-night tweet, the president writing the show’s creator, Mark Burnett, “called to say there are NO TAPES of the Apprentice where I use such a terrible and disgusting word as attributed by Wacky and Deranged Omarosa. I don’t have that word in my vocabulary, and never have. She made it up.” 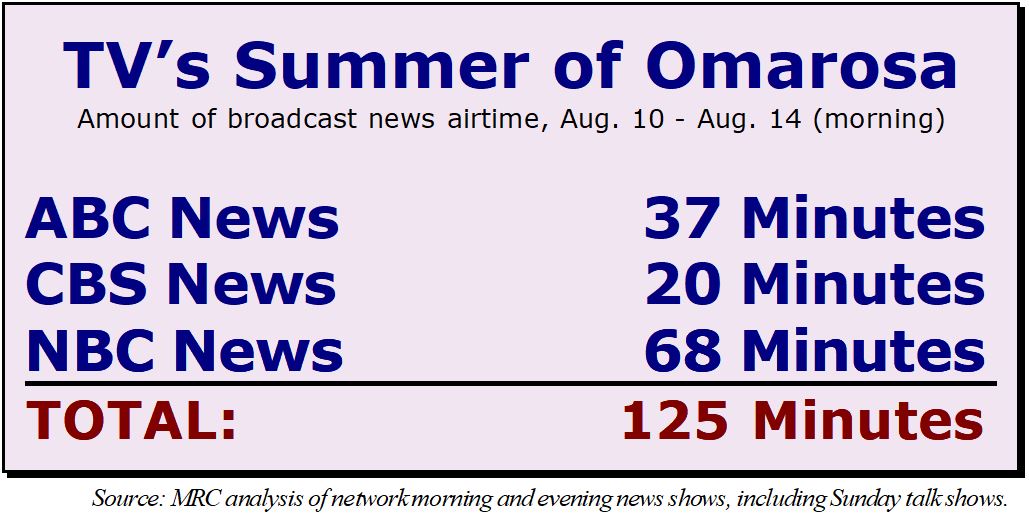 NBC News continued to lead the way, with 67 minutes 50 seconds from the evening of August 10 through the morning of August 14, which included the first two exclusive interviews with Omarosa on Sunday’s Meet the Press and Monday’s Today show. ABC came in second, with 36 minutes 51 seconds. Finally, CBS provided 19 minutes 53 seconds of attention to the book over that time period, which also featured an interview with Omarosa on Tuesday’s CBS This Morning.

While questions continued to be raised about Omarosa’s credibility throughout the ongoing excessive coverage, anchors and reporters used her unfounded allegations as evidence of a White House in turmoil. As Welker demonstrated, so-called “journalists” have even started taking their marching orders from the former Apprentice star.