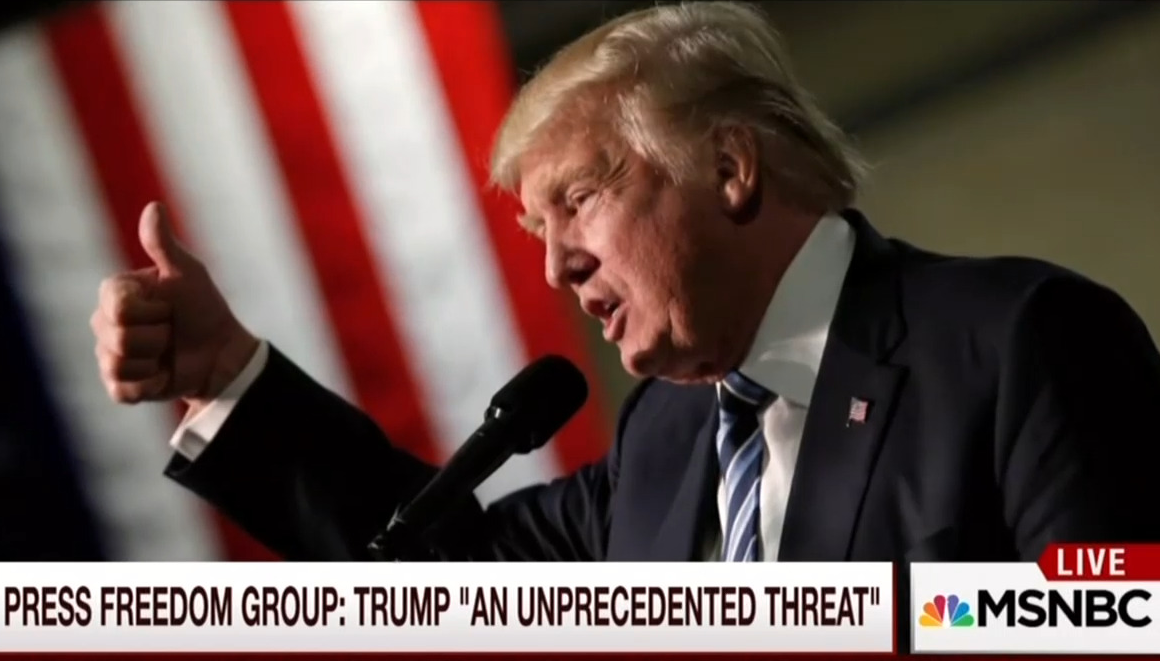 In a bitter attempt to smear President Trump as a dictator, on Monday, the Committee to Protect Journalists (CPJ) placed the American commander-in-chief on a list filled with authoritarian leaders that the organization labeled the world’s worst “press oppressors.”

CPJ began the screed, posted on its website, by explaining: “Amid the public discourse of fake news and President Trump's announcement via Twitter about his planned ‘fake news’ awards ceremony, CPJ is recognizing world leaders who have gone out of their way to attack the press and undermine the norms that support freedom of the media.”

Initially, Trump only achieved “runner-up” status for the “award” for the “Most Thin-Skinned” world leader, losing out to Turkey’s President Erdogan. The article ranted:

In response to media coverage critical of him, Trump has threatened to "open-up" U.S. libel laws, sue news outlets, and subject their broadcast licenses to review. He regularly attacks outlets and individual journalists on Twitter and in speeches, calling them "sad," "failing," or "garbage." Since declaring his presidential candidacy in 2015, Trump has posted about 1,000 tweets critical of the press. CPJ research shows that when public figures and political leaders lob insults at the media, they encourage self-censorship and expose journalists to unnecessary risk.

After the leaders of China, Russia, and Myanmar were given similar dubious distinctions or dishonorable mentions, Trump was named the “winner” of the “Overall Achievement in Undermining Global Press Freedom” award:

The United States, with its First Amendment protection for a free press, has long stood as a beacon for independent media around the world. While previous U.S. presidents have each criticized the press to some degree, they have also made public commitments to uphold its essential role in democracy, at home and abroad. Trump, by contrast, has consistently undermined domestic news outlets and declined to publicly raise freedom of the press with repressive leaders such as Xi, Erdoğan, and Sisi. Authorities in China, Syria, and Russia have adopted Trump's "fake news" epithet, and Erdoğan has applauded at least one of his verbal attacks on journalists. Under Trump's administration, the Department of Justice has failed to commit to guidelines intended to protect journalists' sources, and the State Department has proposed to cut funding for international organizations that help buttress international norms in support of free expression. As Trump and other Western powers fail to pressure the world's most repressive leaders into improving the climate for press freedom, the number of journalists in prison globally is at a record high.

For a group with a mission to defend journalists against serious threats posed by repressive regimes to take cheap shots at an American president they politically disagree with only serves to undermine their credibility as a legitimate watchdog.

That credibility was already tarnished when, weeks before the 2016 election, the CPJ chairman took the unprecedented move of publicly denouncing Trump as a “threat to press freedom.”