While NBC News has so far refused to cover the corruption trial of Democratic New Jersey Senator Bob Menendez, on Thursday, the Today show found plenty of time to laugh at President Trump for taking a sip of water during a White House address on Wednesday. The broadcast devoted two separate segments, totaling 2 minutes 38 seconds, to the President being mocked for his clumsy effort to stay hydrated.

“But it was this awkward moment that lit up social media, the President pausing to take a sip of water,” White House Correspondent Kristen Welker proclaimed. The headline on screen blared: “Trump’s ‘Water’-Gate.” After playing a clip of the incident, she touted: “All of it echoing 2013, when Senator Marco Rubio reached for a bottle during his response to the State of the Union.”

At that time, the morning show featured an entire segment on late-night comedians ridiculing Rubio and reducing his entire speech to that single moment. Then-NBC Nightly News anchor Brian Williams called it “the televised moment from last night that just might live on forever.”

Later on Thursday’s show, social media co-host Carson Daly similarly offered viewers a montage of late-night hosts lambasting Trump. Fellow co-host Hoda Kotb introduced the report late in the 7 a.m. ET hour by gushing: “We are back now with that sip of water that is getting the world’s attention.”

Just in case the audience had missed Welker’s report, Daly cued up the clip of Trump’s water sip once again: “Earlier we showed you that moment during President Trump’s press conference, when he got a little thirsty. If you missed it, here’s another look.” He then highlighted: “Late-night hosts obviously wanted to get in on the action. If you missed that, have a look here.”

CBS This Morning joined NBC in reveling over the humorous instance on Thursday. Co-host Gayle King announced: “On his first day back in Washington, President Trump called his 12-day trip to Asia a ‘great success,’ he says. But his thirst seemed to overshadow his message.” After noting that “The move was quickly compared to Senator Marco Rubio’s water break during his State of the Union response in 2013,” King enthused: “But that’s a funny skit. That’s a skit waiting to happen on Saturday Night Live this weekend.”

The segment on This Morning was 1 minute 30 seconds. Wednesday’s CBS Evening News provided 44 seconds on Trump’s water drinking. Neither broadcast made any mention of jury deliberations in the Menendez trial. In all, CBS News has only spent 22 seconds on the Democrat’s corruption case, in the form of a single news brief on This Morning.

Amazingly, ABC’s Good Morning America, which usually seizes on such frivolous topics, did not cover the presidential water sip on Thursday. Conversely, the ABC morning show was the only network broadcast to offer a full 1 minute 48 second report on the Menendez trial.

NBC’s biased reporting was brought to viewers by Ross, StateFarm, and Google Home.

Here are transcripts of the November 16 coverage of Trump water sip on Today: 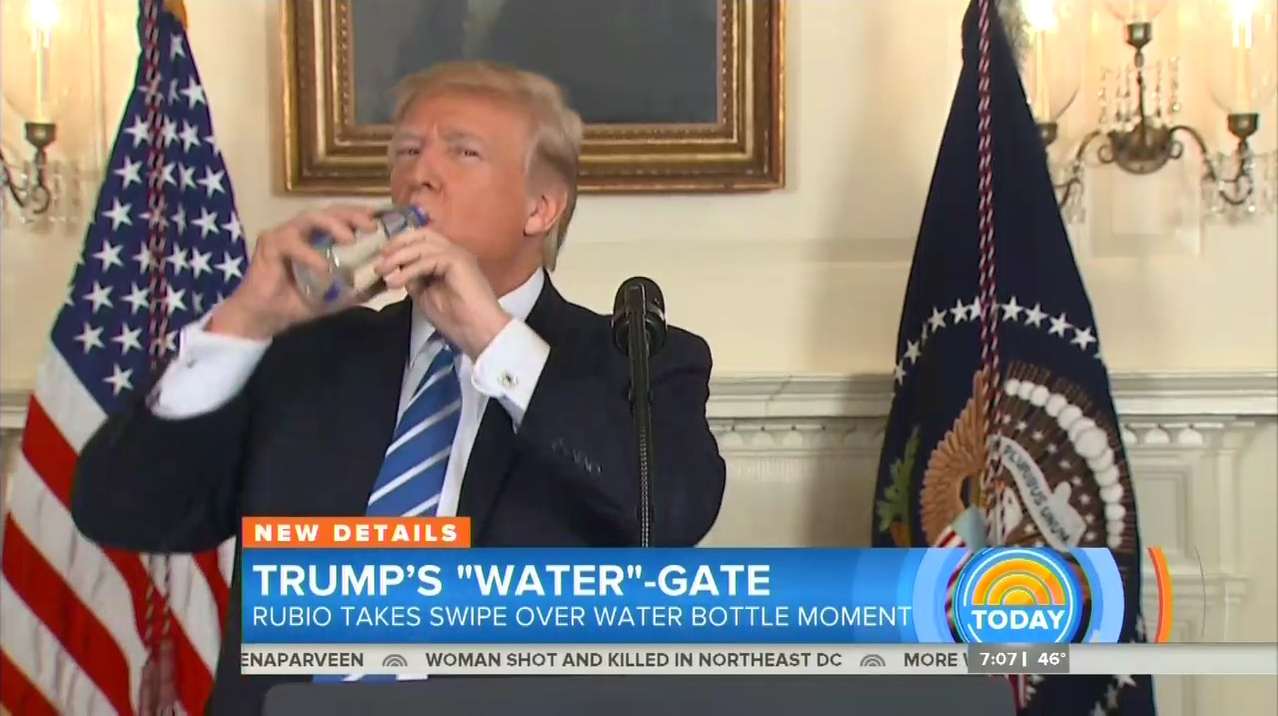 KRISTEN WELKER: But it was this awkward moment that lit up social media, the President pausing to take a sip of water.

DONALD TRUMP: They don’t have water, that’s okay. What? It’s okay [Takes a sip of water].

WELKER: All of it echoing 2013, when Senator Marco Rubio reached for a bottle during his response to the State of the Union. Candidate Trump relished mocking Rubio on the campaign trail.

WELKER: Rubio having a little fun with all of it, tweeting, “Similar, but needs work on his form. Has to be done in one single motion & eyes should never leave the camera. But not bad for his 1st time.”

A little bit of light-hearted fun there.

HODA KOTB: We are back now with that sip of water that is getting the world’s attention. Hey, Carson.

CARSON DALY: Hey, Hoda, good morning, guys. Earlier we showed you that moment during President Trump’s press conference, when he got a little thirsty. If you missed it, here’s another look.

DALY: Of course, on the campaign trail, Trump mocked Marco Rubio for a very similar situation, and now it was his turn. Within minutes, you see the Wikipedia page here for Fiji water. They re-branded it there, they changed it to “the official thirst quencher of Donald Trump.”

Late-night hosts obviously wanted to get in on the action. If you missed that, have a look here.

STEPHEN COLBERT: What’s that? Okay, okay, alright. They got that? Okay, they got this [Opens a water bottle and drinks].

JAMES CORDEN: He drinks like one of the robots on the Pirates of the Caribbean ride.

DALY: And the roasting continued online. The Daily Show posted this photo here on Twitter, saying, “President Trump’s official portrait unveiled.” So far, no tweets from the President himself about the water incident. Guys, it seems like he might want to get in on it. It seems like a perfect opportunity to potentially re-brand Trump Water.

MATT LAUER: There you go.

SAVANNAH GUTHRIE: Oh, there you go.

GUTHRIE: Well, he did have his fun with Marco Rubio back in the day. I guess it all just comes around.