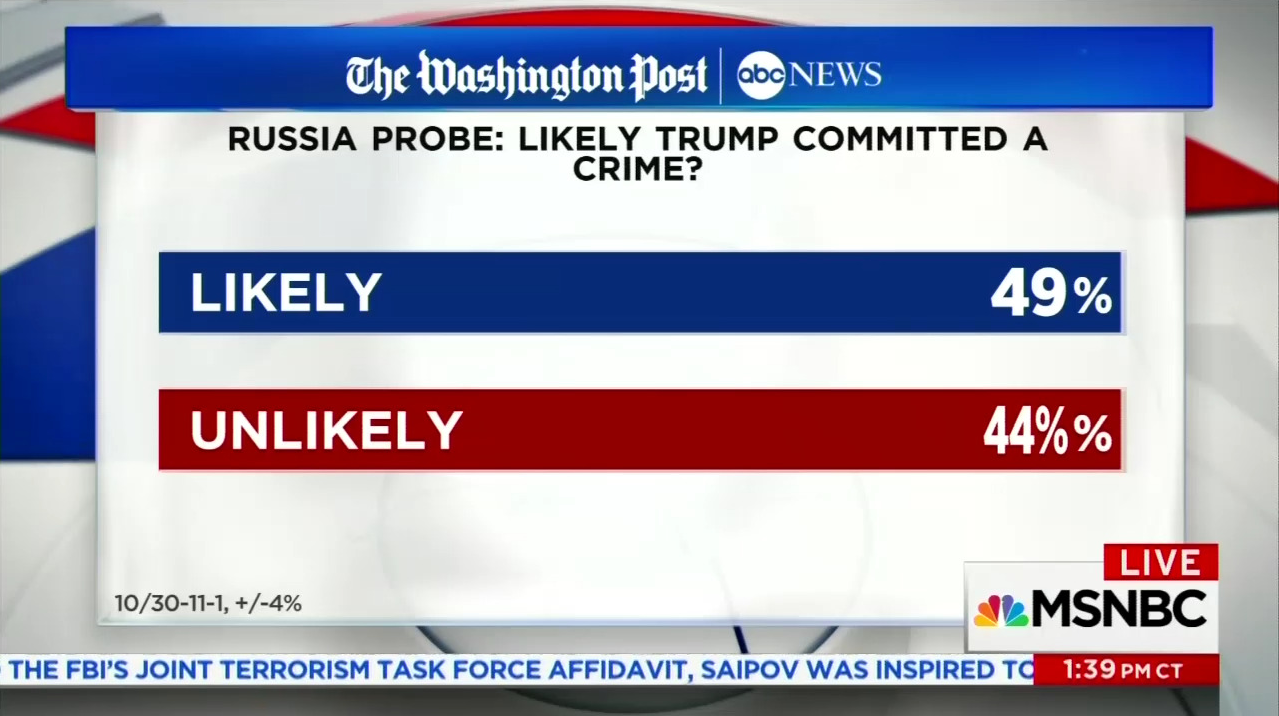 A new Washington Post/ABC News poll released Thursday afternoon asked respondents to convict President Trump of an unknown “crime” in relation to Special Counsel Robert Mueller’s Russia investigation. The leading question found “49 percent think it is likely Trump himself committed a crime in connection with possible Russian attempts to influence the election,” though most admitted that “this view is based on suspicion rather than hard evidence.”

“Do you think it’s likely or unlikely that Trump himself committed a crime in connection with possible Russian attempts to influence the election? (IF LIKELY) Do you think there's been solid evidence of that, or is it your suspicion only?,” the survey asked. Of the 49 percent that thought it was “likely,” only 19 percent thought there was “solid evidence” to back up the charge, while 30 percent confessed that their opinion was founded on “suspicion only.”

Forty-four percent of respondents thought it was “unlikely” that the President “committed [a] crime.” Seven percent had no opinion on the matter.

It’s not that surprising that the Post and ABC would be able to get nearly half of Americans to agree with the premise that Trump was guilty of a crime regarding alleged Russian collusion in the 2016 election. After all, the Big Three network evening newscasts have spent over a thousand minutes of air time promoting that narrative since the day the President was sworn into office – despite a complete lack of evidence.

The pattern is all too familiar. The liberal media spend 10 months insinuating that Trump must be guilty of some criminal conspiracy with Russia to steal the 2016 election, then they ask their viewers and readers to repeat back what they’ve been told every day for nearly a year. Garbage in, garbage out.

The Post write-up of the poll began by triumphantly proclaiming:

More than twice as many Americans approve as disapprove of special counsel Robert S. Mueller III’s investigation of possible coordination between Donald Trump’s 2016 campaign and the Russian government, a new Washington Post-ABC News poll finds, indicating that the conservative effort to discredit the probe has fallen flat as the case has progressed toward its first public charges.

A significant portion of the article was devoted to dispelling the “conservative” narrative about the investigation:

The president and his surrogates have long sought to raise questions about the credibility of Mueller and his team. In the summer, they focused on the people Mueller was hiring, noting that many had donated to Democratic political candidates and Trump’s opponent in the presidential election, Hillary Clinton.

Trump at that time called the probe the “single greatest WITCH HUNT in American political history,” adding that it was “led by some very bad and conflicted people!”

More recently, Trump and his allies, buoyed by conservative media, have tried to point attention toward the Clinton campaign’s role in funding the production of a salacious dossier about Trump — which was prepared by a former British spy who got information from Russian sources. The special counsel has explored some of the allegations in the dossier.

Conservatives have also sought to highlight Clinton’s alleged role in approving the sale of a Canadian company with mining rights in the United States to Russian’s nuclear energy agency.