On Friday, NBC’s Today and CBS This Morning portrayed the partial implementation of President Trump’s temporary travel ban from six Middle Eastern nations as being more controversial that the state of Nevada legalizing recreational marijuana just days after a study showed similar policies in other states caused a spike in deadly traffic accidents.

Introducing a report on the travel ban, Today co-host Matt Lauer worried: “Today marks the start of the busy holiday weekend. It’s also the first full day that a scaled-back version of President Trump’s travel ban is in effect. And already, how it’s being carried out is leading to protests and some confusion.” Justice Correspondent Pete Williams followed: “Well, Matt, it’s been in effect only a matter of hours and the lawyers are back in court. They say the Trump administration has improperly limited who gets to apply for a visa to come here.”

The reporter touted how “Lawyers stood by at the L.A. airport overnight, ready to respond to last-minute hitches in case of a recurrence of the kind of chaos that was sparked by the first executive order before it was shutdown by the courts.” “Advocates for immigrants are now back in court saying those distinctions don’t make sense,” Williams later added.

Compare that hyperventilating to how correspondent Gadi Schwartz talked about Nevada legalizing marijuana in a report just minutes later:

Well, marijuana producers and distributors are in overdrive before tonight for midnight....Beyond the flashing lights of the strip are the new grow lights of what could become Nevada’s latest cash crop....Nevada could quickly become the country’s pot capital. More that 45 million tourists already flock to Las Vegas every year. The state’s 10% marijuana tax is expected to raise an estimated $60 million annually, most of it going towards education.

It’s not really surprising that the liberal media would continue its longtime pattern of promoting pot legalization. However, just one week earlier, the NBC morning show was warning viewers about a new comprehensive study from the Insurance Institute for Highway Safety that legalization of the narcotic in certain states was causing an increase in deadly car accidents in those states.

Schwartz avoided mentioning that finding during his report Friday, only vaguely noting that “Opponents are concerned about a potential increase in drugged driving...”

Reiterating that the policy was “already prompting a legal battle,” Van Cleave teed up a soundbite from one immigrant activist declaring: “It does affect people. It does tear families apart.” Moments later, he explained: “Last night Hawaii asked a district judge to stop enforcing the ban and to more clearly explain what makes a bona fides relationship. Civil liberties groups say they are anticipating further legal challenges.”

In sharp contrast, like Today, CBS This Morning saw no controversy in Nevada legalizing marijuana. Later in the show, King offered this matter-of-fact news brief:

The Las Vegas Review Journal reports on preparations for the start of legal pot sales tomorrow in Nevada. Recreational marijuana will be available at 37 dispensaries in the Las Vegas area. An eighth of an ounce will cost you about $80. An ounce will sell for up to $400. Lawmakers hope to wipe out the black market for the pot.

While no mention was made of any criticism of the move, the CBS morning show, again like NBC, had reported just one week earlier on the same study about deadly drugged driving incidents being on the rise.

Here are transcripts of the June 30 reports on NBC and CBS about the travel ban: 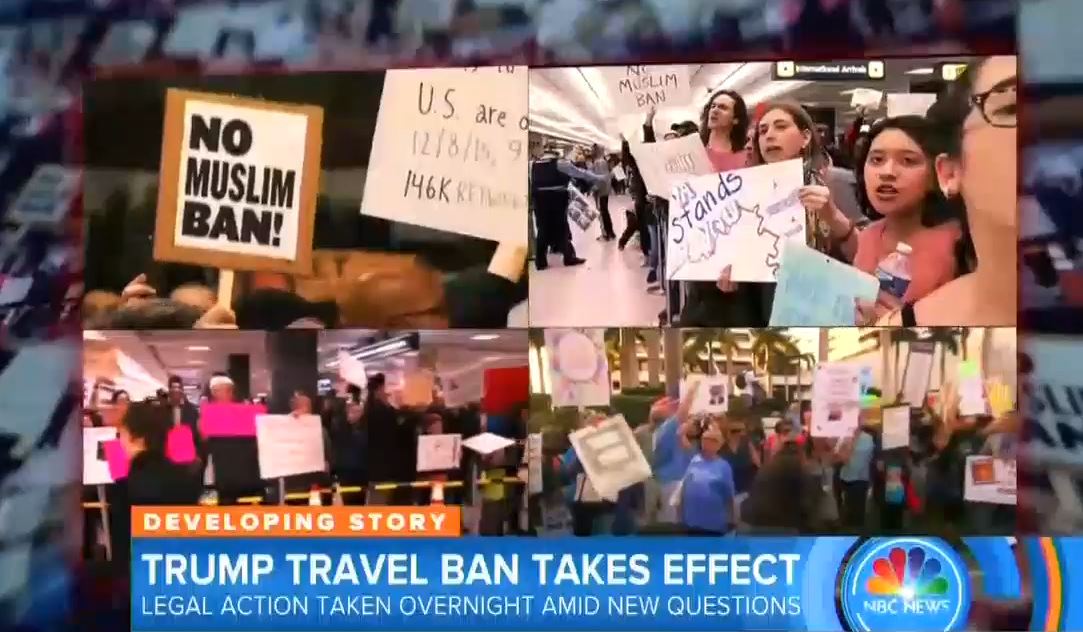 MATT LAUER: Something else we’re focusing on this morning is travel. Today marks the start of the busy holiday weekend. It’s also the first full day that a scaled-back version of President Trump’s travel ban is in effect. And already, how it’s being carried out is leading to protests and some confusion. NBC justice correspondent Pete Williams has more on that. Pete, what can you tell us?

PETE WILLIAMS: Well, Matt, it’s been in effect only a matter of hours and the lawyers are back in court. They say the Trump administration has improperly limited who gets to apply for a visa to come here. And the government has already made one change, fiances now count.

UNIDENTIFIED WOMAN [ATTORNEY]: We are concerned.

WILLIAMS: Lawyers stood by at the L.A. airport overnight, ready to respond to last-minute hitches in case of a recurrence of the kind of chaos that was sparked by the first executive order before it was shutdown by the courts.

And the Trump administration is defining that family connection narrowly. A parent or child, including in-laws, a sibling, spouse or fiancé. But that does not include grandparent, aunt or uncle, niece or nephew, cousin, or brother or sister-in-law.

Advocates for immigrants are now back in court saying those distinctions don’t make sense. Industry groups say the new rules will also dampen business travelers, and not just from the six affected countries.

CRAIG FICHTELBERG [CORPORATE TRAVEL EXECUTIVE]: We don’t know what other countries might get added to the ban. They’re gonna really question whether or not they want to do business in the U.S.

WILLIAMS: The new rules also mean a 120-day ban on admitting new refugees unless they have a connection to family here. That rule would have blocked Mustafa Al Hasoon, who came to U.S. two years ago as a refugee from Syria’s violent civil war. With no family in the U.S., he
says he would have had no place to go.

MUSTAFA AL HASOON: Syrian people who want to come to the United States, who need – those people need, like, a new life, new opportunity. They cannot stay in Syria anymore.

WILLIAMS: The challengers who got the executive order blocked earlier this year are now asking a judge to rule that the government is being far too restrictive about the kind of family relationships that count for getting a visa. A ruling could come next week. Matt, Sheinelle? 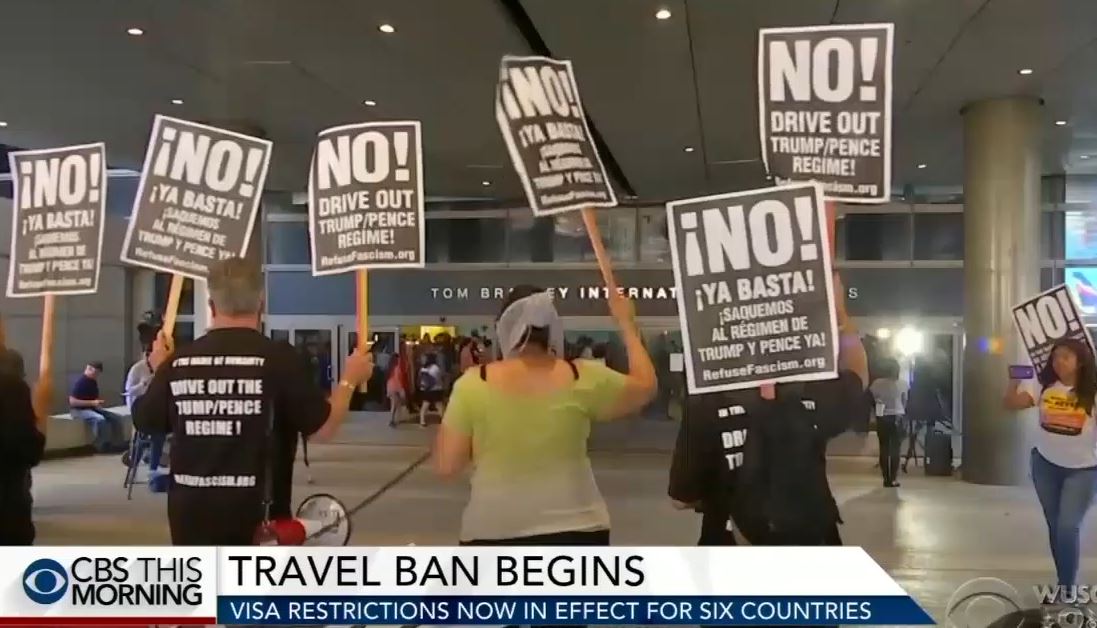 GAYLE KING: The Trump administration’s revised travel ban is in effect this morning, but faces a new legal challenge. Some protesters gathered last night at Los Angeles International Airport and other major U.S. airports as a partial ban took effect. Now it limits entry for people from six mostly-Muslim countries. Travelers from those nations must have a close family member in the U.S. or be coming here for school or a job. Kris Van Cleave is at Dulles International Airport, that’s just outside Washington, with how the definition of “close family member” is facing some criticism now. Kris, good morning.

KRIS VAN CLEAVE: Good morning. Think back to January and the chaos and confusion that was happening here at Dulles and at airports across the country. We’re not seeing that this morning. Now instead, people with a visa are still able to come to the U.S. But now there’s a legal battle brewing over what constitutes bona fides family.

SHEIMA SUMER [IRAQI-AMERICAN]: Most Muslims feel that this isn’t the best way to promote peace.

VAN CLEAVE: The Trump administration’s new visa rules or so-called travel ban did not prompt the protest at the nation’s airports we saw in January, but the executive order’s narrow definition of a family is already prompting a legal battle.

WIDAD HASSAN [YEMENI-AMERICAN]: It does affect people. It does tear families apart.

VAN CLEAVE: Earlier this week, the Supreme Court partially revived the ban but allowed visas to be granted to travelers from the six countries if they have a “close familial relationship” with someone in the U.S. The State Department defined that close relationship as a parent, in-laws, a spouse, a child, or a sibling. And late last night, the government added fiancee. But brothers and sisters-in-law, grandparents, grandchildren, aunts and uncles are not considered by the government to be close.

The State Department is defending that decision.

RAMA ISSA [NEW YORK ARAB AMERICAN ASSOCIATION]: I was raised by my grandparents, so the idea of grandparents not being part of a family is very foreign to me.

MIRRIAM SEDDIQ [DULLES JUSTICE COALITION ATTORNEY]: We feel like we’re going to keep winning, to be honest. And we’re not going to get sick of winning.

VAN CLEAVE: There are other exceptions to the executive order, that includes people with direct business ties to the U.S., journalists, adopted children, and people seeking urgent medical attention here in the U.S. The Supreme Court is set to hear arguments on this new executive order in the fall. David?