Guthrie pressed Conway: “Trump obviously has shown and demonstrated a willingness to go there in terms of Bill Clinton's past infidelities. He even dabbled in it with a tweet this weekend suggesting, ‘Maybe I’ll invite Gennifer Flowers...to the presidential debate’....you’re somebody who appears to have his ear and is able to be persuasive to him. Have you said, ‘You know what, don't go there. It's not your best look’?”

Conway pushed back: “But why did he do that, Savannah? He did it because they invited Mark Cuban, which is fine, that's the right to invite whoever they want. But then they tried to make it some kind of controversial invite....we were just putting the Clinton campaign on notice that if they want to detract from what this debate is meant to be...”

Back in May, the networks rushed to the Clintons’ defense after Trump brought up the scandals. On Today, Matt Lauer lamented the campaign “getting even nastier” and correspondent Peter Alexander declared the race was “hitting another low” as Trump raised the “decades-old allegations of sexual misconduct against Bill Clinton.”

Here is a full transcript of the September 26 interview:

SAVANNAH GUTHRIE: Now let's turn to his counterpart with the Trump campaign. Kellyanne Conway is with us now. Kellyanne, good morning on a long day for everybody involved.

KELLYANNE CONWAY: It's a fun day.

GUTHRIE: You heard what Robby Mook just had to say. They're concerned that Trump will be graded on a curve. People talk about how he benefits from low expectations. Do you agree or do you think he’s being underestimated tonight?

CONWAY: Robby and I are living in parallel universes. I mean, Donald Trump has been criticized all weekend long. I think that the Clinton campaign has clearly been gaming the refs, has been talking to the media for a week now saying, “It's your job to make sure that Donald Trump is fact-checked in real-time.” I'm just surprised a campaign manager would try lower expectations that dramatically for his own candidate. But look, they know that campaign debates are not Hillary Clinton's sweet spot. Yes, she's experienced at doing them, but the experience hasn’t necessarily been beneficial. I've been asking voters formerly, “Can you name anything from a debate that you’ve seen in Hillary Clinton that really moved you or that you remember?” And they can't. And she's been in 34 of them.

MATT LAUER: Robby also talked about their strategy will depend on which Donald Trump shows up tonight. So let me ask you, which one will show up? Is it the aggressor, the guy who has been willing in the past to hurl insults or is it going to be the more reserved Donald Trump, the reigned-in candidate that we've seen on occasion – not that often – but on occasion in the recent past?

CONWAY: Well, Donald Trump is his own person. I mean, he’s been in business quite successfully for many years, Matt. And he will answer the questions as they’re asked. I mean, he has a right to defend himself and he’s a great counter-puncher.

LAUER: But which version of Donald Trump do you think will work best in this debate tonight?

CONWAY: I don't see that there are two versions of Donald Trump. What I see is that he's not going to be robotic and scripted, which we know Hillary Clinton is. And that's a problem in debates like this because people want to see a future commander-in-chief and President of the United States who is nimble and resilient and can answer questions that haven't been pre-programmed in their head through all this secretive debate prep and mock debates. But somebody who can look at the – assess the situation, weigh the consequences and options, and make a firm decision. That's why he’s seen as – that’s why in your own Commander-in-Chief Forum, he got many more questions that Secretary Clinton got because her answers are so lengthy and so lawyerly. His are concise and confident.

LAUER: Well, they have a lot of time tonight. They’ve got plenty of time. 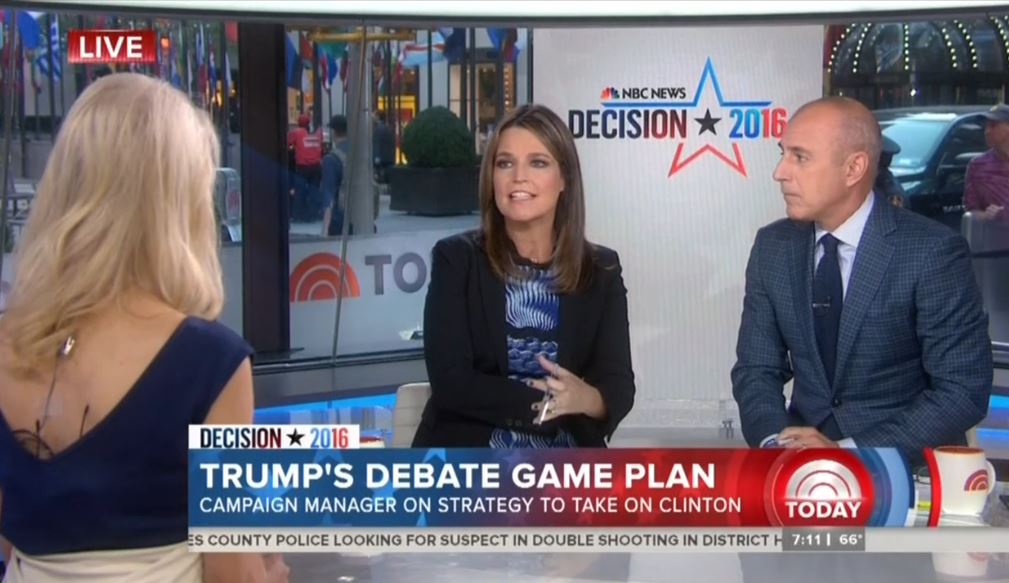 GUTHRIE: Trump obviously has shown and demonstrated a willingness to go there in terms of Bill Clinton's past infidelities. He even dabbled in it with a tweet this weekend suggesting, “Maybe I’ll invite Gennifer Flowers to the camp – to the presidential debate.”

CONWAY: But why did he do that, Savannah? He did it because they invited Mark Cuban, which is fine, that's the right to invite whoever they want. But then they tried to make it some kind of controversial invite, “I’m gonna stand in the front row – ”

GUTHRIE: Even if you do – okay, fine. They invited a billionaire, Mark Cuban, a political rival, perhaps.

GUTHRIE: And he goes straight to Gennifer Flowers. So I guess my question is, you're a pollster, you’re somebody who appears to have his ear and is able to be persuasive to him. Have you said, “You know what, don't go there. It's not your best look”?

CONWAY: I won't discuss private conversations, but I will tell you that we were just putting the Clinton campaign on notice that if they want to detract from what this debate is meant to be, which is a conversation between the two candidates that would be president giving their policy prescriptions to the voters, who expect and deserve. In your own NBC polling, they say the economy, terrorism, healthcare, corruption in government, education, all very important to them.

And I do disagree with my colleague, Robby Mook, whom I respect, but I disagree with him when he says Donald Trump hasn't put forth plans. He's at rallies every single day talking about policies. In just the last month, probably 15 different issues. He’s been out there talking about the issues. She's running these negative ads about him right now where she can take that ad money – a quarter of a billion dollars being spent by her campaign and her super-PACs right now, Savannah – she could take that and say, “Here's my view on ObamaCare, here’s my view on education,.” She's not, she’s trashing him.

LAUER: Real quickly, as he's about to amp up his spending, which we know is about to happen, are you going to tell me now that all those ads that he’s about to pay for are going to be positive policy ads?

CONWAY: They are going to be very positive policy ads, where you see him interacting with folks and he puts forth what his policies are. His new child care tax credit policies, certainly how to defeat radical Islamic –

LAUER: They’re not going to be negative ads?

CONWAY: He will counter-punch if he needs to, but not to her extent she has. I mean, basically they’re her – Hillary Clinton’s entire campaign is an anti-Trump screed. Look at her ads, look at how they’re spending their money. Two weeks ago they promised to be more uplifting, aspirational, and optimistic. We just haven't seen it.

GUTHRIE: Kellyanne Conway, the battle is tonight. Thanks for being here.

CONWAY: Thank you for having me.

GUTHRIE: We’re going to have a lot more on what's ahead in a few moments. And don’t forget, Lester Holt moderating, Chuck Todd and I will be there as well tonight for our coverage on NBC. It starts at 9 Eastern, 6 Pacific. Right here.