Acting like an innocent bystander with no control over NBC’s reporting, on Tuesday, Today co-host Savannah Guthrie declared that the media focus on Donald Trump’s controversies made it impossible for journalists to also cover the scandals swirling around Hillary Clinton: “I mean, this story [of the Khan parents] has now been kept alive for four days...By the way, pushing off some otherwise negative stories about Hillary Clinton that might be leading all the headlines.”

Accepting Guthrie’s claim that the press would all be talking about Clinton’s controversies if not for Trump, Bloomberg Politics editor Mark Halperin proclaimed: “...you’ve got...Hillary Clinton talking about the FBI investigation, where she clearly wasn’t accurate. You’ve got the GDP growth numbers....weak economic numbers for the incumbent party. A lot of Republicans are wondering not just why is Donald Trump continuing to fight with the Khans, but why isn’t he focusing on these issues?”

That same question could be asked of the Today show, which failed to report on those weak economic numbers and only finally noticed Clinton lying about the e-mail investigation in a report only moments earlier – and then, only for 23 seconds:

HALLIE JACKSON: All this, as Clinton faces her own controversy over her e-mails. Fact checkers giving their worst rating to her response to this question on Fox News.

CHRIS WALLACE: The FBI director, James Comey, said none of those things that you told the American public were true.

On Monday, only CBS made any mention of the Democratic nominee’s dishonesty.

Here is a full transcript of Guthrie’s August 2 discussion with Halperin:

SAVANNAH GUTHRIE: Lots to talk about with Mark Halperin. Mark, good morning to you. 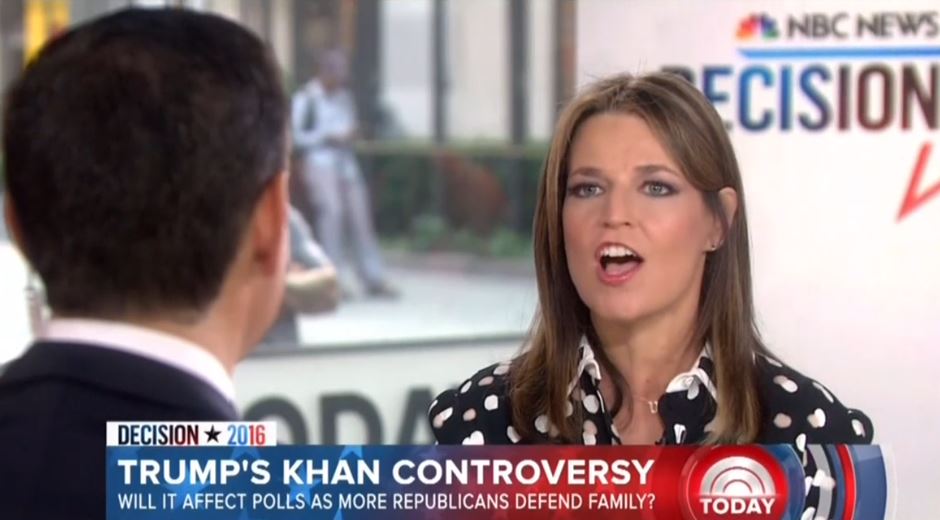 GUTHRIE: Trying to figure this out with Donald Trump. I mean, this story has now been kept alive for four days. Is this strategy on his part or has he kind of just lost control of this? I think about President George W. Bush, who received this kind of criticism from many people, including Cindy Sheehan, but he didn’t engage with Cindy Sheehan. Obviously he disagreed with that criticism, but he didn’t attack her. I don't understand what Trump's strategy is.

HALPERIN: You would be in the same place as a lot of Republicans, including senior Republicans around Donald Trump, at the Republican National Committee, amongst people who would like him to win. There’s really no explanation. No one’s ever behaved quite like this in presidential politics. He’s gone after people before in the past, John McCain, Megyn Kelly, and others, and succeeded basically by showing strength. But he’s chosen here to keep up a long-running battle with about the most sympathetic people you can imagine, Gold Star families.

GUTHRIE: By the way, pushing off some otherwise negative stories about Hillary Clinton that might be leading all the headlines.

HALPERIN: The greatest frustration for Republicans, again, who want him to win, is you’ve got the remarks that Hallie Jackson mentioned about Hillary Clinton talking about the FBI investigation, where she clearly wasn’t accurate. You’ve got the GDP growth numbers. A lot of Republicans say –

GUTHRIE: Which are sluggish.

HALPERIN: Yeah, weak economic numbers for the incumbent party. A lot of Republicans are wondering not just why is Donald Trump continuing to fight with the Khans, but why isn’t he focusing on these issues? At a time when he did not get as good a convention bounce as Hillary Clinton did.

GUTHRIE: Meanwhile, you have these top Republicans like Speaker Ryan, Senator McConnell, John McCain, speaking out, denouncing this attack on the Khans personally and the Khans’ service. You don't see them rescinding their endorsement of Donald Trump. Do you think the pressure is growing on them to do so?

HALPERIN: You also don't see very many of them on camera saying these things. This is an uncomfortable situation for Republicans. You’ve got lots of family members, I’m hearing, of prominent Republicans – sons and daughters and spouses – saying this is not good, this is not the right way, you should consider unendorsing. I think most of them want to wait for the first debate. They still hope Trump wins, they still feel they’re electoral fate is tied to Donald Trump’s. So if they unendorse, they’re worried that the whole party goes down. They want to wait for that first debate, see if he can turn it around. The polls don't look great for him right now, but they’re still close enough, they hope, that he can come back and the party can be unified in the fall.

GUTHRIE: Last thing, quickly, he made that intriguing comment yesterday about the system being rigged. Some people interpreted that as he’s laying the groundwork already that if he loses he can say, “Well, there was something unfair about the process.” Do you interpret it that way?

HALPERIN: There’s certainly that possibility that he wants to have a hedge against the loss, to say, “I couldn’t win because the system was rigged.” It's bad for the country. We need a bipartisan, nonpartisan sense that elections are fair. This is the kind of chaos that Donald Trump sows, maybe for himself, but without thinking about the good of the whole country. Because this election is going to be hotly contested, no matter how close or not close it is.

GUTHRIE: That it is, Mark Halperin, thank you so much. Appreciate it.