At the top of Wednesday’s NBC Today, co-host Savannah Guthrie hyped: “Grand Old Problems. New disarray for the Republican Party. Trump now calling the delegate rules a ‘disgrace.’ The head of the party telling Trump to, quote, ‘Give us all a break.’”

Moments later, Guthrie breathlessly repeated: “Our top story is Donald Trump stepping up his attacks against this election system that he claims is rigged and stacked against him. Well, now, the RNC leader, the party leader, is pushing back. We’ve got complete coverage...”

Correspondent Hallie Jackson noted Trump was planning to give a speech on “party unity,” “Even as he rails against the party.”  Jackson stirred the pot: “...critics say it's Trump who doesn't understand the system, as he calls the party's process a ‘disgrace.’ Adding, RNC chair Reince Priebus ‘should be ashamed.’ Priebus firing back overnight on Twitter. ‘Complaints now? Give us all a break.’”

In a segment that followed, political analyst Nicolle Wallace touted:

And the base of the Republican Party is deeply suspicious that the establishment is going to come in and...ignore the will of the voters, ignore the outcome of all of these primaries. This is the essence of Donald Trump's message right now, that there’s monkey business going on. That somehow your votes won't matter and the party will mess with it.

Guthrie observed: “I would think complaining about a process is not a good look for anyone. On the other hand, he's making this point that probably resonates with a lot of his voters. Like, ‘What is the deal with all the kooky rules?’”

Yeah, and if you look at the backdrop against which this entire campaign has been waged, it is a cycle about grievances. Grievances with a rigged economy, our grievances with an establishment political class that doesn't listen, our grievances with the status quo. So this gets right to the heart of Donald Trump's purpose for running, to shake things up. I don't think complaining about rules that are very difficult to explain, even to though of us who follow this every day, is a bad idea for Donald Trump.

This was not the first time NBC warned of “Grand Old Problems” for Republicans. In October of 2015, fellow co-host Matt Lauer opened the morning show with the exact same phrase while teasing coverage of the presidential race: “Grand Old Problems. Republican candidates reportedly planning to meet about changing how future debates are organized...”

In January, correspondent Peter Alexander was even more melodramatic when he declared the GOP contenders to be stuck in a “mud pit of mayhem.”

On the April 6 Today, Wallace and Meet the Press moderator Chuck Todd joked that it was better for Republicans to “lose with Cruz” than to get “thumped with Trump.”

According to NBC, the GOP is continually mired in chaos and headed for disaster. Meanwhile, the contentious Democratic race was almost completely ignored on Wednesday.

Here is a full transcript of Jackson’s April 13 report: 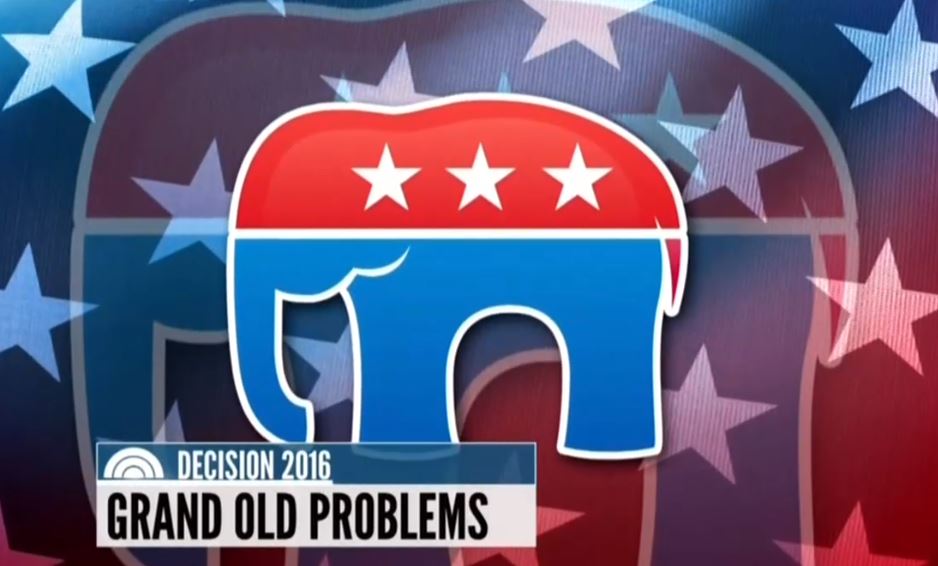 SAVANNAH GUTHRIE: Grand Old Problems. New disarray for the Republican Party. Trump now calling the delegate rules a “disgrace.” The head of the party telling Trump to, quote, “Give us all a break.”

SAVANNAH GUTHRIE: Our top story is Donald Trump stepping up his attacks against this election system that he claims is rigged and stacked against him. Well, now, the RNC leader, the party leader, is pushing back. We’ve got complete coverage, beginning with NBC’s Hallie Jackson. Hallie, good morning to you.

HALLIE JACKSON: Good morning, Savannah. Donald Trump says he plans to put more meat behind his policy proposals, starting with a speech next week on party unity. Even as he rails against the party. All of it as his family comes into focus, stepping into the spotlight to support the Republican frontrunner.

DONALD TRUMP: I'm going to be doing probably ten over the next two months. A lot of them.

ANDERSON COOPER: Do you know when the next one’s going to be will be and what the topic is going to be?

TRUMP: I would say over the next week.

JACKSON: At a forum with his family, the frontrunner hoping to soften his sharp edges. His daughter stealing the show, defending her dad.

INVANKA TRUMP: The type of father he was to a daughter, to daughters, I think evidences how he feels about our gender in general.

JACKSON: Ivanka and her brother Eric explaining why they're not registered to vote for Trump in New York’s primary Tuesday.

IVANKA TRUMP: New York has one of the most onerous rules in terms of registration and it required us to register a long time ago.

ERIC TRUMP: It was our first kind of foray into politics, we didn't realize how the whole system worked.

JACKSON: But his father's critics say it's Trump who doesn't understand the system, as he calls the party's process a “disgrace.” Adding, RNC chair Reince Priebus “should be ashamed.” Priebus firing back overnight on Twitter. “Complaints now? Give us all a break.”

TRUMP: I know the rules very well, but I know that it's stacked against me by the establishment.

JACKSON: A party insider tells NBC News there's been no direct discussion with the candidate's campaign since Colorado. Trump still seems stung by being outmaneuvered there in the delegate hunt by Ted Cruz. Whose wife’s taking her turn on center stage, dismissing Trump’s now notorious retweet of her and Melania Trump side by side.

HEIDI CRUZ: I don't tweet, so I had an ability to completely ignore it. It didn't impact me in the least.

JACKSON: And in the battle for delegates, backup for her husband from former rival Marco Rubio.

MARCO RUBIO: I want the Republican nominee to be a conservative. And in my view, at this moment, of the candidates that are still actively campaigning, the only one that fits the criteria is Ted Cruz. I've said that publicly.

JACKSON: And on the Democratic side, Bernie Sanders this morning is getting some new support of his own. His very first endorsement from a Senate colleague, Jeff Merkley of Oregon  announcing today he will back his Vermont counterpart. Willie, Savannah?