Early in the interview, King demanded: “Are you disappointed in the optics of this?...Some of your other colleagues are saying, ‘Look, we’re not even going to meet with you.’ We hear about the Judge’s credentials, his reputation, his record. Are you concerned that the optics of this look very bad for your party?”

O’Donnell seized on fellow Senate Judiciary Committee member Orrin Hatch saying positive things about Merrick Garland in the past: “...back in 2010 when the President made one of his last picks for the Supreme Court, called Merrick Garland a fine man, a consensus nominee someone who he would help gather Republican votes to vote for him. So what’s changed now? Isn't this just politics?”

Here is a full transcript of the March 17 interview: 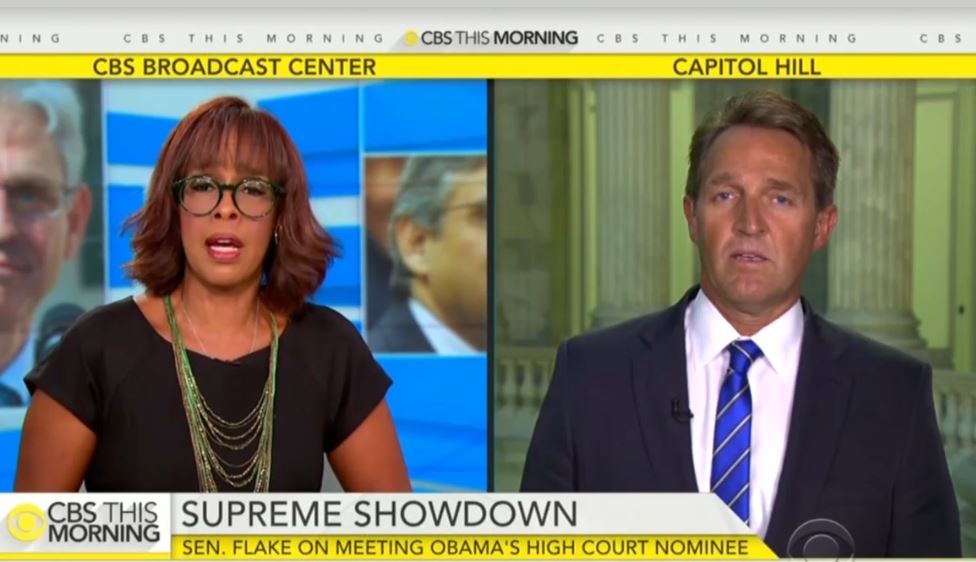 NORAH O’DONNELL: Republican Jeff Flake of Arizona is a member of the Senate Judiciary Committee. He is among a handful of Republicans who have agreed to meet the nominee, Judge Merrick Garland. Senator Flake is with us from Capitol Hill. Senator, good morning.

SEN. JEFF FLAKE [R-AZ]: Thanks for having me on.

O’DONNELL: You have broken with other Republicans and said not only would you meet with the President's nominee, you would consider voting for him in a lame duck session. Why?

FLAKE: Well, I think the goal here for Republicans ought to be to make sure that we continue to have balance on the court and there is a concern that since this is the Scalia seat, that if President Obama or somebody else were to name a justice that was decidedly liberal, it would upset the balance on the court. So I think the Republicans are certainly justified in saying we want to wait until a new president can make this nomination.

CHARLIE ROSE: But what if it's before the election and you do not know who’s going to be the president?

FLAKE: Well, I think that’s just a risk that we take and Republicans have decided to do take that risk. And this is an important seat. And like I said, this is the Scalia seat and it would significantly change the balance of the court were a liberal nominee to be appointed in his place.

GAYLE KING: Are you disappointed in the optics of this? Let's take Mitch McConnell's position, who says, “Listen, we’re not even gonna have a hearing.” Some of your other colleagues are saying, “Look, we’re not even going to meet with you.” We hear about the Judge’s credentials, his reputation, his record. Are you concerned that the optics of this look very bad for your party?

FLAKE: Well, I think, like I said, we have every right. It's been since 1878 since we’ve had a similar scenario where a nominee was made in an election year and would be approved by the opposition party in the Senate. So certainly we are justified in waiting. But there are – these are tough optics, I will admit. But it's a risk that you take and this is an important seat. We want to make sure that we maintain the balance on the court.

ROSE: Speaking of tough optics, The New York Times has a story today that says “the escalating fight over filling the court vacancy holds the potential to be a confrontation that also could help determine the winner of the White House, control of the Senate and the ideological balance on the court. It’s that rare Washington fight that washes over all three branches of government.” Do you agree with that?

FLAKE: Yeah, I do, I do. These are high stakes, no doubt. But the court appointees – lifetime appointees to the court – these are important nominations, it’s important consideration. The Senate has advise and consent, we’re given that role, and I think that’s what we’re doing, is exercising that.

O’DONNELL: Another member of the Senate Judiciary Committee, Orrin Hatch, back in 2010 when the President made one of his last picks for the Supreme Court, called Merrick Garland a fine man, a consensus nominee someone who he would help gather Republican votes to vote for him. So what’s changed now? Isn't this just politics?

FLAKE: Oh, I don't think anything has changed with regard to Merrick Garland. And let me just say that I've talked to others on the court and I hear nothing but good about him.

O’DONNELL: So why wouldn't you give him a hearing?

O’DONNELL: Why not give him a hearing, vote him up or down if he’s a fine man, if he is qualified, why not at least just give him the hearing?

FLAKE: Like I said, I plan to meet with him, but that’s decision I make on my own.

FLAKE: No, I'm going to meet with Merrick Garland and I'll take it from there.

KING: Alright. Senator, your candidate has dropped out of the race, Senator Marco Rubio. Will you endorse someone else?

FLAKE: Well, I'm considering that right now. But I'll probably wait a couple of weeks and see. I'm still hopeful that we can get a nominee that we can be proud of and that can take us through the election.

ROSE: Could you support Donald Trump?

FLAKE: That's a tough one there, let me tell you. I don't want to say anything now, but I would find it very difficult given the statements that he’s made. I believe that we need to win the White House and we’ve got to have somebody who can do it and I'm not certain he can.

KING: Do you want Donald Trump picking the next Supreme Court nominee?

FLAKE: That's another question we’ll have to consider. So you mentioned all these things weigh on the other, a lot of factors that go into this. And, you know, these are high stakes. There's no other way to say it.

O’DONNELL: Senator Flake, good to see you this morning. Thank you so much.

FLAKE: Thanks for having me on.