On Wednesday, NBC’s Today had the audacity to lecture Fox News on journalistic ethics and treating all Republican presidential candidates with “respect.” This was the same network responsible for the disastrous and wildly biased CNBC debate in October that prompted the RNC to dump NBC as a host for an upcoming February debate.

Co-host Savannah Guthrie read a portion of the statement and wondered: “What was the strategy there? Was that smart of Fox, to kind of poke the bear?” Halperin replied by scolding the cable network: “No, it wasn’t. I think journalistically and tactically, it was not a good move. An organization – a news organization sponsoring a debate should treat all of the participants with respect. They should let their journalism speak for itself.”

That certainly wasn’t how the CNBC debate moderators conducted themselves, as Senator Ted Cruz pointed out when he blasted them for their biased and insulting questions:

The questions that have been asked so far at this debate illustrate why the American people don't trust the media.This is not a cage match. And, you look at the questions. “Donald Trump, are you a comic book villain?” “Ben Carson, can you do math?” “John Kasich, will you insult two people over here?” “Marco Rubio, why don't you resign?” Jeb Bush, why have your numbers fallen?” How about talking about the substantive issues people care about.

Here is a full transcript of the January 27 discussion with Halperin:

SAVANNAH GUTHRIE: Let's turn to Mark Halperin, co-host of Bloomberg Television’s With All Due Respect, which also airs on MSNBC. He’s in Des Moines this morning. Mark, good morning to you.

GUTHRIE: It's always been an article of faith in Republican campaigns that you kind of tiptoe around Fox News or you don't antagonize Fox News, because largely that's the Republican electorate. So is Donald Trump smart or is he gonna live to regret this one? 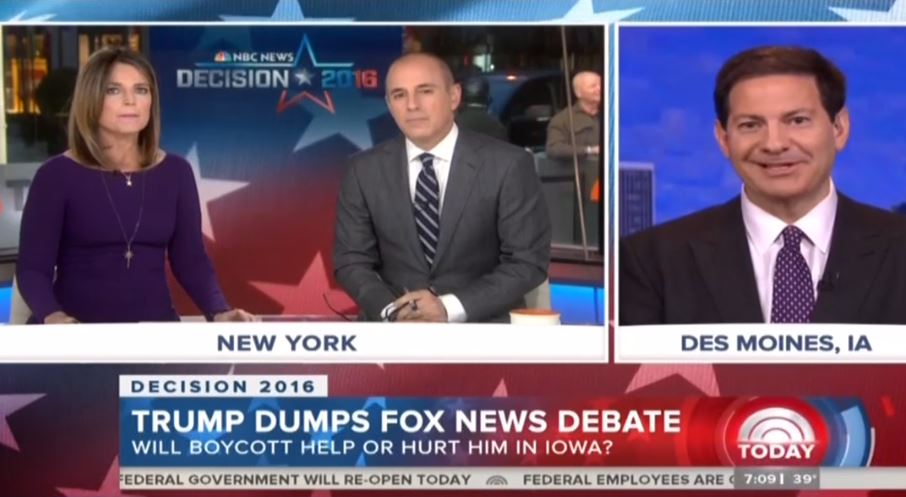 HALPERIN: I think he's on track to dominate the news. Look, we've moved from the silly season here to tension city. There’s just days to go before the voting. Fox News put out a very provocative, confrontational statement. They basically showed Donald Trump one finger, Donald Trump showed them one finger and then punched them in the face. And has thrown the debate into chaos and the closing days here in Iowa into chaos. He is showing strength, though, which is his brand, and he's also got some endorsements and some other tricks up his sleeve in the closing days to do what he's done the entire campaign, dominate.

GUTHRIE: Mark, let's talk about this because you talked about the punch and counter punch. This is what seems to have set Donald Trump off. A Fox News spokeswoman reached out and gave this statement, “We learned from a secret back channel that the Ayatollah and Putin both intend to treat Donald Trump unfairly when they meet with him if he becomes president....A nefarious source tells us that Trump has his own secret plan to replace the cabinet with his Twitter followers to see if he should even go to these meetings.” What was the strategy there? Was that smart of Fox, to kind of poke the bear?

HALPERIN: No, it wasn’t. I think journalistically and tactically, it was not a good move. An organization – a news organization sponsoring a debate should treat all of the participants with respect. They should let their journalism speak for itself. Fox, for some reason, decided to continue to go after Donald Trump. They have a right to have Megyn Kelly be a moderator, that’s their journalistic choice, Trump can decide whether to participate. But by putting out that provocative statement, they gave him not just an excuse, but, I think, a real genuine rationale to say, “I'm not going to show up at a debate sponsored by a news organization that's taunting me.” That’s just not Donald Trump’s way.

MATT LAUER: Sensing an opportunity, Ted Cruz wasted no time, Mark. He jumped in and said, “Look, I'll challenge you, Donald, to a one-on-one debate with no moderator, seemingly taking away the obstacles. How can Trump duck that?

HALPERIN: Well, it's going to be an interesting question, to see whether Cruz keeps that up and whether that debate about debate becomes an issue. Look, Ted Cruz must win Iowa more than Donald Trump. It’s not an absolute essential he finish first, but the stakes are a lot higher for him. Trump leads in the other 49 states effectively. Trump, I don't think, will do a one-on-one debate with Cruz. Cruz is going to have to decide if he wants to keep riding that message. But make no mistake, right now, Trump has a lot of momentum going on here in Iowa. A lot of organization. And Trump’s trying hard to win. Cruz has to find a way to stop him. I'm not sure fighting about debates is the way to stop Donald Trump here.