In the report that followed, correspondent Peter Alexander declared: “...on the topic of Syrian refugees, it is Republicans on the campaign trail who have really gone on the offensive with some of the toughest language yet....more fearmongering and heated rhetoric.”

After highlighting the debate playing out on the 2016 campaign trail, Alexander repeated Guthrie’s fretting over the new refugee legislation:

On Capitol Hill, 47 House Democrats joined Republicans, defying the President's veto threat, passing a bill that would effectively shut the door on refugees coming to the U.S. from Syria and Iraq, setting an almost impossible bar requiring the nation's top three security officials at the FBI, Homeland Security, and National Intelligence personally certify that each refugee is not a threat before they’re allowed in.

He quickly followed up with Democratic attack lines against the GOP: “On its Instagram page, the White House blasted out images of desperate young refugees. Unveiling her aggressive strategy to defeat ISIS, Hillary Clinton attacked the uproar.” A soundbite ran of Clinton declaring: “That is just not who we are.”

On Thursday’s NBC Nightly News, correspondent Andrea Mitchell warned about the GOP getting “ugly” on the issue.

At the top of Today’s 9 a.m. ET hour on Friday, co-host Tamron Hall touted comparisons between legitimate security concerns over Syrian refugees in 2015 to anti-Semitic opposition to Jewish refugees during the Holocaust in 1939:

It’s interesting, a tweet yesterday, The New York Times points out this tweet went viral yesterday. It says, “USA January 20th, 1939. Should U.S. Government permit 10,000 mostly Jewish refugee children to come in from Germany?” It was tweeted out by Historic Opinion, and what they linked you to were a number of articles and the tone and tenor of the debate around the Depression and the Holocaust. And some of the very same language that we are seeing now, they point out, lawmakers were making during that debate. It's an incredible article, you should check it out. But the language from lawmakers to even everyday people wondering how it would impact their lives, exactly the same. There have been people who said, you know, this is not comparing apples to apples, but the article lays out actual quotes from individuals from today and then – it’s fascinating.

HALL: Although, when you hear, like for example, Chris Christie, who’s running for president, say he would not allow in a 3-year-old orphan, people then say, “Well, is that really about safety when you even say a 3-year-old orphan wouldn’t be able to get in the country?”

GEIST: Right. Or is it about politics?

HALL: Is it about politics?

There was no similar concern over Barack Obama or Hillary Clinton using the issue for political purposes.

By contrast to NBC’s coverage, CBS and ABC provided more balanced reporting on the subject.

On CBS This Morning, co-host Gayle King described the House bill in a neutral manner:

This morning a bill challenging the President's plan to resettle 10,000 Syrian refugees is headed to the Senate. The House passed the measure on Thursday. It tightens screening for Syrian and Iraqi refugees. The legislation would require the FBI director, the director of National Intelligence, and the Homeland Security secretary to certify that each applicant poses no threat.

On ABC’s Good Morning America, co-host Stephanopoulos actually framed the bill’s passage as a “big defeat for President Obama.” Correspondent Jon Karl followed: “This was a major rebuke for the President, after days of making the case for his plan to bring in more Syrian refugees. Democrats and Republicans in the House voted to put the program on hold. In the end, it wasn't even close.”

Karl also cited polling data showing the President on the wrong side of public opinion: “But take a look at what voters say is their top issue for the 2016 campaign: more name ISIS than any other issue by far, and terrorism is tied for second....the President has a lot of work here to convince the American people. In a recent poll, only 28 percent favored going forward with the refugee program as he has outlined it.”

That was the first time ABC mentioned a majority of the American people being opposed to the current refugee process, after ignoring it on Thursday.

Here is a full transcript of Alexander’s November 20 report on Today: 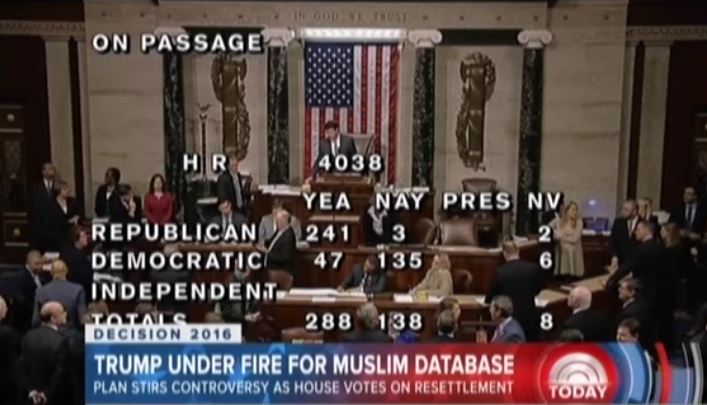 SAVANNAH GUTHRIE: And now to the fierce political debate going on over Syrian refugees entering the United States. Defying the President, the House on Thursday voted overwhelmingly to impose stringent new screening rules. While on the campaign trail, Donald Trump is under fire this morning after calling for the creation of a national database to register all Muslims living here in the U.S. NBC national correspondent Peter Alexander is covering the political piece of this, this morning. Peter, good morning.

PETER ALEXANDER: Hi, Savannah. Americans clearly have real fears after the Paris attacks, it doesn't matter which party you belong to. But on the topic of Syrian refugees, it is Republicans on the campaign trail who have really gone on the offensive with some of the toughest language yet.

In the fight over Syrian refugees, more fearmongering and heated rhetoric.

UNIDENTIFIED MAN [NBC REPORTER]: Mr. Trump, why would Muslim databases not be the same thing as requiring Jews to register in Nazi Germany?

TRUMP: Who are you with?

MAN: I'm with NBC News. Is there a difference between requiring Muslims to register and Jews in Nazi Germany?

ALEXANDER: In Alabama, while calling for tough screening, Ben Carson compared some refugees to mad dogs.

BEN CARSON: If there's a rabid dog running around your neighborhood, you're probably not gonna assume something good about that dog and you're probably going to put your children out of the way.

CARSON: So what does the news media do? “Carson says the Syrians are like rabid dogs.”

UNIDENTIFIED MAN B [MEMBER OF CONGRESS]: The bill is passed.

ALEXANDER: On Capitol Hill, 47 House Democrats joined Republicans, defying the President's veto threat, passing a bill that would effectively shut the door on refugees coming to the U.S. from Syria and Iraq, setting an almost impossible bar requiring the nation's top three security officials at the FBI, Homeland Security, and National Intelligence personally certify that each refugee is not a threat before they’re allowed in.

REP. PAUL RYAN [SPEAKER OF THE HOUSE]: It's a security test, not a religious test.

HILLARY CLINTON: That is just not who we are.

ALEXANDER: And new this morning, the results from the latest NBC News/SurveyMonkey online poll, they were taken after the Paris attacks, here’s what they are. Among Republicans, Trump remains firmly in the lead, he's at 28%. But you can see Ben Carson, he had the biggest drop, falling into a tie for second, now at 18% with Senator Ted Cruz. Cruz grabbing some of Carson’s evangelical support. Marco Rubio at 11%, Jeb Bush you see well behind. On the Democratic side, it’s Hillary Clinton still holding the lead, just shy of 50%. But note this, Bernie Sanders posted his highest level of support in our polls yet at 33%. Savannah, Willie?

WILLIE GEIST: And that Syrian number could grow next year as President Obama remains committed to his plan to accept at least 10,000 more Syrian refugees.