In an interview with Mitt Romney following the State of the Union Tuesday night, NBC Nightly News anchor Brian Williams used the tax returns of the former Massachusetts governor as a weapon: "And it's fair to ask tonight, will you be explaining further the story of them, the back story....the amounts we've learned about today equaling unfathomable wealth for most Americans..."

Earlier in the evening, at the top of Nightly News, Williams was equally melodramatic: "...Mitt Romney, chose today to release his tax returns from the year 2010. He did it to help stop the questions about his wealth, but in releasing his taxes, he reveals what most Americans will regard as unimaginable wealth...." Williams signaled the media would not let go of the issue: "The numbers in these returns will likely get talked about for the rest of the way in this campaign." 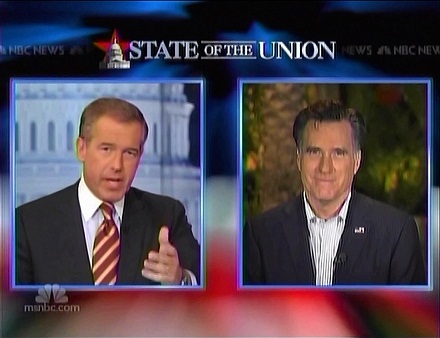 The article goes on to note that apartments in that building at the time ranged from "$2 to $27 million."

In response to Williams, Romney pointed out: "If you add together my taxes and my charitable contributions, I think in the most recent year it looks like it's over 40%, goes to charity and taxes."

Williams then cited New York's liberal Mayor – and namesake of the anchor's apartment building – Michael Bloomberg as "a fellow wealthy guy" who "pays the highest personal income tax rate, 35%." Williams continued: "He opposes tax provisions that, as he puts it, 'allows some wealthy individuals to pay a lower rate,' and went on to say that if it were up to him, he would end the concept of so-called 'carried interest.'"

Rounding out his grilling of Romney from the left, Williams wondered: "Did it get tougher for you to tell your story and attract your interest in the state [Florida] where you are now?...People are talking about exotic investments in Switzerland and Luxembourg and the Cayman Islands. Did this make it tougher for you?"

Read the complete transcript of the January 24 interview.