Teasing a story on former House Speaker Newt Gingrich entering the presidential race at the top of Thursday's NBC Today, co-host Meredith Vieira proclaimed: "Political hurdle. Newt Gingrich launches his run for the White House, but will his two divorces and an admitted affair during his time as House speaker hurt his chances of becoming president?"

Later, fellow co-host Matt Lauer introduced a report on Gingrich by declaring: "He is perhaps the best known Republican in the field to date. But Gingrich also has a messy personal life that includes two divorces, three marriages, and a lengthy affair." Correspondent Michael Isikoff described how, "Everywhere he goes, Newt Gingrich hears the questions [about his personal life]....Gingrich, who once campaigned as a family values candidate, has been dogged for years by criticism of marital infidelity..." 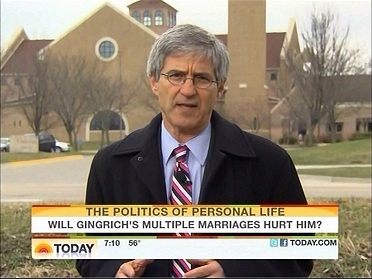 While Gingrich's multiple marriages and infidelity will certainly be an issue in the campaign, it was the sole focus of the show's coverage of the candidate entering the race. None of Gingrich's candidacy announcement was included in Isikoff's report.

In contrast, on the October 3, 1991 NBC Nightly News, correspondent Lisa Myers covered the announced candidacy of another politician with a "messy personal life" very differently: "His prescription – an ambitious agenda to make government work and help the forgotten middle class...A star since first elected Governor at age thirty-two, [Bill] Clinton is less driven by ideology than by what works...Name a problem, Clinton probably has a solution."

On Thursday, Isikoff made mention of Clinton as he continued to go after Gingrich: "Almost always by his side when he campaigns, his wife, Calista....their relationship actually began seven years earlier, while she was a young congressional staffer and Gingrich was married to his second wife....The affair with Calista continued the entire time Gingrich was speaker, including when he called for the impeachment of Bill Clinton for lying about Monica Lewinsky."

Following Isikoff's report, Lauer discussed Gingrich's chances with chief White House correspondent Chuck Todd and briefly noted some of the former Speaker's strengths: "...there is some baggage that comes with Newt Gingrich. But, let's talk about the other side here. This is a guy who has cultivated a reputation as an ideas guy. He is also someone – man this guy can raise money....So what are his chances?" Todd replied: "His chances really depend on who else gets in the race at this point....He's there if everybody else falters."

Here is a full transcript of the May 12 segment:

MEREDITH VIEIRA: Political hurdle. Newt Gingrich launches his run for the White House, but will his two divorces and an admitted affair during his time as House speaker hurt his chances of becoming president?

MATT LAUER: Now let's turn to politics and the 2012 presidential race. As expected, former House Speaker Newt Gingrich made it official on Wednesday, announcing that he is, in fact, running for president. He did that on YouTube and Twitter. He is perhaps the best known Republican in the field to date. But Gingrich also has a messy personal life that includes two divorces, three marriages, and a lengthy affair. Here's NBC's national investigative correspondent Michael Isikoff.

[ON-SCREEN HEADLINE: The Politics of Personal Life; Will Gingrich's Multiple Marriages Hurt Him?]

CHRIS WALLACE [HOST, FOX NEWS SUNDAY]: I want to talk about your personal life. I hate doing it.

NEWT GINGRICH: I think you share your life's experiences and you admit that you've had weaknesses and you've had failures, and you've gone to God to seek forgiveness and to seek reconciliation.

ISIKOFF: Gingrich is trying hard to reach out to evangelicals and it's what recently brought him to this convention of pastors in Iowa. As many as 60% of Republican caucus-goers in Iowa identify themselves as evangelical Christians and that's a voting block that poses a particularly big challenge for Newt Gingrich.

BRYAN FISCHER [AMERICAN FAMILY ASSOCIATION]: The problem with Mr. Gingrich is not once, but twice he has violated that solemn and sacred oath and that's why it's a show-stopper for me.

ISIKOFF: Gingrich, who once campaigned as a family values candidate, has been dogged for years by criticism of marital infidelity and that he left both of his ex-wives when they had serious illnesses. One was in the hospital being treated for cancer. The other had been diagnosed with MS.

GINGRICH: There's no question that at times in my life, partially driven by how passionately I felt about this country, that I worked far too hard and that things happened in my life that were not appropriate.

ISIKOFF: Almost always by his side when he campaigns, his wife, Calista, 22 years younger than Gingrich. Married in 2000, their relationship actually began seven years earlier, while she was a young congressional staffer and Gingrich was married to his second wife, Marianne. The affair with Calista continued the entire time Gingrich was speaker, including when he called for the impeachment of Bill Clinton for lying about Monica Lewinsky.

GINGRICH: Because it means the power comes from God.

ISIKOFF: Today, Gingrich touts his recent conversion to Catholicism and the nation's need for spiritual renewal. He's also using money, lots of it, through a sprawling network of organizations and formally known as 'Newt Inc.' One of these groups, Renewing American Leadership, is specifically designed to win back the hearts of evangelicals. It's mission, to promote 'America's Godly heritage.'

GINGRICH: To help people of faith take back their own country.

ISIKOFF: The group is run by Rick Tyler, who's also been Gingrich's spokesman for the past ten years.

RICK TYLER: I talk to these pastors all the time, and I don't think there's any doubt that they find him to be genuinely repentant of past failures.

ISIKOFF: Is it going to be an issue in the campaign?

ISIKOFF: Renewing American Leadership sponsors events, like a fast and prayer campaign last fall that urged candidates for office to sign a pledge to uphold the 'sacredness of marriage.' And in Iowa last fall, the group's political arm spent $150,000 on a successful campaign to oust three state judges who upheld same-sex marriage. Bob VanderPlatz was chief spokesman for that campaign. Gingrich was able to provide the funding that allowed you to get out that message?

BOB VANDERPLATZ: There's no doubt. If we did not have the initial funding, there's no way you could even get started. You couldn't get out of the starting gate. So that was crucial resources.

ISIKOFF: But even supporters admit Gingrich still has work to do.

VANDERPLATZ: My message to Newt was be transparent, be authentic, be humble about it, and you have to show a growth of maturity. You have to show that, 'I've matured, I've grown.'

ISIKOFF: A recent NBC/Wall Street Journal poll shows just how much his personal life may matter. 51% of Republican voters said they were uncomfortable with a candidate who'd had multiple marriages. Matt.

LAUER: Alright, Michael Isikoff. Michael, thank you very much. We appreciate it. Chuck Todd is NBC's chief White House correspondent and our political director. Chuck, good morning to you.

[ON-SCREEN HEADLINE: Obama vs. TBA; Who Will GOP Run Against the President?]

LAUER: So we got the tweet on Wednesday, Newt Gingrich is in, and as Michael just laid out, there is some baggage that comes with Newt Gingrich. But, let's talk about the other side here. This is a guy who has cultivated a reputation as an ideas guy. He is also someone – man this guy can raise money. I think he raised something like $32 million between 2009 and 2010, that dwarfs  what the other potential candidates have raised combined. So what are his chances?

TODD: Look. His chances really depend on who else gets in the race at this point. He is sort of this guy that sits out – reminds me of Joe Biden and Chris Dodd during the 2008 race. He's there if everybody else falters. He could be the guy that is the best debater. He may do very well in the debates. He's very good at that. He's very good in the media, very quick wit and can look like the smartest guy in the room. The problem for Gingrich, besides the personal issues, I think is going to be the fact that of all the candidates that are likely to run, he's going to look like the most Washington candidate. This is not the year to look like a Washington candidate.

LAUER: You talk some others who may run, Mitt Romney, a lot of people think he will run. He's going to give a speech today on health care. This is an Achilles' heel for him, Chuck. I mean, he's the guy who passed a health care law in Massachusetts that is strikingly similar to the Obama health care law, the law that Republicans hate. How is he going to get past this issue?

TODD: Well, one thing that the Romney folks are doing is trying to talk about it and distance themselves before he formally announces. So he's doing this speech today in Michigan, and in talking with folks around Romney, they say, 'Look, after this speech they hope that Republicans see that he is for repealing President Obama's health care plan and that he's got an idea to replace it.' The problem for Romney is the issue for a lot of these Tea Party conservatives isn't the fact that somehow President Obama's health care plan and Romney's health care plan are similar. The problem is that Romney was for this mandate even in the state of Massachusetts. Tea Party Republicans don't want government telling them what to do, whether it's on the federal level or on the state level, Matt.

LAUER: Let me end with Donald Trump. He fell considerably in the polls over the last week. He made a comment recently, saying he had no idea that he was going to get hammered as much as he's gotten hammered over the last couple of weeks. I thought all signs were leading to him running for president. Do we see some reconsideration now?

TODD: Well, what's interesting is that we're not hearing from him as much in the last couple of weeks. He's not calling up reporters complaining about his coverage anymore. It seems that this has been a passing fancy for him. He realizes that this has probably been destructive to his brand. The President embarrassed him, frankly, at the White House Correspondents Dinner, with him sitting in the audience. And it wasn't just him, it was the other comedian that was up there as well. He takes all this stuff personally, Matt. You know it well. I know it well. This thing seems to be done and frankly it's not a surprise. It's just surprising that it happened so fast.

LAUER: Well, or he could surprise us and keep going with it.

LAUER: You never know with Donald Trump, Chuck, and we shouldn't try to predict his future.

LAUER: Alright, Chuck. Thanks very much, I appreciate it.

TODD: Alright, you got it.