In an interview with AlterNet's Don Hazen on Tuesday, MSNBC host Cenk Uygur slammed Fox News and bragged how he would take them on in the ratings: "For so long, they have controlled the national conversation....I want to drain them of that power. I want to put them back in the cave they came from....I also plan to beat them in the ratings and make them fear me."

Uygur, who also hosts the left-wing webcast The Young Yurks, has been filling in as anchor for the 6PM ET hour on MSNBC following the departure of Countdown host Keith Olbermann and the reshuffling of the cable news channel's prime time lineup. He is currently in negotiations with MSNBC for a permanent show. Despite Uygur's boasting, as of February 7, FNC's Special Report with Bret Baier was bringing in over 2.1 million viewers, MSNBC Live at 6PM ET had an audience just under 600,000. 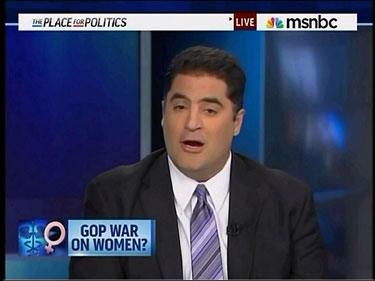 In the interview, Uygur went on to rant: "I think defeating Fox – and more importantly, getting the rest of the media to understand they do not do legitimate news – is very important. I hope to do that through pointing out their hypocrisy, propaganda and general foolishness." When Hazen asked about the liberal commentator's "short-term vision," Uygur again proclaimed: "If I stay at 6pm on MSNBC, I plan to beat Fox and be number one in the ratings. On the internet, 'The Young Turks' is already the largest online news show in the world and I plan to continue that domination."

Earlier in the exchange, Uygur took a shot at network news, including his now colleagues at NBC News, "There are so many things that the mainstream media gets wrong that it's an awesome opportunity to be able to correct them from the inside. I hope I can be a progressive voice that presents our perspective without a filter – and does it with strength."

— Kyle Drennen is a news analyst at the Media Research Center. You can follow him on Twitter here.