A major staff shakeup has occurred on the CBS Early Show. Starting January 3, current co-hosts Harry Smith and Maggie Rodriguez, along with weatherman Dave Price, will all be replaced. Saturday Early Show co-host Chris Wragge and the broadcast's current news reader Erica Hill will take over for Smith and Rodriguez, while former ABC weather person Marysol Castro will take the place of Price.

Associated Press television writer David Bauder reported the changes on Tuesday, noting: "CBS News is completely overhauling 'The Early Show' to give the broadcast team a fresh look." The network morning show has long trailed in the ratings, consistently coming in a distant third compared to NBC's Today and ABC's Good Morning America. 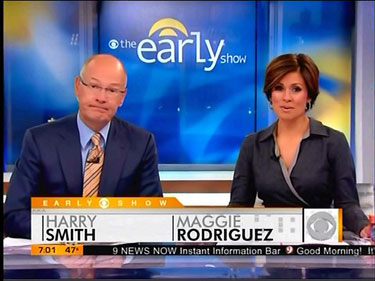 According to Baudner, reporter and Saturday Evening News anchor Jeff Glor will become the Early Show news reader. Smith will remain with the network as a correspondent and primary fill-in anchor for the Evening News and Face the Nation. Rodriguez and Price will also stay with the network, but in an uncertain capacity.

In an internal CBS News memo obtained by TVNewser, CBS News & Sports President Sean McManus confirmed the changes: "All the members of the new team are gifted and accomplished morning show broadcasters.  Erica, Chris and Jeff are, of course, familiar CBS faces who have already done outstanding work on TES in different roles.  Marysol is a terrific talent, with years of morning show experience covering weather and reporting feature stories."

Of the departing staff, McManus declared: "Harry, Maggie and Dave are outstanding journalists and consummate professionals.  Day in day out, they have delivered excellent broadcasts with tremendous creativity and journalistic integrity, covering the world, anchoring and reporting with distinction.  They are moving on to new and significant roles at CBS News that capitalize on their talents and their interests."