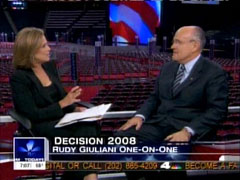 Appearing on all three network morning shows on Wednesday, Rudy Giuliani was inundated with questions about McCain vice presidential nominee Sarah Palin, including one question by Meredith Vieira on NBC’s Today: "So, what do you say to the people who are questioning the judgment of McCain in selecting her? He has always been known as a maverick, but also as somebody who can veer towards the reckless side. Some see this as a decision that was made in haste, I.E., reckless."

Meanwhile, on the CBS Early Show, Giuliani criticized the media for questioning Palin’s parenting ability: "They're asking can she be vice president and be a mother. Come on." Co-host Maggie Rodriguez replied: "So you're saying you have no doubt and voters shouldn't either. That she can do it?" Giuliani fired back: "Where are the feminists? I mean, is it just -- there are all these feminist groups. Where are they?" Then Rodriguez argued that questioning Palin as a mother was fair game: "I think they're fair questions. It's a lot to juggle."

On ABC’s Good Morning America, co-host Diane Sawyer was concerned with Palin’s travel habits: "Has Governor Palin traveled? Where?" Giuliani replied: "I'm sure she has a real knowledge of what's going on in the world. I'm sure she's going to be able to demonstrate that, but all things that, you got to, in fairness, before everybody jumps on her, I mean, when Barack Obama started they certainly didn't all jump on him this way." Sawyer then wondered: "We had heard she that got her first passport in order to go to Kuwait once and then go to Germany and that's the extent of her travel. Bother you?" Sawyer went on to ask: "She's going to be speaking tonight. Everyone says it's high stakes. It is a kind of make-or-break night for her. Should she be nervous?"

On the Early Show, Giuliani also raised the issue of the media not sufficiently vetting Barack Obama after Rodriguez declared: "There are questions about her [Sarah Palin’s] experience, which I know have been raised about Barack Obama as well." Giuliani responded: "No, they haven't...Nobody's looked into his relationship with a foundation he was on. Nobody has looked into -- nobody has looked into the fact that he's never traveled -- never traveled south of the border." Rodriguez dismissed the charge: " I don't think that's true. In fact, I've even reported that...But let me tell you the difference. If Barack Obama...is elected president, it's because voters put him there...If Sarah Palin has to move into that slot, it'll be because God forbid something happened to the president. Do you think she's ready to step in?" Of course, people would have voted for Sarah Palin as well if she becomes vice president.

On Today, in response to Vieira’s suggestion that McCain’s decision to pick Palin for VP was "reckless," Giuliani argued: "I think the fact that there is a woman on the Republican ticket has got the media in a- in a tizzy and they are asking questions they would never ask if there were a man there, including the question that I mentioned about whether, you know, she's going to have enough time to be- to be vice president and be a mother. Never asked a man that, ever. And I think the language they've pried into her personal life, honestly, my own opinion, it's indecent and disgusting and they should leave her daughter alone."

On CNN’s American Morning, co-host John Roberts stressed Giuliani’s differences with Palin: "Now, she has conservative social views. You're a moderate. Are you comfortable with her pick on that front?" Giuliani replied: "Sure. Look, my part is a broad party. I understand that I'm part of a party that doesn't agree with me on everything. But, I agree on the main principles."

Roberts then turned to Palin’s church: "And she recently gave a speech at the Assembly of God Church in Wasilla, in which she talked about Iraq. And she appeared to talk about the deployment of U.S. forces in terms of carrying out almost a message from God. Let's take a listen to how she put it." A video clip of Palin was played: "Our national leaders are sending them out on a task that is from God. That's what we have to make sure we're praying for. That there is a plan and that that plan is God's plan. So, bless them with your prayers." Roberts asked: "Mr. Mayor, what do you think of that statement, that she seems to suggest the deployment of troops is somehow related to a task from God?" That same clip of Palin was also featured at the top of NBC's Today on Wednesday.

After broadcasting the clip to the world, Roberts went on to add: "But, as we know, there are a lot of sensitivities particularly in the Middle East, to that sort of talk. Remember when President George Bush talked about a crusade and got us in trouble."