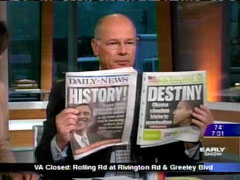 On Wednesday’s CBS "Early Show," co-host Harry Smith began the show by declaring: "A place in history. Barack Obama claims the Democratic presidential nomination. The first African-American to do so." While Obama’s win was indeed historic, correspondent Dean Reynolds later reported on Obama’s "ecstatic" supporters and the Senator’s humility: "...despite the thunderous, indeed ecstatic, applause at the arena in St. Paul, Barack Obama was not gloating. He dutifully paid homage to his defeated rival and her [Hillary Clinton’s] legion of supporters."

Reynolds soon followed up describing John McCain's speech as the beginning of a Republican "attack" against Obama: "John McCain is waiting for him and Tuesday night he sounded a theme of attack." In a later interview with McCain, co-host Maggie Rodrigguez wondered: "It's one thing to say that you are the better candidate. It's another to say that he [Barack Obama] is not qualified. Which is it?" Rodriguez also linked McCain, who spoke from New Orleans, to failures in Hurricane Katrina: "Here in New Orleans, a city that symbolizes one of the greatest failures of the Bush Administration, the response after Hurricane Katrina, you spoke a lot about failings of this administration. Are you trying to distance yourself from President Bush?" 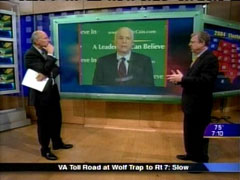 There's no energy here. There's no crowd behind him the way there was with Senator Clinton and Senator Obama. You see the slogan, 'A Leader You Can Believe In' that's designed to say 'I'm the Commander in Chief and Obama's credentials are weak.' But you can barely read the slogan because he's blocking it. Also, if you were the oldest candidate ever to run for president and you want to communicate a sense of dynamism, you want to surround yourself with energy, and that is not what happened in McCain's event last night.

Compare that to how Smith and Greenfield described the Obama event:

SMITH: Then again we go to the Obama rally in St. Paul, in the very building where the Republicans will have their convention.

GREENFIELD: Yes, do you think that was a coincidence?

GREENFIELD: Well, there are a couple of things about this. One, I loved this moment. It wasn't quite as passionate as Al Gore's kiss at the 2000 convention, but when they [Barack & Michelle Obama] banged their fists together, there's a kind of youthfulness about that. The other thing is, here Obama is actually in effect giving a acceptance speech in a convention hall two months before he will really give the acceptance speech. A lot of people have said there are too many of these things. He should be down on the ground. Tonight was the -- last night was the night for that.

While McCain’s speech certainly did not have the same style and excitement as Obama’s, Smith and Greenfield focused entirely on image, not on what was actually said in either speech.

Here are the full transcripts of the segments:

HARRY SMITH: A place in history. Barack Obama claims the Democratic presidential nomination. The first African-American to do so.

BARACK OBAMA: America, this is our moment. This is our time.

HARRY SMITH: Take a look at these headlines, folks. In the New York papers this morning, 'Destiny,' 'History,' first African-American to be selected as the standard bearer for a party.

MAGGIE RODRIGUEZ: The man who the local papers here announce in big, bold letters, 'Obama seals the nomination and makes history as the first black man to lead a party ticket.' CBS News national correspondent Dean Reynolds was with Senator Obama last night as he gave a victory speech in St. Paul, Minnesota, and he joins us now from Washington. Dean, good morning.

BARACK OBAMA: America, this is our moment.

REYNOLDS: After 16 months of non-stop campaigning, it was safe to exhale.

OBAMA: Because of you, tonight I can stand here and say that I will be the Democratic nominee for the President of the United States of America.

REYNOLDS: But despite the thunderous, indeed ecstatic, applause at the arena in St. Paul, Barack Obama was not gloating. He dutifully paid homage to his defeated rival and her legion of supporters.

OBAMA: Our party and our country are better off because of her and I am a better candidate for having had the honor to compete with Hillary Rodham Clinton.

REYNOLDS: He will need to be a better candidate. John McCain is waiting for him and Tuesday night he sounded a theme of attack.

JOHN MCCAIN: For all his fine words and all his promise, he has never taken the hard, but right, course of risking his own interests for yours.

REYNOLDS: McCain also has an eye on the Clinton supporters and, in his speech in New Orleans, went out of his way to praise their champion.

MCCAIN: The media often overlooked how compassionately she spoke to the concerns and dreams of millions of Americans. And she deserves a lot more appreciation than she sometimes received.

REYNOLDS: But will McCain say that if Clinton winds up Obama's running mate? Sources tell CBS News that efforts toward an Obama/Clinton ticket have been quietly endorsed by Clinton's campaign. Though it's unclear that she wants the job, to say nothing of whether Obama would seriously consider offering it to her. His campaign is said to believe the party will soon unite behind him, dimming the need for the so-called 'dream ticket.'

HILLARY CLINTON: This has been a long campaign, and I will be making no decisions tonight.

REYNOLDS: Clinton spoke to her loyal supporters in New York City, sounding unwilling to surrender but unsure of what to do next. So she asked for guidance.

CLINTON: I want to hear from you. I hope you'll go to my website at hillaryclinton.com and share your thoughts with me and help in any way that you can. To determine how to move forward with the best interests of our party and our country guiding my way.

REYNOLDS: And until she decides, her next move will be grist for much speculation. There's no doubt however, what Barack Obama's next move will be. It's on to the general election and John McCain. Maggie.

RODRIGUEZ: And as Senator McCain told me, he is ready for battle. Dean Reynolds, thank you. My interview with Senator McCain is coming up in a few moments. But first, with more on Obama and Clinton, let's go back to Harry in New York.

HARRY SMITH: We want to go back to Maggie who is in New Orleans and, of course, spoke to John McCain just last night. Good morning again, Maggie.

MAGGIE RODRIGUEZ: Good morning, Harry. Voters who were choosing between Hillary Clinton and Barack Obama were choosing between two candidates who share very similar platforms. So says the Republican nominee John McCain, who left no doubt now what his argument will be as this general election kicks off. It will focus on, as it did here last night, what he calls 'stark differences' between a veteran and a rookie. What is the single most important difference between you and Barack Obama?

JOHN MCCAIN: I think our approach to government in everything from the role of government in health care, in taxes, in regulation, to our nation's security.

RODRIGUEZ: You argue that you're older. You have more experience. You feel that you have a better vision for this country. But Senator Clinton made all the same arguments and still lost to Senator Obama. Do you worry that you may be underestimating his appeal to voters?

MCCAIN: Oh, no. I think he has -- he has done a very fine job, and I congratulated him tonight. But I think Americans are just beginning to know Senator Obama. But we have these stark differences, and I'll let the American people choose. It's about leadership. And it's about the future.

RODRIGUEZ: It's one thing to say that you are the better candidate. It's another to say that he is not qualified. Which is it?

MCCAIN: Well, I leave that judgment up to the voters.

RODRIGUEZ: What do you personally feel?

MCCAIN: Well, I believe that he does not have experience, and I think he has exercised very bad judgment on national security issues and others.

RODRIGUEZ: Here in New Orleans, a city that symbolizes one of the greatest failures of the Bush Administration, the response after Hurricane Katrina, you spoke a lot about failings of this administration. Are you trying to distance yourself from President Bush?

MCCAIN: No. I'm trying to make sure that the American people know that there have been serious differences between myself and the Bush Administration long before I ever ran for President of the United States. I think the American people know that I'm -- I'm who I am. And that's a person who has stood up to both Democrats and Republicans when I thought -- when I knew that I -- what was the right path to take.

RODRIGUEZ: You talk about being bipartisan. Would you consider someone from another party as your vice president?

RODRIGUEZ: That's not a no.

MCCAIN: I think -- no, no, I mean, someone who is your vice president, the prime qualification is who shares your values, your principles and your goals and is prepared to take your place immediately. But I really can't get into names because as soon as we do, then we go through a -- actually, what ends up is an invasion of people's privacy.

RODRIGUEZ: Finally, you ready for one-on-one combat? You have some experience in that arena.

MCCAIN: It's going to be an interesting time. But I really believe that we must conduct a respectful campaign, and it's going to come down as to who is most qualified to lead. And I believe I can prevail.

RODRIGUEZ: Jeff Greenfield noted how many times Senator McCain used the word 'change' in his speech here last night. I couldn't help but notice how many times he used the word 'differences' when he and I sat down face to face. And I think that's what we can expect from John McCain in the next five months, for him to highlight the differences not only between him and Barack Obama, but between him and President Bush. I'll have much more from New Orleans ahead this morning.