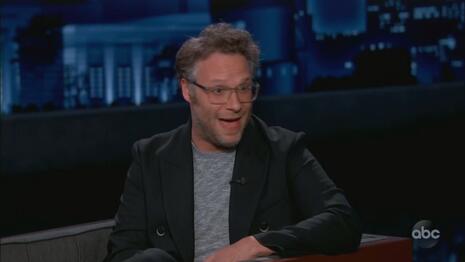 Many big cities in California are facing an alarming crime wave with brazen mass robberies and car burglaries. But some millionaire liberal actors think that’s no big deal.

Actor Seth Rogen is getting backlash for seeming to defend your car getting broken into as just a normal part of life. The unfunny comedian and diehard liberal was responding to Youtube filmmaker Casey Neistat complaining about getting robbed in “crime-riddled 3rd world sh**hole” Los Angeles. Rogen tweeted back:

When Neistat, who’s also worth millions, responded, “i can still be mad tho [sic] right? feel so violated,” Rogen doubled down on his callous response:

“I don’t personally view my car as an extension of myself and I’ve never really felt violated any of the 15 or so times my car was broken in to [sic]…” he stated.

You can be mad but I guess I don’t personally view my car as an extension of myself and I’ve never really felt violated any of the 15 or so times my car was broken in to. Once a guy accidentally left a cool knife in my car so if it keeps happening you might get a little treat.

Several users on Twitter called out Rogen’s privilege as a millionaire actor who won’t face the financial burden most Americans would getting robbed, as well as his careless attitude towards a stranger violating your personal property. Rogen responded in his usual mature, civil way by telling them to "go f**k themselves."

His net worth is 80 million dollars. He's out of touch with reality. These silly little tweets he puts out saying, “you live in a big city, dude. It's great here.” Well you know what? Just by normalizing theft and normalizing the fact that personal property was taken, is again just going to the allowance for increased criminal activity, which is we're seeing. Now you have mayors you have governors who are too afraid to step back against this because they’re going be cancelled….

It's no wonder that the media also downplays these stories, as these crime waves tend to happen in Democrat-controlled cities.