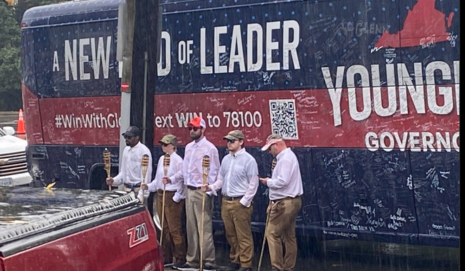 The corrupt Lincoln Project was forced to own up to a slimy stunt they orchestrated earlier today, in a pathetic effort to sway the Virginia governor’s race. The anti-Trump group, which has been heavily promoted by MSNBC over the years, hired Democrat operatives to pose as “white supremacists” supporting Republican candidate Glenn Youngkin in a photo-op outside a campaign stop in Charlottesville on Friday. The small group was holding Tiki torches in a too-obvious reference to the 2017 violent rally in Charlottesville. Unfortunately for the Democrats, they didn’t get away with it for long.

However, NBC’s Charlottesville affiliate bought the act. Reporter Elizabeth Holmes tweeted about the fake Youngkin fans without any sort of skepticism, before correcting hours later:

These men approached @GlennYoungkin’s bus as it pulled up saying what sounded like, “We’re all in for Glenn.” Here they are standing in front of the bus as his campaign event at Guadalajara started.@NBC29 pic.twitter.com/l681ejyBjc

She wasn’t the only one. MSNBC regular Frank Figliuzzi also condemned the act of “hate” in a later-deleted tweet, according to Real Clear Politics.

But Holmes’ tweet garnered skepticism as well. Conservative journalist Alec Sears, who formerly interned for NewsBusters, sent out a Twitter thread identifying many of the people pictured as Virginia Democrat activists. He also noted how Democrat accounts for the McAuliffe campaign were promoting this Tiki torch demonstration as real:

This is so clearly a political operation organized by @AdamParkhomenko it's not even funny.

And I have the receipts.

A reporter for the left-wing Vice News ultimately got The Lincoln Project, and a Democrat operative who worked with them, to fess up to the whole thing. In response, the Lincoln Project put out a statement boasting about the false flag they orchestrated as somehow a reprimand on Youngkin’s campaign.

Fox News' The Five later mocked the incident as "Democrats in panic mode":

Both Youngkin and McAuliffe denied playing any role in the stunt and condemned it.

However this whole event seems very fishy considering how McAuliffe’s campaign has had a really terrible week plagued by lies and fake attack ads and is falling behind Youngkin in polls.