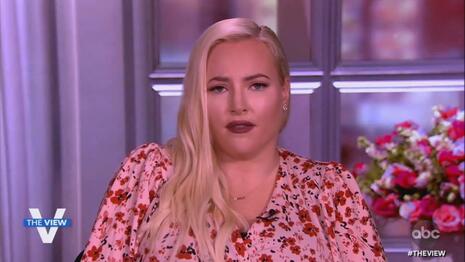 According to the Washington Post, the end to “exhausting” Meghan McCain on The View couldn’t come fast enough. TV critic Inkoo Kang spun the conservative co-host’s departure from the show she hosted for four seasons as a welcome relief, smearing her in no uncertain terms as the “reality villain” viewers had come to “love to hate.”

From the get-go, Kang put forth a negative portrayal of the sole conservative host on the political daytime talk show. Despite being outnumbered and frequently bullied by her liberal peers, Kang claimed that McCain herself “reflected the bitter polarization of the past half-decade.” That’s when the media critic really let loose, pummeling McCain as the villain of the show:

If “The View” became, a la wrestling, a kind of regularly choreographed scuffle among archetypal “characters” with years-long histories of conflict with one another, McCain made for a highly effective heel, a love-to-hate reality villain who brought a badly needed wild-card energy to the show and whose best moments came from needling the other panelists or puncturing their idealism or self-righteousness. And, as in the ring, the confrontations may have been planned, but some of the injuries were definitely real, despite guardrails in place to soften the blows.

Kang was nasty with her other descriptors for McCain: “prickly,” “snotty” “cranky” “self-absorbed” and an “internet punching bag.” She even slimed the talk show host for not wanting to share the intimate details of her own marriage to fellow conservative media commentator Ben Domenech:

McCain seldom got as squishy as her fellow panelists; for a “View” star, she was conspicuously stingy with details about her domestic life. (Given what a lightning rod her husband — Ben Domenech, the publisher of the right-wing site the Federalist — is himself, I don’t blame her for not giving her opponents more fodder.) But in most other respects, McCain felt very much herself, for better and for worse: smart, snotty, cranky, wonky, sharp-elbowed, self-absorbed, well-connected, even cosmopolitan, in her own sheltered way…The 36-year-old McCain could sound a scathingly petulant 16, or an irreparably curmudgeonly 76.

But while Kang saw McCain as the villain, conservatives saw her as a much-needed fighter in a media landscape dominated by liberals. Even Kang could admit that, while at the same time strangely claiming her ideas were “unconvincing:”

As a pundit, McCain was seldom convincing on the strength of her ideas, but she was excellent at piercing the liberal bubble her co-hosts tended to build around themselves as well as at bringing up widely shared grievances (fair or unfair) by those who don’t live on the coasts. She frequently reminded (or attempted to persuade) the other panelists that their liberal ideas were unpopular, citing polls or political realities that Behar and company would rather ignore.

Other headscratching moments from the slimy Post piece include Kang describing host Sunny Hostin as the “intellectual heavyweight,” and wondering why McCain didn’t want to team up against the libs with “natural ally” Ana Navarro.

McCain’s always irritated the media. Last year, The New York Times ran an editorial complaining she was a big “problem” for the show.

It’s rare to see a conservative willing to ruffle feathers in the media. Let’s hope her replacement is just as good at fighting back against the predominant leftist narrative.