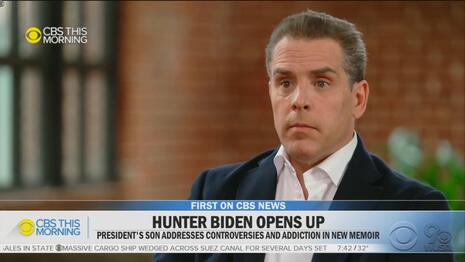 Taxpayer-funded NPR continues to desperately try to cover up the Hunter Biden laptop story, which may implicate our sitting President. After audaciously admitting they would not cover the story last October, the underhanded news outlet was caught this week spreading lies to silence the story again.

On Wednesday, senior editor and correspondent Ron Elving joined the rest of the media in promoting the president’s youngest son’s new memoir, which focuses on his drug addiction. But one particular line drew critics’ eyes. It read the New York Post’s laptop expose was “discredited by U.S. intelligence and independent investigations by news organizations."

Except, it wasn’t. In fact, former director of national intelligence, John Ratcliffe as well as the DOJ and FBI denied the notion put forward by Democrats like Adam Schiff that this was part of a Russian disinformation campaign.

After getting called out for his big lie, the senior editor of NPR offered a paltry, tiny correction twenty four hours later...at the very end of his article. It read:

Inside the updated text, Elving still characterized the damning laptop tied to Hunter as hogwash:

The last gasp of Giuliani's campaign against the Bidens featured a laptop supposedly obtained from sources that would document the younger Biden's drug use and other offenses. Numerous news organizations cast doubt on the credibility of the laptop story.

To make matters worse for NPR, even Hunter Biden himself admitted today the laptop “certainly” could be his.

Back in October when the New York Post expose came out, NPR outright rejected the notion they’d have to cover a legitimate, and yes negative, story that likely implicates the Democrat candidate. Check out this pitiful statement put out by NPR’s public editor:

“We don’t want to waste our time on stories that are not really stories...just pure distractions.”

Why haven't you seen any stories from NPR about the NY Post's Hunter Biden story? Read more in this week's newsletter➡️ https://t.co/CJesPgmGvo pic.twitter.com/jAi7PnpbZf

Any scandal involving a Democrat is a “distraction” to the media, while any involving a Republican is talked about for weeks or months on end.