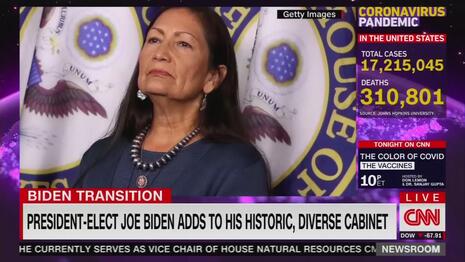 Another one of Joe Biden’s cabinet picks is being celebrated and ushered in with open arms by the media, without not a word of scrutiny. Last week, the President-Elect tapped an anti-religious bigot and abortion enthusiast for Health and Human Services Secretary, but you would never know it by how the media glowingly reported on his nomination. Similarly, yesterday’s announcement that Biden picked an Antifa-defending, radical Democrat congresswoman, who bullied and smeared the Covington Catholic students in 2019, to be a cabinet secretary, was met with similar praise from journalists.

Freshman Rep. Deb Haaland (D- N.M.) was nominated for Secretary of the Interior; she will be the first Native American to be a cabinet secretary. (Though way back in 1929, Republican Charles Curtis became the first Native American Vice President.)  In fact, that’s all CNN, MSNBC and CBS would say about her in their Friday morning broadcasts today, as you can see in the video below.

But The Free Beacon noted, the Democrat should be called out for participating in the vicious smears against MAGA-hat-wearing Covington Catholic students in 2019, when they were confronted by liberal protesters, including Native American activist Nathan Phillips, during a trip to Washington D.C.

At the time, the congresswoman shared a false tweet and accusing the teenagers of “blatant hate, disrespect and intolerance” towards a Native American “veteran:”

This Veteran put his life on the line for our country. The students’ display of blatant hate, disrespect, and intolerance is a signal of how common decency has decayed under this administration. Heartbreaking. https://t.co/NuPnYu9FP4

As well all know, not only was Phillips not a Vietnam veteran, but the students were not the aggressors in this incident and did nothing wrong. For her hate-mongering, Haaland was named in former student Nick Sandmann’s defamation lawsuit. According to the lawsuit, each person and media organization in the suit was was given the opportunity to “correct, delete and/or apologize for their false statements, but each refused, continuing to circulate the false statements about these children to this very day on their social media platforms they personally control.”

While Haaland leaped to accuse MAGA hat-wearing teenagers minding their own business of "hate and indecency" which she refused to apologize for, she's also rushed to defend violent left-wing anarchists, calling them "peaceful protesters" on CNN in August of last year.

As you might expect, Haaland is far to the left on the environment as well; she supported the Green New Deal and her nomination was applauded by environmental activists.

You can contact CNN Newsroom's advertisers Consumer Cellular and Cadillac to voice your displeasure about CNN hiding the truth about Biden's radical cabinet picks, at the Conservatives Fight Back page here.