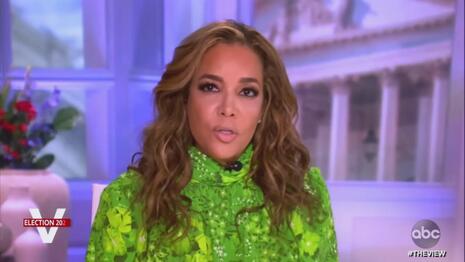 Well that didn’t last long. Democrats insisted they were going to heal and unite this country but are going back on that promise already. New York Democrat congresswoman Alexandria Ocasio-Cortez sent out a tweet last week suggesting "Trump sycophants" be punished in their future endeavors by going on an enemies list. Despite getting backlash for her alarming tweet, the hosts of The View were less alarmed; one co-host even adamantly defended it.

Co-host Whoopi Goldberg started off the segment by paraphrasing the Democrat's tweet that read, “Is anyone archiving these Trump sycophants for when they try to downplay or deny their complicity in the future? I foresee decent probability of many deleted Tweets, writings, photos in the future.”

“Is she trying to make sure they're held accountable or is she sort of advocating cancel culture?” Whoopi asked co-host Sara Haines. Whoopi refused to comment on the Democrat's threat but she had harsh words for Republicans yesterday because they called for a fair election.

Haines was the only host to criticize Ocasio-Cortez's plan sounding like “McCarthyism:”

“This is a bit about archiving or making a list, remind you of the red scare and McCarthyism. It's a slippery slope to endorse this type of action,” she said adding that the congresswoman needs to follow Biden and Harris’s message of unifying the country.

But Sunny Hostin completely agreed with the congresswoman’s scary proposal that Republicans should be persecuted for supporting or working for the president:

HOSTIN: You know, I think that Trump, um, tear-gassed peaceful protesters for a photo op. I think the Trump ripped children from their parents. I think that Trump called NFL players sons of bitches I think that---for exercising their First Amendment rights. I think those people in his administration that not only drafted some of those policies but were complicit in some of those policies shouldn’t be forgotten. People like Kirstjen Nielsen, people like Stephen Miller, people like Kellyanne Conway, people like Vice president Mike Pence who was woefully inadequate of his role as the head of the coronavirus task force and people like Ben Carson and Betsy Devos, I don't think those people should be able to profit from their experience within the Trump administration. I don't think they should be forgotten. I don’t think we should look the other way. I think we need to remember because if you don't remember things then past becomes prologue. I do think people need to be held accountable for their actions and um I don't think it's reminiscent of McCarthyism at all.

Joy Behar, meanwhile suggested those who turned on Trump, like Anthony Scaramucci and Michael Cohen, be given a pass. “I think you have to be specific about who you'll target as collaborators,” she schemed.

But she reluctantly agreed with Haines that enemies lists were beneath them: “Every enemies list has been coming from the right. We don’t need to do it also,” she admitted to end the segment.

Democrats are already taking up Ocasio-Cortez’s suggestion, and they’re not just targeting White House officials, they’re targeting Trump supporters and Trump appointees as well. Former staffers for President Obama and presidential candidate Pete Buttigieg formed a “Trump accountability project” whose website briefly listed and categorized all the people they were monitoring before they made the list private.

Downy and CarShield sponsored this segment, you can contact The View’s advertisers at the Conservatives Fight Back page.