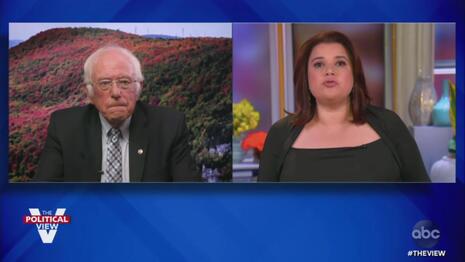 Democrat Senator Bernie Sanders joined The View hosts today to campaign for Joe Biden after Tuesday night’s presidential debate. Co-host Ana Navarro, a Biden surrogate, tried to get the “Democrat Socialist” to rally his far left supporters to vote for Biden. But just one question later, she asked him to sell Latino voters who don’t want a Socialist in the White House to vote Biden as well.

Navarro first asked Sanders to get his supporters to "get enthused and vote" for Biden:

First, in 2016 some of your supporters did not ever quite warm up to Hillary Clinton. She lost several states by less than 15,000 votes. It could have made a difference in the election. So my question is now in 2020, what do you do? What do you tell Bernie loyalists in the next 33 days so that you can get them enthused and get them out there to vote for Joe Biden? What's your message to those voters?

Sanders warned his far-left supporters with the left's dire message this was “the most important election in the history of the United States" so they needed to vote for Biden.

But immediately following this, Navarro also begged the Democrat Socialist to assure Latino voters in Florida that Biden is not a “socialist” or “communist sympathizer”:

SANDERS: No. No, of course, he's not. Nor am I or anybody I know. This is just one of the many, many lies that the Republican party is pushing.

While Biden distanced himself from the far-left Green New Deal during the debate, his running mate co-sponsored the legislation and even Biden's own website praises the radical plan:

But the hosts spent more time attacking Trump. The desperation was visible as each host attacked Trump as a racist, a national security risk, and someone who was going to take away everyone's rights. The hosts blew a gasket over Trump’s sloppy answer to Wallace over condemning white supremacists. Sunny Hostin and Joy Behar fumed he was a racist who refused to condemn white supremacy:

HOSTIN: I think what we saw last night is a president who can't defend his leadership on any of those important issues that we are facing, and so he went back to his core being, his core person, and that is that he is a racist.

Trump did not “refuse” to condemn white supremacists, as you can see by the transcript of the exchange with Wallace. Regardless, this claim is bound to be repeated as often by the media as the Charlottesville lie.

Hostin also lashed out against those against “any” American against critical race training propaganda in the workplace, bashing them as “un-American.”

The View desperately trying to get far-left and Latino voters to vote Biden was brought to you by advertisers Vicks and Philadelphia Cream Cheese.