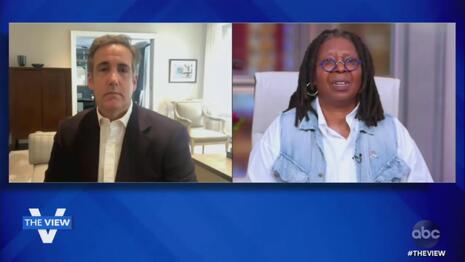 The president’s former lawyer who was convicted for lying to Congress, among his many financial crimes, delighted his liberal hosts with his wild tales from his new anti-Trump book, Disloyal.

But not before Meghan McCain started off the show grilling their guest on why she should believe him. “What made you change your tune other than money? And why should I believe you because you're an admitted liar?" she posed.

Cohen was allowed to deflect blame with absurd allegations he had "Stockholm Syndrome," which was when kidnapping victims feel loyalty to their captor. He also smeared thirty-something percent of the country as part of Trump's "cult."

“I was suffering from what she [my daughter] termed Stockholm Syndrome. My need to please him, very much like 30% of the population right now was greater than my ability to control my own moral compass,” Cohen whined. This nonsense was only encouraged by the other hosts.

After Behar fumed at Cohen's claims that Trump was a creepy predator, Cohen complained again he didn't do anything at the time because he was brainwashed: "I was apart of the cult, a big part of the cult, and there was really no wrong that he could do," he stated.

Whoopi Goldberg agreed with Cohen’s nasty comments about Trump supporters. “It's like being in a cult. You remember Jim Jones? It's the same mindset,” she touted.

Behar later begged for Cohen's advice on how to get brainwashed Trump supporters to "snap out of it." “Do you have any suggestions of what we can do to get these people to see the light the way you did?” she wanted to know.

Sara Haines also pleaded with the convicted felon to explain why Trump's administration stands by him:

HAINES: Can you explain why these people surrounding him are so willing to compromise their integrity, their character, their own legacies in their families all for Trump? What is it about him?

COHEN: [I]t's Trump Derangement Syndrome. It's being a part of a cult. It's being part of something that is bigger than you, and when he gives you this warmth, it's no different than a cult leader. You just want it, you’re willing to sacrifice your own moral compass.

Sunny Hostin was also excited by Cohen’s claim that Trump hated President Obama because he’s black. She egged him to call the President a racist bigot:

“[W]hat do you think is at the core of his obsession with President Obama and his need somehow to discredit him and disrespect him?” she asked, adding: “Is he a bigot? A racist?”

Whoopi saved the last question of the interview to bluntly point out Cohen's lying and lack of credibility: "Are you ever worried that some of this is going to come back and bite you in the butt?"

ABC giving free airtime to a convicted criminal's ramblings was paid for by advertiser Publishers Clearing House and CarShield. Contact them at the Conservatives Fight Back page.