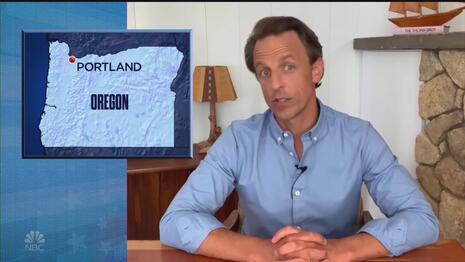 NBC’s Late Night is supposed to be a comedy show, but host Seth Meyers spends so much energy shamelessly defending the radical left, he might as well be a primetime host on MSNBC or CNN. On Wednesday night’s show, Meyers tried to gaslight his audience by  denying there’s violent anarchists in Portland, Oregon.

But to bolster his brazen lie, he first attacked conservatives as nutty conspiracy theorists, so why believe anything they say about Antifa?

The modern conservative movement is a paranoid movement obsessed with conspiracy theories. Remember, this is the same political movement that thinks the world scientists all got together and fabricated the climate crisis as part of an elaborate plot to outlaw airplanes and barbecues. And now those same lunatics think graffiti and light property damage constitute domestic terrorism. For example, take Acting Secretary of Homeland Security, Chad Wolf.

The propaganda continued as the late-night host attacked Wolf as a “fascist” for using the phrase “violent anarchists” repeatedly... to describe violent anarchist group, Antifa:

“It’s bad enough to sound like a fascist, but at least crack open a thesaurus” Meyers sneered.

After making some juvenile jokes about Wolf’s appearance, he continued shamelessly defending the domestic terrorism group: “Anytime the government is calling its own citizens, ‘violent anarchists’ should raise alarm.”

But the talk show host wasn’t done groveling before Antifa. He actually lied to his audience, claiming that the DHS is spreading “complete BS” about these rioters, he later called “peaceful:”

“So, what did these supposedly "Violent anarchists" do to deserve that name? Well, you'll be shocked to find out it's complete bull[ bleep ]," he stated, immediately playing a clip of MSNBC’s Chris Hayes dismissing the weeks long rioting and conflict as "graffiti and some light property damage." Meyers was incensed, ranting that DHS was sending in "secret police" to "kidnap" and "snatch peaceful protesters off the street:"

Graffiti? You're going full dictator over some graffiti. What's next? Are you going to send in S.E.A.L. Team Six to arrest lovestruck teens carving their initials into trees? 'Okay, he just finished carving the heart shape into the tree. Now he's going for the T.L.A, take the shot! Take the shot, Todd!'

That's right our government used graffiti to justify sending secret police to an American city to abduct protesters into unmarked vans without telling them who they are, where they're going, or why they've been arrested. But it would be bad enough if what they were doing was using secret police to enforce laws against graffiti. That's already chilling. What they're actually doing is even worse they're just snatching peaceful protesters off the street. They're kidnapping people and not even telling them what they're being charged with.

You'd have to be out of your mind to watch the videos in Portland and come away with, 'Hey, look at those peaceful protesters!"

Notably absent from Meyers’ monologue was ANY actual video footage from Portland.

Instead, he ended the segment by doubling down on his lies, trying to scare his audience into voting for Joe Biden: "[Trump will] send secret police to American cities to abduct protesters he and his right-wing allies couldn't care less about you they just want power if we leave these people in charge of our democracy any longer - It will disappear."

There are dozens of videos online of local journalists who aren’t beholden to the far-left, that actually show the nightly violence from Antifa, whether they’re setting federal buildings on fire or pelting officers with projectiles and even blinding some officers. But just like many DNC propagandists in the media, Meyers hopes that you will just take his word for it and he doesn’t have to actually provide any evidence or proof to back up what he’s saying.

This fake news garbage was brought to you by Dove and Allstate.