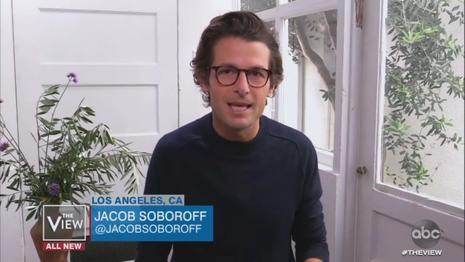 MSNBC correspondent Jacob Soboroff was given another opportunity Wednesday to promote his book bashing the Trump administration's border policy called Separated: Inside an American Tragedy, this time on ABC’s The View.

After the hosts trashed Trump for countering the media’s claim that more blacks are killed by police than whites, they brought on the MSNBC reporter to continue harping about how racist and cruel the president and his administration are for enforcing immigration laws.

Soboroff’s book centered on attacking the Trump administration for separating adults and minors that cross the border illegally. Co-host Whoopi Goldberg began by asking Soboroff to describe what he saw in one detention center. She gushed, “When you went in, did this look like something you would ever see in the U.S., or did it look like we were in some other country altogether?”

The MSNBC reporter recalled in horror how seeing kids in these centers away from their parents “made [him] sick” and it was anti-American so he had to write a book detailing his experience:

No. It looked like the U.S. would go and stop from happening in another nation and I'll never forget it as long as I live... It makes me sick every time I talk about it to this day. That's why I wanted to write the book. I saw all this in real time with my own eyes.

The show hosts, nor Soboroff mentioned it was the Obama administration which built the “cages” in these detention centers where children were detained away from adults. Why didn’t Soboroff want to visit these centers or write his “American tragedy” book then?

Co-host Joy Behar then invited Soboroff to push his hyperbolic claim that the Trump administration was responsible for “torturing” and traumatizing immigrant children:

JOY BEHAR: I certainly hope that Trump supporters will read your book. So experts have gone so far as to call what happened to these migrant children, “torture,” but you believe what's happening now at the border is actually worse. Tell us what you think about that.

JACOB SOBOROFF: Yeah. You're right, Joy, and I'll say about that it's not my words. It's the American academy of pediatrics, it's Physicians for Human Rights, a Nobel peace prize winning organization that characterizes what the Trump administration did as a systematic campaign of torture of 5400 children under the guise of an immigration policy, and these children will be left with lifelong trauma for the rest of their lives. 5,400, and today this is still going on.

Co-host Sunny Hostin then prompted Soboroff to attack former DHS spokeswoman Katie Miller for allegedly sharing her “shocking” belief that immigrants to this country should assimilate. Soboroff was aghast at this notion and suggested it was racist. He bragged how he called Miller a “white nationalist” for saying that:

HOSTIN: What went through your mind when you heard that? Was that the mindset behind this entire policy in a nutshell?

SOBOROFF: I think so. I mean, honestly, Sunny, my immediate reaction was, I said to her, are you a white nationalist? I was there with my colleague and my trend, Katy Tur who sat up in her chair because I asked that to her, and that’s when she said the comment about, ‘no. you should assimilate, and why do we have little Havanas?’ It's almost like saying the quiet part out loud, and when she said that to me, it was so shocking, but it instantly made it so clear to me that that's where this was coming from within this administration. Despite the best efforts of people who care about the humanity of the children, and that's what this is about. It doesn't matter what political party you're in. Who cared about the fact or what these parents even did. The fact these children were being traumatized for life, and that's the reaction? It said to me, in a nutshell that's where this is coming from.

Behar agreed. “Right. They should all be ashamed of themselves,” she sneered.

It’s laughable that the MSNBC reporter claims he isn’t being political by putting out an anti-Trump book during an election year, not to mention his suggestion that believing in a country’s right to protect its border and enforce its laws means that you’re a racist.

The View was brought to you by Dove and Swiffer.