'View' to Jill Biden: How Will Joe 'Heal Our Country,' If He Can Keep Trump From 'Stealing Election?' 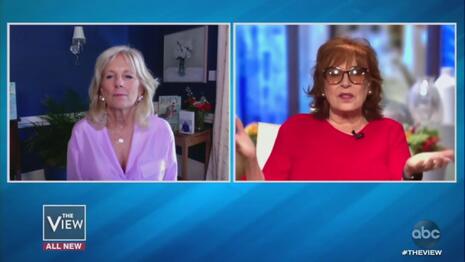 After the networks gave Jill Biden interviews this morning to promote her husband’s campaign through a children's book, Biden went to ABC’s The View to do more campaigning for the Democrat presidential candidate while he continues to hide in the basement. Like other interviews on the show with Biden surrogates, she was thrown mostly softballs like “How will Biden heal our country?” and “Can you remind people what the soul of America really means?”

Co-host Joy Behar started off by rehashing Democrat conspiracies that President Trump is going to cheat and steal the election. She fretted:

His supporters will show up at the polls no matter what disease they're going to get. He has other tricks up his sleeve, potential help from Putin. Maybe a little smattering of voter suppression. Now your husband, our beloved Joe Biden, he said his biggest fear is that Trump would find a way to steal the election. I'm afraid of that also. I'm very scared. Tell me what Joe and the Democrats are going to do about that. We don’t have that much time left!

Co-host Sunny Hostin noted the Obamas “were subjected” to a lot of racist “vitriol” before bringing up the George Floyd protests. She suggested Biden can fix race relations: “How does Joe Biden plan to heal our country?”

Along those same lines, co-host Meghan McCain later complained about mean President Trump. She asked Biden how her husband would deal with “disgusting” Trump:

“President Trump is disgusting...I don’t want to repeat [the names he’s called your husband] because it’s so gross” she whined adding, “How are you guys preparing to go up against that in the debates and in the general election and just to deal with the inevitable vitriol that's coming?”

After boasting he was used to bullies, Joy Behar praised, “Yeah. I think he can handle it just fine.” She then seemed to attack the media (?) for supposedly highlighting Biden’s near daily gaffes:

They go after him for his little gaffes that he makes. I mean He's human. He makes mistakes. It's not like this criminal in the White House and the things that he says every day. I wish they would just stop doing that. Why do you suppose Trump is so teflon? Why do you think?

Biden sighed that she “didn’t understand either” why Trump was “not held accountable.” What world are these two living in?

Getting to her children’s book, which is just campaign propaganda about Biden, Whoopi Goldberg also asked her to “remind” Americans what the soul of America is:

Jill, you wrote an amazing new children's book about your husband's life called "Joey," which we're going to talk about more in a few minutes. You write about restoring the soul of America. Can you remind people who may have forgotten what the soul of America actually means?

As if she wasn’t thrown enough softballs, the hosts ended the show by letting Jill make one more pitch for Joe: “What do you want people to know about Joe in a sort of a nutshell?”

The hosts did ask some neutral and semi-critical questions throughout the interview, such as how will Biden counter Trump’s silent majority, how do you respond to critics who say Joe is hiding in the basement, and will you tell him to pick a black female VP?