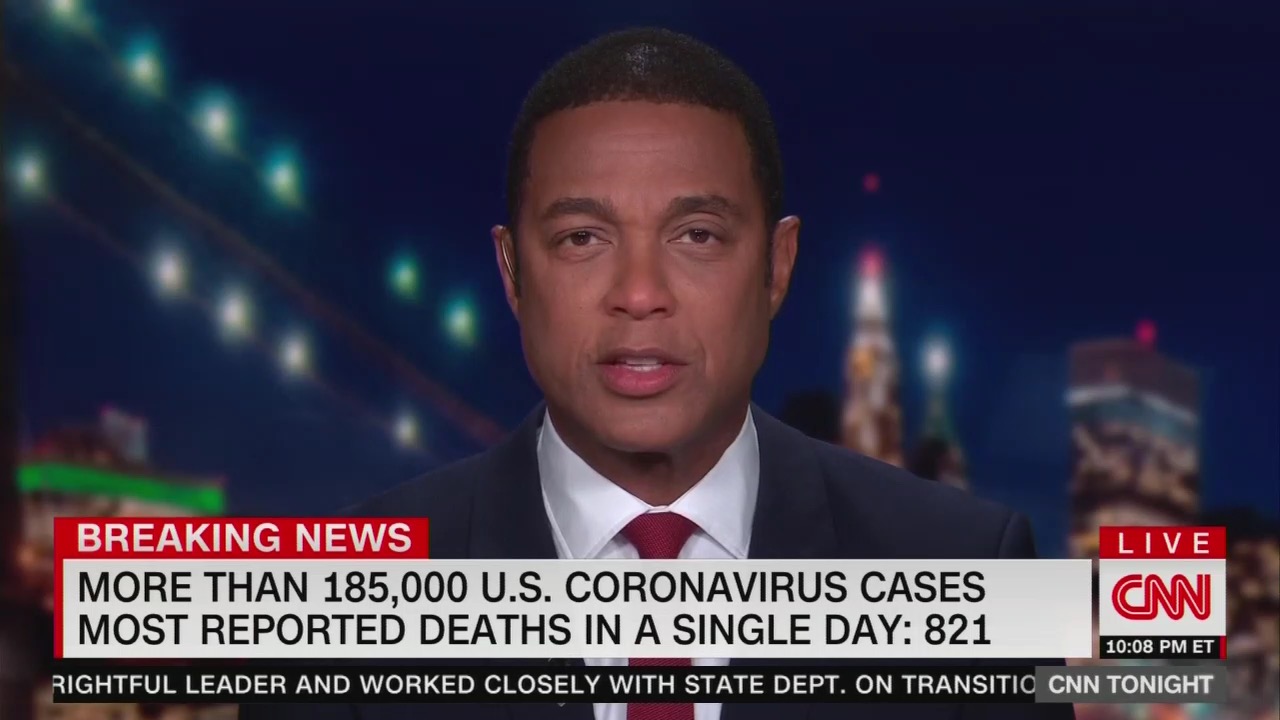 CNN host Don Lemon opened his Tuesday night show echoing the nasty sentiment of Nancy Pelosi, blaming President Trump for people dying from coronavirus. Lemon conveniently ignored criticizing Democrat leaders in Louisiana and New York for their missteps, while pinning all the blame on President Trump. Unable to stick to the facts, Lemon smeared the president with the debunked falsehood that he called the virus, a “hoax.”

Although Trump took a more somber tone during that day’s presser, Lemon couldn’t help but continue to bash Trump over his premature evaluations of the virus’s severity and spread, weeks ago, before it had spread rapidly in the United States. The host, whose network motto is #FactsFirst, pathetically mixed fact with fiction in his desperate attempt to blame the president for this health emergency:


Gee, who would ever have thought that we could just ride this out? Does he think that we've all forgotten that he called the coronavirus a hoax? Does he think that we have forgotten what he said -- that he said that it would disappear like a miracle, that his administration insisted that it was contained, mocked people who said otherwise, urged Americans to buy stock. He said 15 cases would go down to zero in a couple of days. That's all the truth. That's all on tape. Where did people get the false and dangerous idea that this was like the flu? There it is, maybe from the president, who tweeted just a few weeks ago comparing the number of people who die from the flu to deaths from coronavirus.

Funny, Lemon forgot to call out his CNN colleague Anderson Cooper, who also compared COVID-19 to the flu. But apparently, Trump was the only one doing this. Lemon continued spewing venom:

Tonight he [Trump] also took credit for what he calls the biggest decision he made, shutting down travel from China…. Some people are fact averse, but we like the facts on this show. So here's the fact to that because you've been hearing that a lot from the president a lot, okay? Everybody listen. Here's the fact. The president didn't shut down travel from China. All right? Listen. He made exceptions for immediate family members of American citizens and permanent residents and American citizens themselves were free to go back and forth….We need honesty and we need credibility and we need it now. Two things this president has squandered away over the last three years.

Lemon is one to talk for honesty and credibility. A few weeks ago, he spread fear and anti-Christian bigotry claiming that Vice President Mike Pence would allow people to die by praying and ignoring science. As for “honesty and credibility,” the latest poll from Gallup shows that the American people view the media as more dishonest than the president on this virus.

After this rant, Lemon invited White House correspondent Kaitlan Collins to back up his attacks against the president, which she happily did. Proving again that the self-important media think it’s more important to hold grudges and point fingers than actually help people with useful information, Collins complained, “Yeah, his somber tone today doesn't erase what the president has said in the past.”