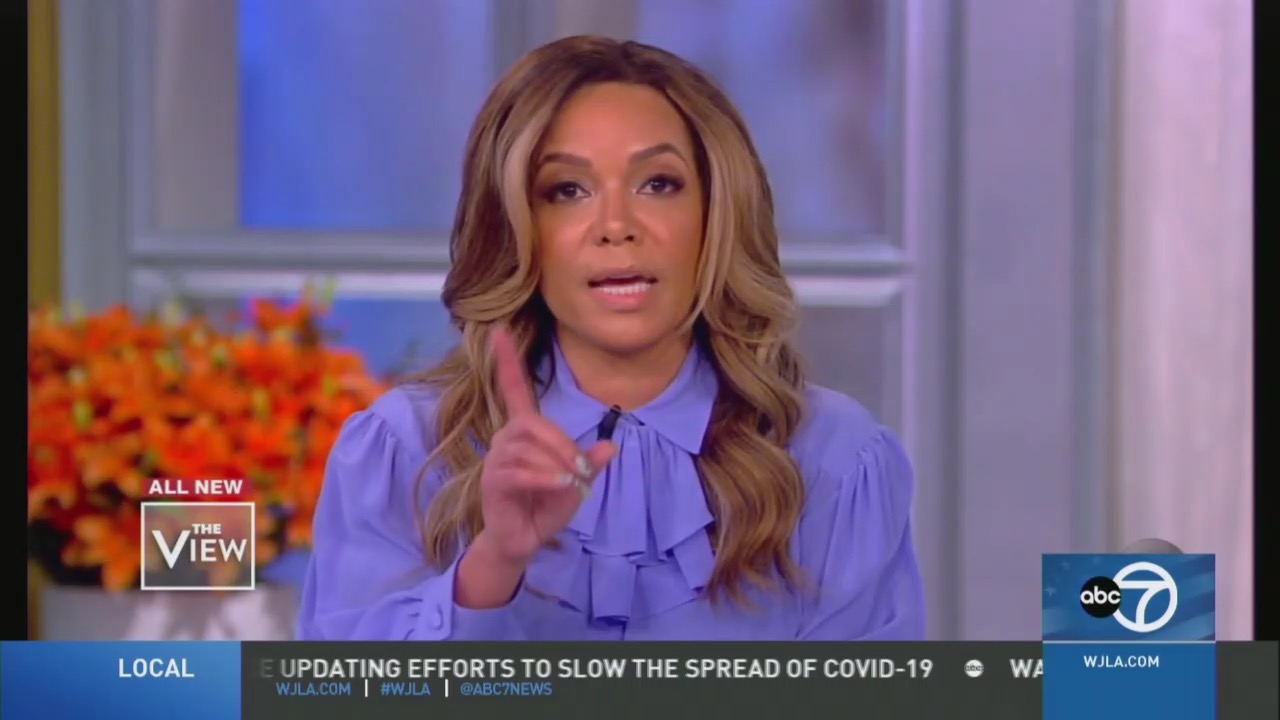 The media has forgotten about impeachment and put renewed efforts into pinning the coronavirus on President Trump. That was evident on The View Friday, as co-host Sunny Hostin peddled a debunked lie about President Trump while she, and her co-host Meghan McCain whined about how conservatives only get their news from Fox News and President Trump.

Co-host Whoopi Goldberg began by snarking that President Trump had “changed his narrative” on the virus by “admitting the severity of it” during yesterday’s press conference. She immediately made it political, questioning if this “changed narrative” was going to affect his re-election chances:

"People are saying, well, it's a while to November. Let's see what's going on because when you change the narrative, you know, as he has many times, it makes people uncomfortable. Are y'all comfortable with this new narrative?" she posed to her co-hosts.

Former co-host Sara Haines, filling in for Joy Behar, avoided commenting on the politics of the matter and urged people to listen to medical professionals and scientists instead and do their own research. But co-hosts Sunny Hostin and Meghan McCain were more interested in attacking Trump and right-wing media.

“Let’s not forget, this president said not too long ago this was a democratic hoax! That Democrats--that coronavirus was a hoax,” Sunny Hostin gushed.

She added,” Is this a hoax? Are people dying from a hoax?”

Meghan McCain agreed this was going to hurt Trump in the election. “That verbiage is going to be run in attack ads, come November,” she touted.

McCain went on to lament how “unfortunate” it was that many older conservatives *only* get their information from Fox News, who had echoed Trump’s hoax comments.

“It is unbelievable when you saw some of the anchors on Fox News calling it a hoax, calling it all this stuff and the change!” she said, name-dropping Sean Hannity as one of the people guilty of this.

McCain acknowledged the public’s distrust of the media, while avoiding putting any blame on the media for this rift:

“I just think that unfortunately a bunch of people in this country who have such a distrust of our media and our institutions that they choose to only listen to one network or another, and I think it has done a real disservice,” she stated.

“And they listened to the president who called it a hoax and their lives were at stake,” Hostin reiterated before cutting to break.

As usual, the media has no problems slicing and dicing people’s words to fit their own narrative.

Trump did not call the virus a hoax, that has been debunked but still some in the media continue to spread that lie.

The View continued attacking Fox News in the next segment. They played that aforementioned video montage of a few Fox News hosts striking a more serious tone towards the virus this past week. Notably, no one actually called it a “hoax” in the “before” clips.

It wasn’t just The View, who decided it was a good time to attack Fox News’s coverage of the virus; Brian Williams also attacked the network with his own selective edits on MSNBC, Thursday.