CNN Spins Biden Lying, Cursing Out Voter: ‘Some People See That as Charming’ 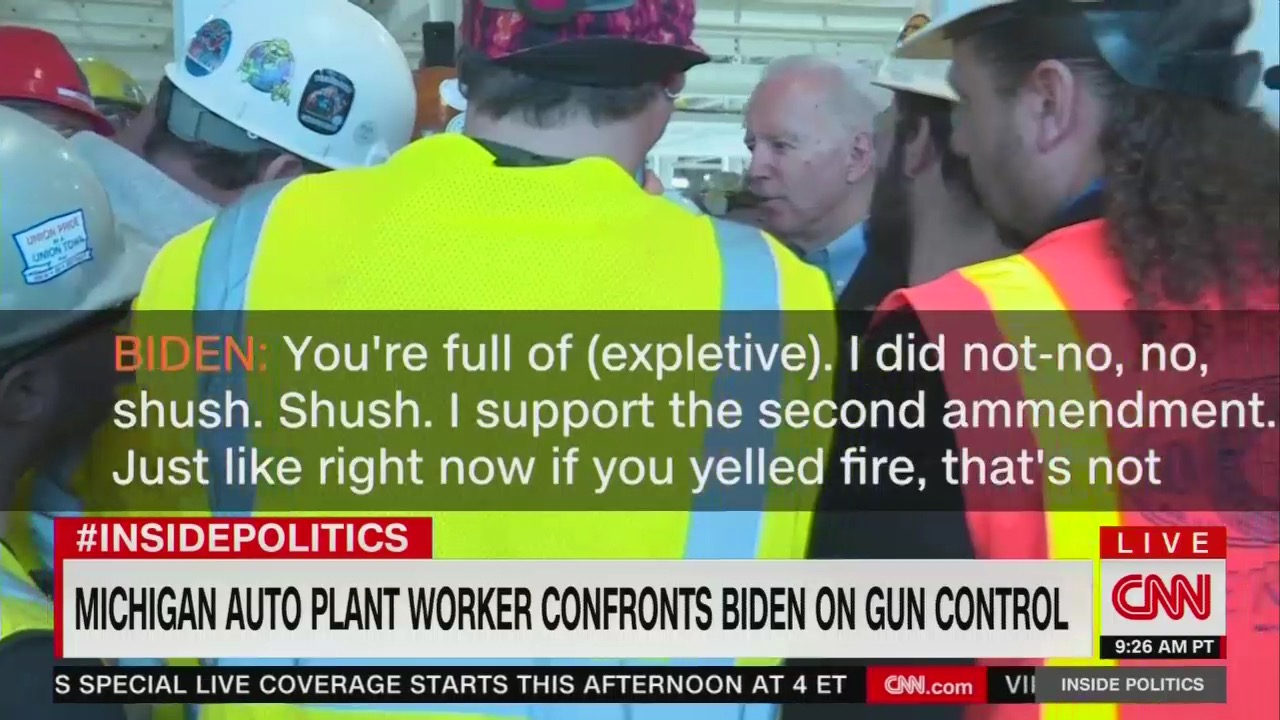 How many gaffes and hostile interactions with voters does 2020 Democrat frontrunner Joe Biden have to make before the media notices or cares? On Tuesday morning Biden was caught in yet another uncomfortable moment, cursing and lying to a man who confronted him during a campaign stop over his stance on guns. Instead of ignoring the incident as they typically do, CNN decided to cover for Biden by spinning it positively and refraining from fact-checking.

On CNN’s midday show Inside Politics, host John King previewed the clip by speaking in condescending terms about the autoworker who confronted Biden for siding with radical Beto O’Rourke on gun policy:

“This is why they have the term, ‘Reagan Democrats.’ You have, you know, white factory workers mostly white men who own guns, who think Democrats are going to take them away and Joe Biden today having one of those moments,” King stated before playing a clip of Biden calling that man a “horse’s a**” and saying he was “full of sh**” for saying Biden was trying to take away people’s guns. At the same time, Biden said he was going to take certain guns away.

After downplaying the interaction as Biden “defending his position on gun control” King seemed amused by the exchange and tried to spin Biden’s demeanor as “charming”:

“Some people see that as charming that a candidate is willing to air it out face-to-face with a guy on the floor. Some people say, Woah, you can choose different words, couldn’t you?”

Washington Post White House reporter Toluse Olorunnipa was also grinning over the exchange. He also tried to spin it as part of Biden’s winning personality:

“I think for his campaign they pushed it out and said this shows Biden's authenticity. The ‘no malarkey’ part of the Biden approach to politics. It is interesting to see these unscripted moments,” he began before adding that Biden was “very scripted” during his short stump speeches where he often makes “stumbles” that are seized on by his opponents.

As he veered into that negative territory, CNN commentator Jackie Kucinich immediately jumped in to cover for Biden. “Though I don’t think that hurts Joe Biden,” she said while shaking her head vehemently. “That shows him pushing back on an issue that is a significant issue,” she gushed.

The rest of the panel continued to defend Biden instead of fact-check him as they went to break. “Probably not a Biden voter there, any way,” senior White House correspondent Jeff Zeleny stated.

“Seriously,” Kucinich said dismissively. King also downplayed the incident. “Didn’t appear to be a Sanders or a Biden voter,” he agreed.

Just as the man who confronted Biden said, last week the 2020 presidential candidate called Beto O’Rourke up to stage at a Texas campaign stop and vowed to make Beto's gun-grabbing plans happen, as you can see in the video below:

“You’re going to take care of the gun problem with me...the country needs you,” Biden gushed to Beto.