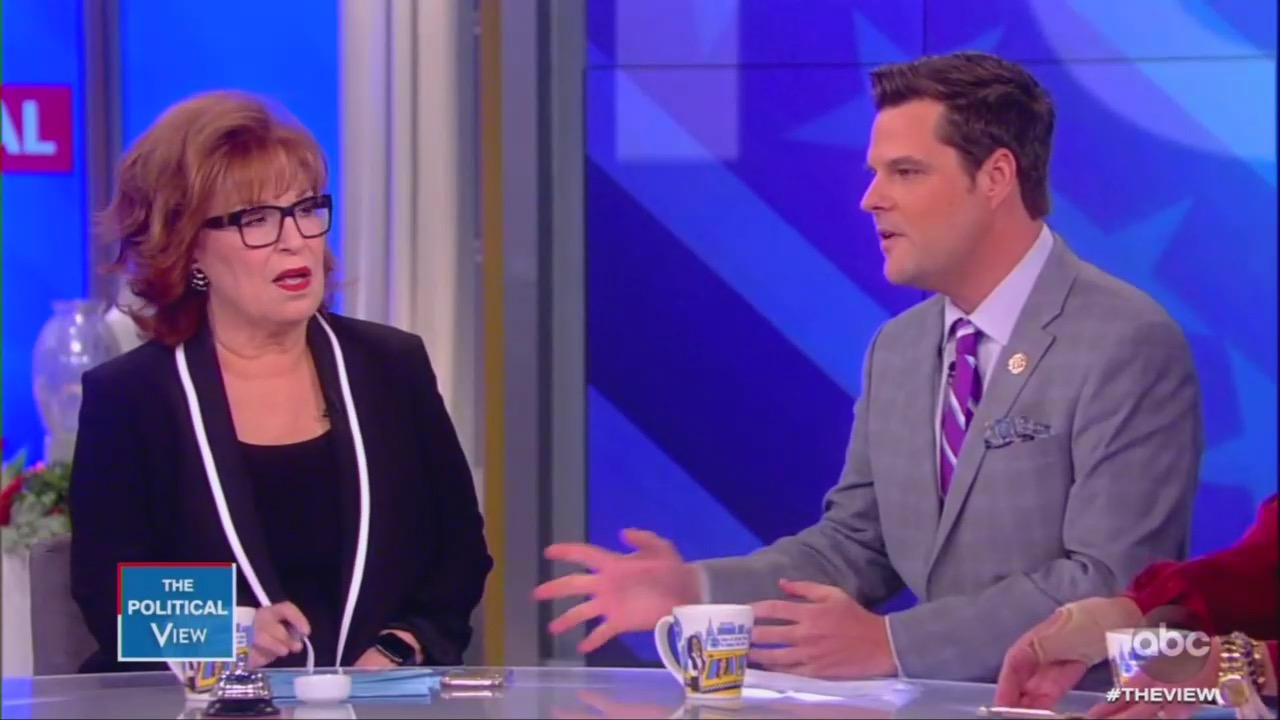 Rep. Matt Gaetz (R-FL) appeared on The View Thursday to get the usual disdainful treatment that every Republican guest gets on the liberal talk show. It wasn’t the questions he was asked, but more so the rude outbursts, interruptions and snarky comments that came at every turn in the brief interview that displayed the hosts’ contempt for Trump supporters.

Co-host Joy Behar began the interview by snarking that Gaetz supported the president so he “obviously never watched The View.” Gaetz gleefully teased the hosts over the Democrats’ killing each other during last night’s debate. After fellow co-host Sunny Hostin asked who he thought could beat Trump, Gaetz stated none of them could and began to tout the economy. At that point, Behar lost it.

“Are you doing a stump speech now?” she snarked. From there, she ranted that it wasn’t “smart” of his “boss” to appoint a “yes man,” Richard Grenell, as acting director of national intelligence. Gaetz argued that Trump surrounds himself with people who disagree with him on policy all the time, and that Grenell was qualified from his time at the United Nations. But Behar wasn’t convinced, calling Grenell “thin-skinned,” which prompted this hilarious exchange:

BEHAR: Germany by the way, I was reading about him, they think he's very thin-skinned but that's another story.

GAETZ: Well I mean, this is The View, aren't we all?

Co-host Whoopi Goldberg then tried to interrupt, sounding like she was going to say something to Gaetz but then decided to let Hostin ask her question instead.

Even co-host Meghan McCain butt heads with their guest. After Gaetz affirmed that Roger Stone should be pardoned by President Trump, she yelled out, “Come on congressman! Come on! Come on! He’s the swampiest swamp creature!” (something that she says about just every associate of Trump.)

As he pointed to Clinton’s record of pardoning criminals and terrorists, Behar claimed Clinton “got plenty of flack for it” while wagging her finger at Gaetz. Hostin also suddenly cared about the ethics behind presidential pardons, saying, “Can we agree that perhaps that pardon power needs to be reviewed and curbed?”

While Gaetz was explaining the history behind why we have pardons, he referenced the British monarchy and the co-hosts jumped in to act offended, because they weren't listening to what he was saying.

“Did you just say the sovereign?!” Whoopi shouted. “Oh my god. So Trump is king?” Joy Behar moaned.

Whoopi apologized a moment later after catching up to the point he was making but Behar didn’t. “It sounds like you think Trump is the sovereign,” she quipped.

McCain then pressed Gaetz to convince her, and other Never Trump millennial conservative women, why she should vote for President Trump, when they have major issues with his “character.” As Gaetz was responding, the other hosts jumped in call out Trump for adultery, which Gaetz pointed out they “weren’t waving pom poms” when Bill Clinton was impeached for lying under oath about his affair.

“I don't know what that means,” Whoopi scoffed. “It means nothing,” Behar chuckled derisively.

The last kerfuffle came at the end when Gaetz mocked Bernie Sanders:

GAETZ: We've got a comeback president running against the throwback left in the Venezuela wing of the democratic party taking over in Bernie Sanders.

BEHAR: Come on, the Venezuela wing!