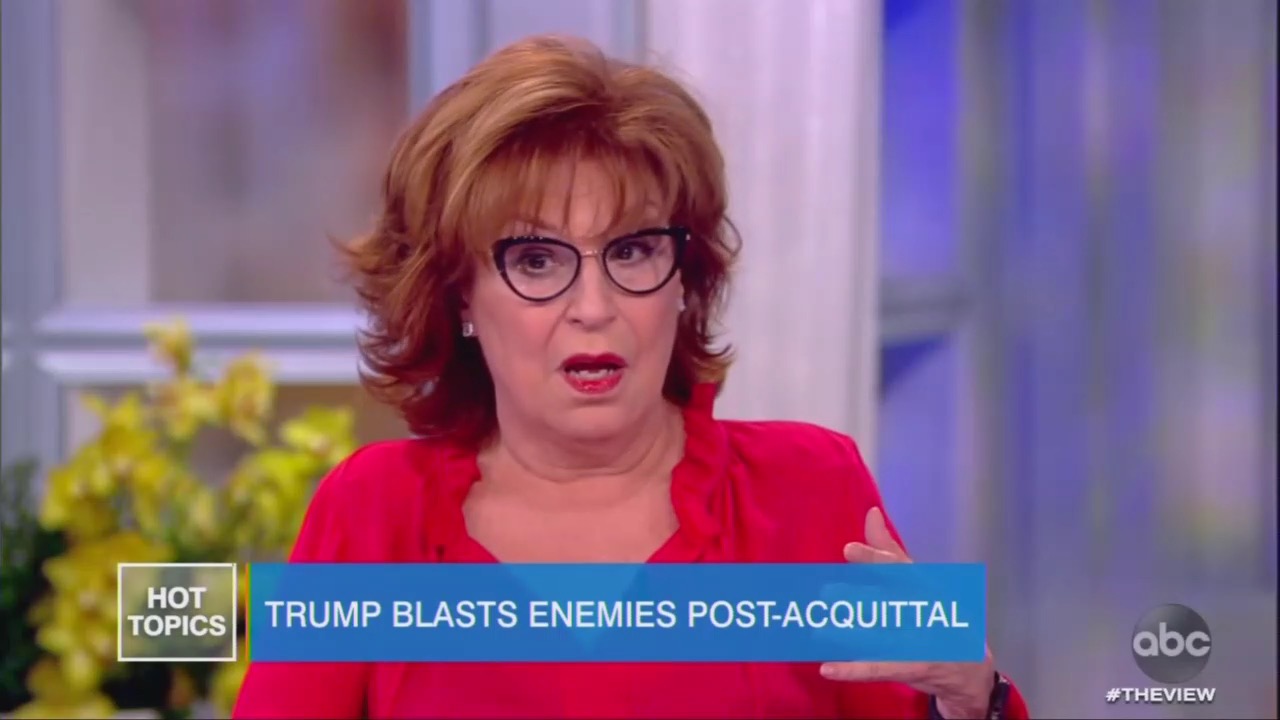 The View co-host Joy Behar had a mini meltdown on-air during Friday’s show, expressing her frustration over President Trump’s acquittal. Visibly rattled, she admitted she had been driven “crazy” by this administration and was getting “nuttier” by the day.

It all started when her co-host Meghan McCain wished her 108-year-old grandmother a happy birthday. McCain pointed out that having a sense of humor was the key to her longevity, so Behar should live for another “2000 years.” But Behar had lost her sense of humor.

“Not with this administration. I’m not going to make it,” she grumbled. Moving on, Behar trashed President Trump’s “impeachment revenge tour” at yesterday’s National Prayer Breakfast and afternoon press conference.

After playing the clip of Trump criticizing Mitt Romney, Behar sneered, "Acquittal doesn't mean you didn't commit a crime. Three words: O.J. Simpson!" After that she violently pulled out her earpiece in frustration and ranted, “I’m crazy today. He’s made me crazy this week. I mean, he’s winning because I’m getting nuttier and nuttier!”

As McCain tried to console her co-host, Behar assured her she was going to do self-therapy this weekend: “I’m not watching the news. I’m going to get a massage and drink, eat every carb in the house,” she said, chuckling.

Friday co-host Ana Navarro was just as rattled by Trump going after Romney, going on a long tirade about how un-Christian, “Impeached President Loco” was. She then mocked Republican senators at the press conference as Trump’s lap dogs:

“[S]urrounded by these Republicans that looked at him the way my five-pound poodle looks me when she wants a treat, you know? ‘Oh please say my name, say my name!’” she griped.

Behar added to the vitriol, saying,“These pathetic Republican group yesterday at that meeting, Mark Meadows, as you say, they're like little dogs over there!”

The meltdown continued as all three liberal hosts threw their hands up in the air yelling, “Oh my god,” after playing a clip of Trump criticizing the Bidens. Behar was so shocked she started raving about “President Bone Spurs,” and the network had to cut her audio for a second, assuming she was going to use profanity.

After her co-hosts were done ranting and raving, Meghan McCain admitted she didn’t want to say much because they were “very angry” and “scaring” her today.

Behar was still fuming after the break, saying she was “so upset” that she “couldn’t even say his [Trump’s] name anymore.”