'View' Hosts Lose It Over 'Racist' Limbaugh Getting Award: 'Supposed to Go to People Who Actually Did Stuff' 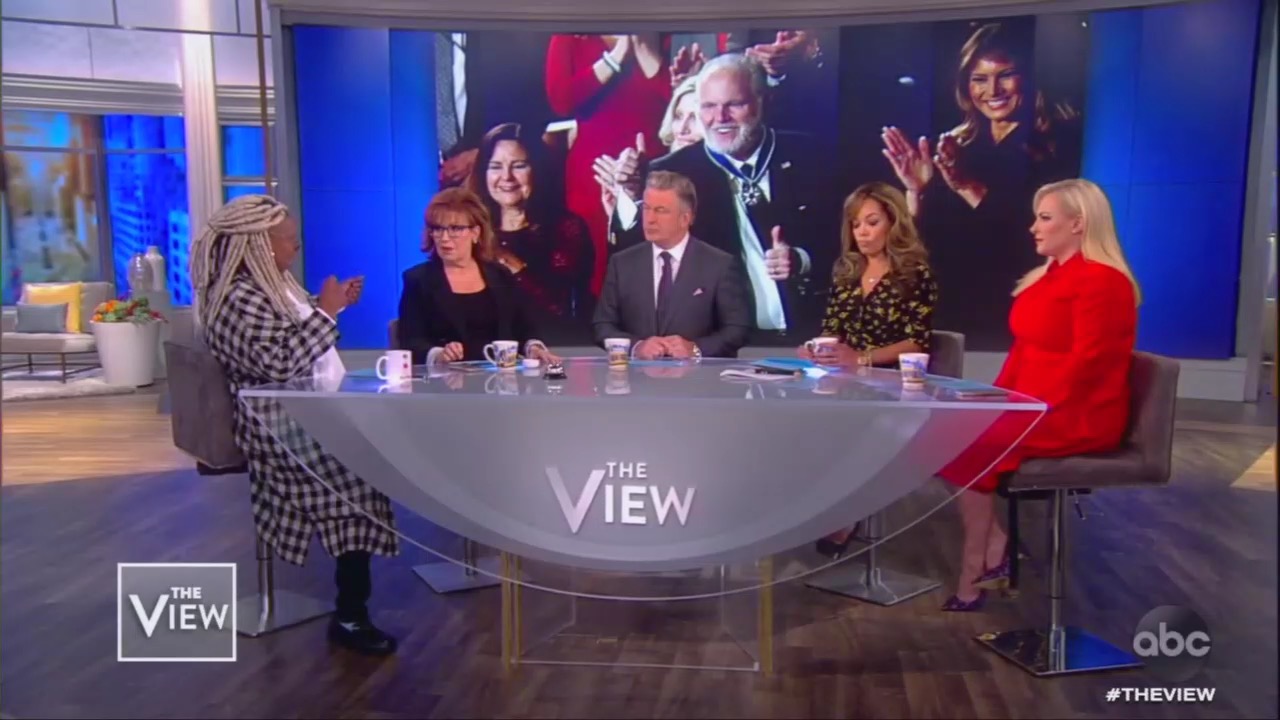 After praising Nancy Pelosi’s antics at last night’s State of the Union address, The View hosts reserved their rage for President Trump awarding Rush Limbaugh the Presidential Medal of Freedom Award. Co-host Whoopi Goldberg claimed the influential talk radio host had done nothing to deserve it, while co-hosts Joy Behar and Sunny Hostin attacked Limbaugh as a racist bigot.

Whoopi began the segment by snarking, “I’m sorry, but I thought the medal of honor, freedom, was supposed to go, to people who actually did stuff.” Behar backed up Whoopi’s diss of Limbaugh with, “Well it went to Mother Teresa and Rosa Parks.”

Funny that the hosts conveniently forget the history of this award, being given to several cultural icons, actors and comedians since the 1960s. President Obama, in fact, gave it to many lefty actors like Meryl Streep, Robert Redford and Tom Hanks, just to name a few. So Limbaugh receiving it is not unusual.

Yet Whoopi kept complaining. She suggested Trump give the award in honor of a political rival instead.

“How about if you give the Medal of Freedom to people have made differences in this country and done all kinds of stuff, how about giving it to Elijah Cummings’ wife? As a thank you for all his service?” she asked as the audience applauded.

Whoopi then argued with Meghan McCain over Limbaugh’s influence. As McCain pointed out his huge audience, Whoopi begged to know, “Yes, but what has he DONE?”

McCain answered simply, “Well, completely changed the paradigm of radio,” to which Whoopi rolled her eyes.

That’s when Behar and Hostin lost it, unfairly accusing Limbaugh of being a racist, like many in the media have already done:

BEHAR: There he is talking to the black community and gives Rush the medal, and Rush Limbaugh spent a lot of Obama's tenure singing -- what did he call it? 'Barack the magic Negro.' He's been so racist and so misogynistic over the years, to give him -- who's next? Roger Stone? How about giving it to him or Steve Bannon!

HOSTIN: I don't think it was lost on the black community that he gave that honor to Rush Limbaugh during black history month, sitting next to a Tuskegee airman on Rosa Parks' day while Rush Limbaugh was a long-time birther, during the Obama administration, played that magic Negro on his show several times. So, you know don't talk to me about what you've done for the black community!