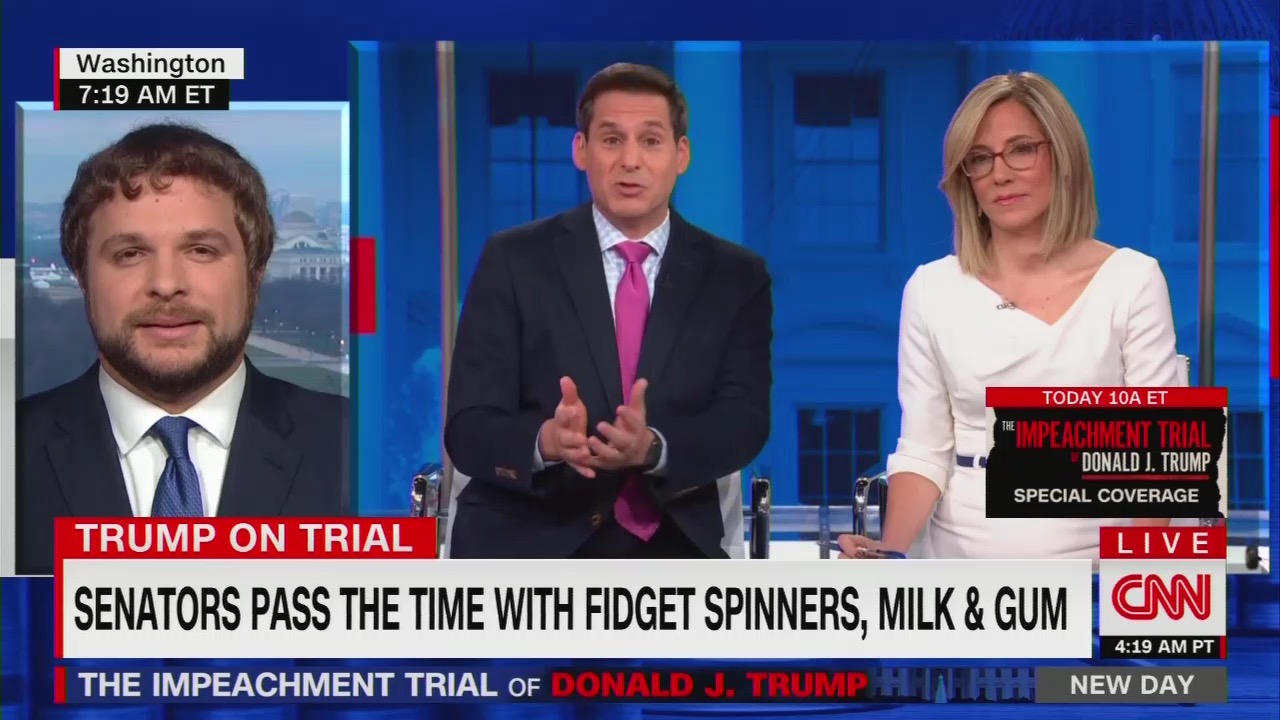 Friday morning on CNN’s New Day, co-anchors John Berman and Alisyn Camerota spent at least two segments attacking Republicans as high school children that weren't taking the Senate impeachment trial "seriously." The co-hosts even hyped how the Senators could be thrown “in the slammer” over their behavior.

In the 7am hour, CNN Politics reporter Jeremy Herb told the hosts how he gets a behind the scenes look at what goes on inside the Senate. Comparing the situation to a high school lecture, he noted how some members of Congress would walk around and even had fidget spinner toys. Co-host Alisyn Camerota wanted names. She demanded Herb, “spill the beans” on who was misbehaving:

“Who has been cutting class? We keep hearing that there are some people who are not in their seats. Are there any worse offenders than others?” she gushed.

Besides a brief mention of Dianne Feinstein, Herb only listed Republican Senators as the “worst offenders.” Berman was irate, touting how these Republicans should go to jail, specifically calling out Lindsey Graham:

30 of them would be in the slammer right now if John Roberts actually enforced the rule. Seriously. They're talking in the chamber. Period....They could be thrown behind bars by the rules of the Senate. Is Lindsey Graham okay? And I'm not even kidding here. Because he's walking out of the room all the time. He was out repeatedly yesterday, two days ago. And then yesterday, when he was actually --  his name was invoked and video was played of him, he wasn't in there!

Camerota dismissed the senators as acting like children. “There's a whole high school room analogy you can't help but draw here,” she snarked.

Berman scolded: “Except this is the trial of the President of the United States and these people have been elected to sit there and listen they're paid $175,000 to do it. That's the only difference between this and The Breakfast Club.”

In the next hour, the co-hosts continued bashing Republicans. Camerota spoke with Senator John Barrasso (R-WY) about his colleague Lindsey Graham, while taking shots at all the Republican Senators for not being enthralled by Democrats repeating the same arguments over and over again.

Camerota first reveled in Graham getting called out by Democrats for taking an opposing stance on witnesses during Clinton’s impeachment. Like her co-host, she touted the possibility of either Senator being “thrown in jail” for talking:

"And I also heard you say just on a lighter note, that you're afraid Senator Lindsey Graham is going to get you thrown in jail. And why is that?" she asked.

Barrasso joked about the situation but Camerota was trying to paint Republican senators as clowns. She pressed Barrasso that his colleagues weren’t taking impeachment “seriously:”

“That begs the question. Are people taking this seriously? Are your Republican colleagues who we see have the fidget spinners and all of that, do you sense that people are engaged enough?” she scolded.

I wonder if Camerota had the same questions when Nancy Pelosi was grinning while signing the articles of impeachment? Or if CNN will also go after Democrats on Saturday when they invariably display similar behavior during Trump’s lawyers' arguments?