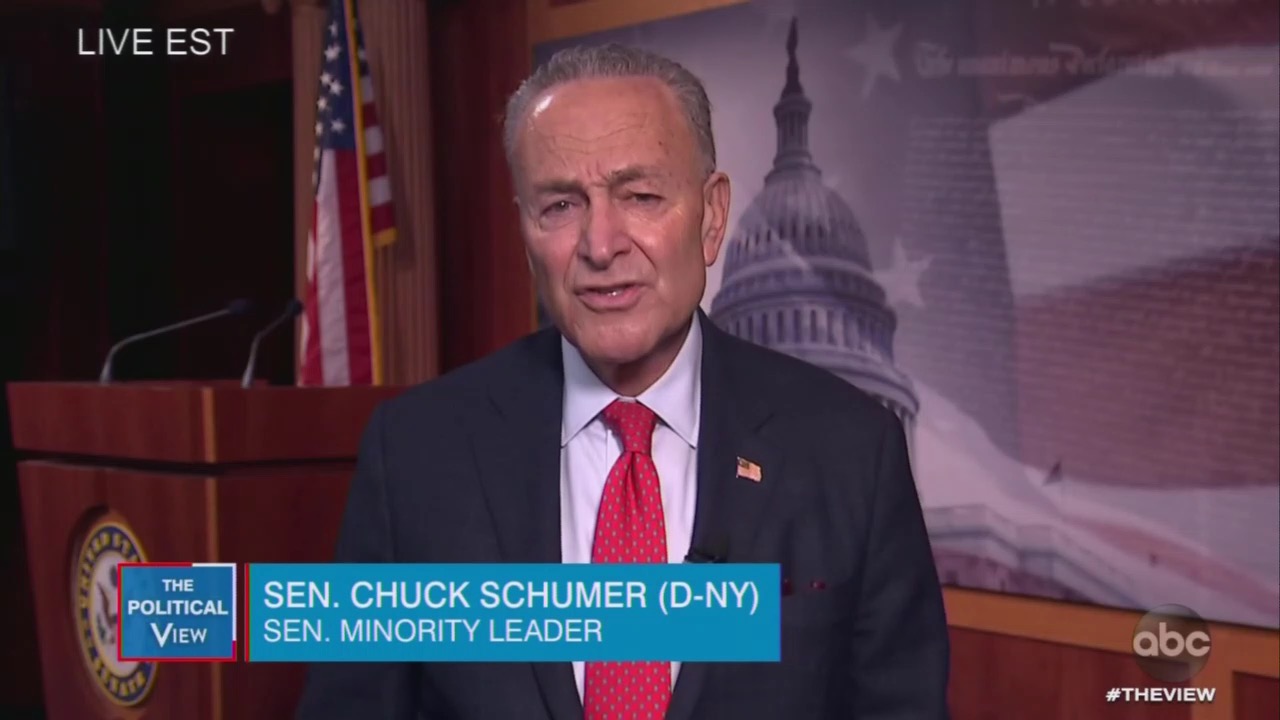 For two days in a row, The View has given Democrats in Congress a platform to bash President Trump over Iran and impeachment. Monday, House Intelligence Committee Chairman Adam Schiff was the satellite guest and today it was Senate Minority Leader Chuck Schumer’s turn to take softball questions from the liberal hosts.

Referencing a retweet from President Trump yesterday that disparaged Schumer and Nancy Pelosi as working for the Ayatollah, Goldberg feigned outrage before setting up Schumer to virtue signal about how bigoted and “dumb” Trump was:

SCHUMER: You bet, and he seems to like to appeal to bigotry and divisiveness instead of smart policy, bringing us together, keeping us safe.

Keeping up that theme, co-host Sunny Hostin then invited Schumer to say Trump lied about the Qasem Soleimani threat. She repeatedly invited the Democrat to contradict what the President said about an imminent attack from Iran:

HOSTIN: President Trump claims he ordered the killing of General Soleimani because he had been planning attacks on four U.S. embassies. You were in the classified briefing. Did you hear any intelligence about threats against four embassies?

SCHUMER...[I] am totally unconvinced that there was any imminence that required an immediate attack.

SCHUMER: I can tell you this, that even the Secretary of Defense walked that back. I have never heard anything to that effect.

HOSTIN: So is he lying to the American people?

Of course Schumer happily obliged with that prompt, bashing Trump “fast and loose with the truth” on most issues.

Schumer only faced one really critical question from co-host Meghan McCain. Both Goldberg and Schumer complained that a Senate trial would not be “fair” with Mitch McConnell admitting he wasn’t an “impartial juror.” McCain pointed out Schumer had the opposite taking during Bill Clinton’s impeachment trial:

"You have criticized the majority leader Mitch Mcconnell after he described himself as not an impartial juror, but during the impeachment trial of Clinton, you made statements on CNN. You said, quote, ‘this is not a criminal trial. It's not like a jury box. It's susceptible to the whims of politics, and not like a jury.’ Do you find that hypocritical?" she posed.

However, like Schiff, Schumer weaseled his way out of being held accountable for his hypocrisy, saying that the unheard from witnesses this time around made the two impeachment trials completely different.