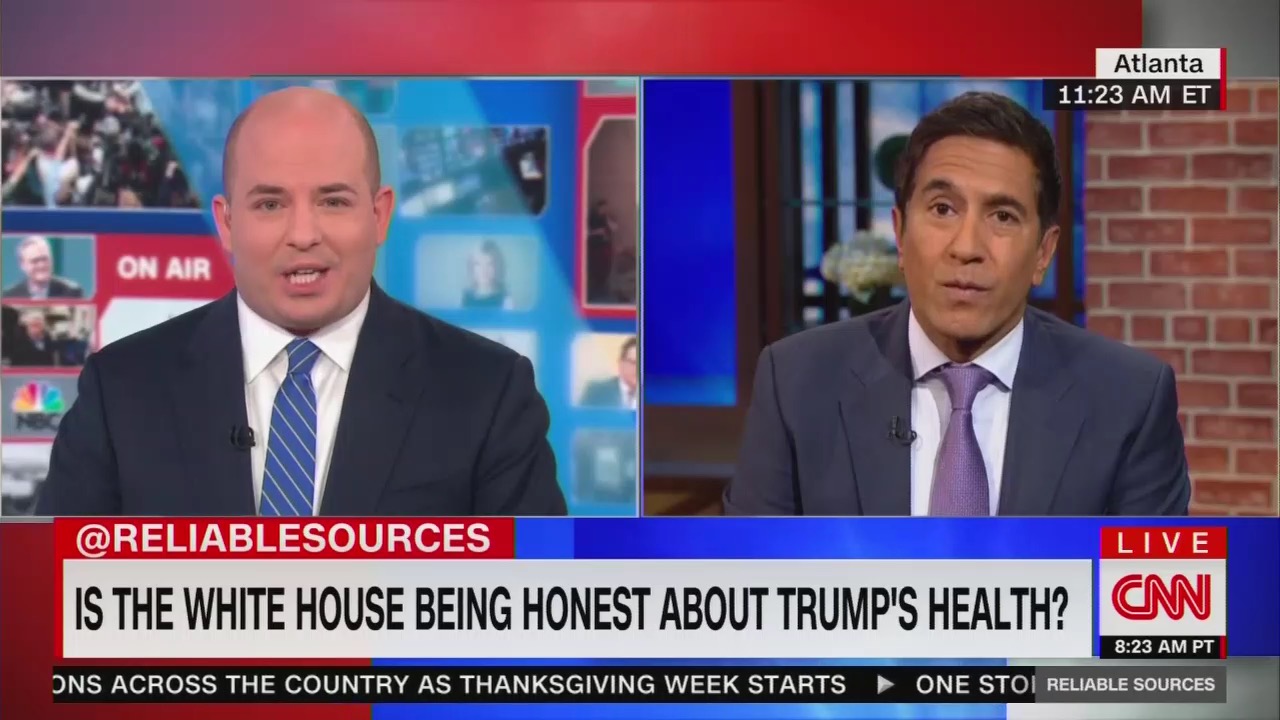 Tuesday night at a rally, President Trump blasted the media for spreading rumors about his health, specifically that he may have had a heart attack recently. CNN host Brian Stelter shot back at the President on Twitter, claiming he was “lying” and the media never did that. Perhaps Stelter should see a doctor for memory problems because he did this very thing just 3 days ago.

At a rally Trump railed against the media for suggesting he’d had a “massive, unbelievable heart attack.” Reliable Sources host Brian Stelter took to Twitter to deny this accusation before sneering at the President’s “strange lie:” 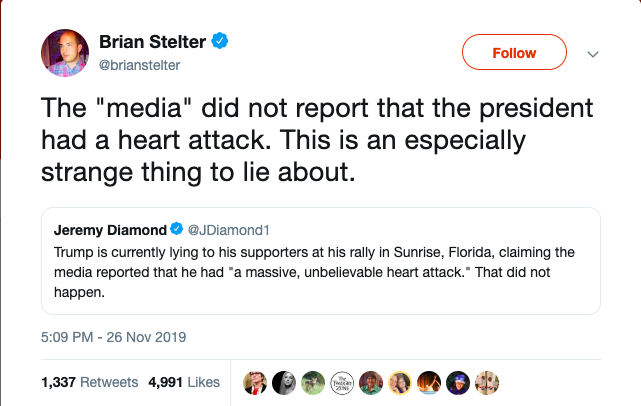 Stelter was replying to another CNN reporter, Jeremy Diamond, who also acted affronted at this “lie:”


Trump is currently lying to his supporters at his rally in Sunrise, Florida, claiming the media reported that he had "a massive, unbelievable heart attack." That did not happen.

However the media DID run conspiracy theories about the President’s health recently, gossipping he may have had a heart attack, without any proof or reason to. Brian Stelter himself did two segments on this very topic! Here's one from November 24:

Here are @brianstelter and @drsanjaygupta (just last weekend) doing the exact thing the former claimed the President was lying about: speculating he had a heart attack. Stelter also argued that the media have no choice but to treat the President this way. pic.twitter.com/fNXw7KgPll

Compared to in 2016 when Stelter warned the media, "Do Not Give Oxygen To "Conspiracy Theories" That Hillary Clinton Is "Secretly Ill," despite her strange medical episode being caught on tape. On CNN, Stelter blamed attention on Clinton's health as sexist.

Here’s a mashup the Trump War Room put out that shows how many times CNN reported Trump had heart problems:

This is an especially strange thing to lie about, @brianstelter https://t.co/ztAN8aKREi pic.twitter.com/l3meClo6vP

That wasn’t all. Here are a few more instances of the network speculating about Trump’s heart health (not even all of them):

-On November 19 New Day, Gupta told the hosts: “They don't talk about the status of his heart overall, which is obviously important because we know that he has a form of heart disease.”

Alisyn Camerota responded, "You know, that the American president didn't have a heart attack it sounds like, but you're not all in on believing that." Gupta went on to claim it “didn’t add up” and from his conversation with doctors in 2018, Trump was at "moderate risk of having a heart attack" "within the next 3-5 years."

-On November 20, CNN played a clip of Gupta grilling the WH doctor about if Trump had heart disease, in 2018.

There were multiple other reports on Nov. 17, 18 and 19 on CNN as well. It wasn’t just CNN either. ABC and NBC also ran reports suggesting Trump had heart problems last week, which we highlighted on NewsBusters.