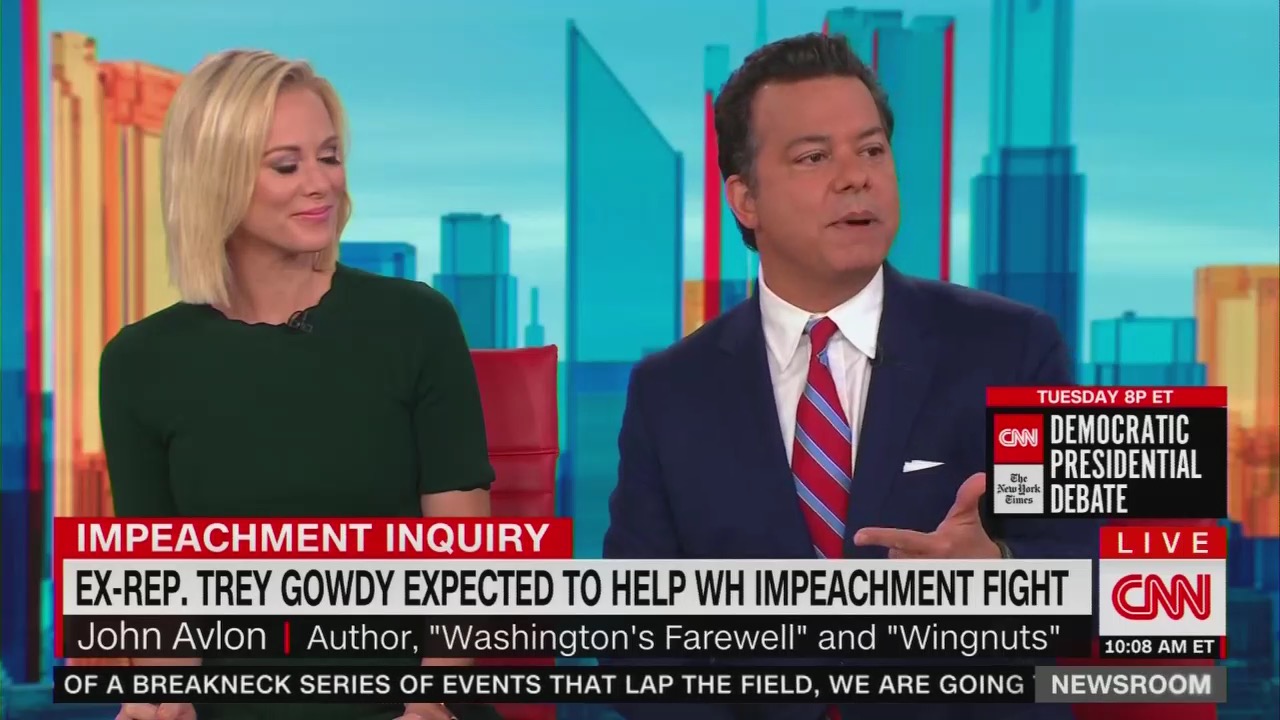 The 2012 Benghazi attacks are suddenly a topic of interest for CNN on Wednesday morning, but only as a tool to criticize Republicans. Smug CNN Newsroom hosts Poppy Harlow and Jim Sciutto eagerly showcased a clip of former Rep. Trey Gowdy slamming Democrats for withholding information from the Republican led-committee, equating it to what Trump’s administration is doing now with the impeachment inquiry.

But the clip CNN used was from June 2012, months before the attacks in Benghazi even occurred. The former representative was blasting the Obama administration for stonewalling an investigation into the Fast and Furious scandal.

Regardless, Harlow smirked, asking senior political analyst John Avlon, “So Avlon, when he is asked, ‘Mr. Gowdy, where is the respect for the rule of law?’ What does he say?” (Since Gowdy, now out of office, has joined President Trump’s legal team, the CNN hosts were eager to label this as hypocrisy.)

Avlon crudely dismissed the Benghazi hearings, that were based on the Obama administration’s controversial handling of the terrorist attack on our consulate which killed 4 Americans, as not “serious” like what the Democrats had against Trump:

I would love for Trey Gowdy to be consistent on this. I'd love to see philosophical consistency in Congress rather than situational ethics. But you know the problem is he didn't need to shout it, and be it, we don't expect it. Because everyone is sort of knee deep in hypocrisy on this stuff. The problem is it is the Constitution at stake. This is not a Benghazi type hearing, this is really serious stuff. "

Here is a quick reminder of how CNN covered the attack and subsequent hearings at the time. In 2013, CNN’s legal analyst Jeffrey Toobin scoffed at Republicans seeking out more information, calling the terrorist attacks a “non-story” and non-”scandal” for the Obama administration.

CNN’s David Gergen blamed Republicans for the media’s lack of interest in an investigation.

In mid-2014 CNN President Jeff Zucker bragged the Benghazi hearings weren't worth Americans' or CNN's time: "We're not going to be shamed into it by others who have political beliefs that want to try to have temper tantrums to shame other news organizations into covering something."

Two weeks ago, Avlon also attacked Republicans for their “situational ethics,” a problem cable news analysts seem to conveniently ignore when it comes to Democrats.