Stephanopoulos Coaches Pelosi on How to Make Impeachment 'Airtight' 'Inevitable' 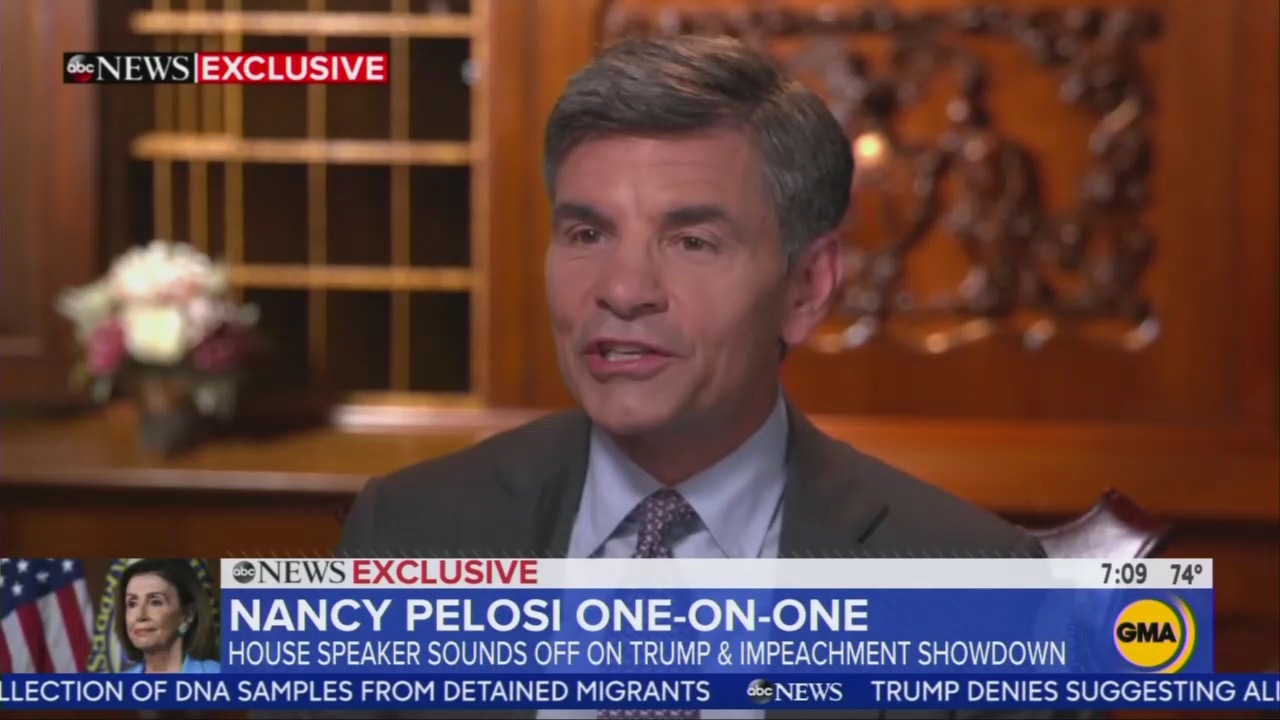 ABC’s George Stephanopoulos touted his exclusive interview with Nancy Pelosi on Thursday’s Good Morning America, which was largely friendly to the Democrat House Speaker. In the lengthy aired interview, Stephanopoulos pushed Pelosi to make her impeachment case “more airtight” and eagerly wondered if impeachment “was inevitable.”

“She is leading the battle for the House Democrats, she's all in,” Stephanopoulos praised Pelosi to start the segment. After asking about Trump’s criticism of her, she snarked that Trump was just “scared,” which led Stephanopoulos to gush, “Did you hear the fear in his voice when you spoke with him on the phone last week?”

What’s more, he urged Pelosi to make their impeachment case “more airtight,” repeatedly giving the Democrat suggestions of how they could guarantee Trump was removed from office:

In both the Nixon and Clinton cases the House passed a formal resolution to set up the inquiry. Why not take that step?

Wouldn't that make the process even more airtight?

There is no explicit quid pro quo in the call. Is that necessary for impeachment?

...
Is an impeachment vote inevitable in the House?

Stephanopoulos did push back once against Pelosi outright lying about Adam Schiff lying during last week’s hearing. However, he didn’t keep pressing, as he would had she been a Republican:

STEPHANOPOULOS: I know you support Chairman Schiff but was it right for him to have that dramatic interpretation of the President's transcript of the phone call at the hearing last week?

PELOSI: I want the American people to know what that phone call was about. I want them to hear, it. So yeah it's fair, it's sad but its using the President's own words.

PELOSI: He did not make it up.

ABC aired more of the interview in the second hour of GMA. Stephanopoulos was more critical during this segment, asking her if impeachment led by only Democrats was “good for the country.”

He also asked if Democrats were concerned that they were helping the President’s reelection campaign, if impeachment goes forward and he was acquitted in the Senate: “If impeachment helped President Trump win in 2020 would it be worth it?” he asked.

GEORGE STEPHANOPOULOS: She is leading the battle for the House Democrats, she's all in and sat down as the president was unleashing that series of attacks on her from the White house. Madam Speaker, thank you for doing this. It may not surprise you that the President was watching your press conference and heard you talk about wanting to do prescription drugs and wanting to do the U.S./Mexico/Canada agreement. now he's calling you the do nothing Democrats.

NANCY PELOSI: Why can’t we do it? It's up to him. That was our pledge during the campaign for the people. We would lower the costs of prescription drugs. I think the President wants to do that so I hope that he would cooperate. He does want the U.S./Mexico/Canada Free Trade Agreement. So do we. We are on a path to yes. I think the President knows the argument that can be made against him and he’s scared and trying to divert attention from that to we’re standing in the way of legislation. --

STEPHANOPOULOS: You say he's scared. He had another tweet right after the one I just talked to you about and he used a word I'm not going to repeat right here. Did you hear the fear in his voice when you spoke with him on the phone last week?

again, he confirmed that is what the conversation was as had been reported in the public domain and that when I actually saw it in writing I'd be so pleased.

STEPHANOPOULOS: The suspension he gave was days before the call. One of the things you've heard from some of the President's defenders is, There is no explicit quid pro quo in the call. Is that necessary for impeachment?

PELOSI: No, it's not necessary for impeachment but second of all but there is a quid pro quo if you're only a couple of days apart and granting or withholding and then asking for a favor to create dirt on your political opponent. The President did engage in using the leverage of our national security, legislation that was passed by the House and the Senate in the interest of our national security to give military assistance to Ukraine.

STEPHANOPOULOS: In both the Nixon and Clinton cases the House passed a formal resolution to set up the inquiry. Why not take that step?

PELOSI: We could but we don't have to. But we could. You know who is most afraid of that vote coming out? the Republicans because they'll have to decide.

STEPHANOPOULOS: Wouldn't that make the process even more airtight?

STEPHANOPOULOS: I know you support Chairman Schiff but was it right for him to have that dramatic interpretation of the President's transcript of the phone call at the hearing last week?

PELOSI: I want the American people to know what that phone call was about. I want them to hear, it. So yeah it's fair, it's sad but its using the President's own words.

PELOSI: He did not make it up. Look, I want to tell you something, when I took the oath of office to support and defend the constitution as my colleagues have done as well, I did not say I will do this as long as the Republicans can understand the Constitution. So the fact that their loyalty is to Trump and not the Constitution is not going to slow down or impair our ability to keep the Republic.

STEPHANOPOULOS: So has this passed the point of no return? Is an impeachment vote inevitable in the House?

STEPHANOPOULOS: One of the things you can see there is how determined she is to go forward…

STEPHANOPOULOS: I sat down with her in her ceremonial office yesterday. Of course this impeachment inquiry has moved at warp speed since she decided to launch it last week. She has been reluctant for some time. One of things I asked her about her concern about how it’s going to affect next year's election.

You were so clearly reluctant to take that step earlier all through the Mueller inquiry with the two conditions, you'd want to have Republicans on board and the public on board. If this is -- ends up being a party line impeachment, is that something that is good for the country?

PELOSI: Let me just say this, I never said it would be required that we had -- I just hoped that they would follow the facts and see the truth. We don't have a choice. We'll either support and defend the Constitution of the United States or we won't. And that's where we are. I think my holding back on it only argues further for how drastic this change was with this additional set of facts.

STEPHANOPOULOS: You've said you -- you feel you had no choice with going forward on the impeachment inquiry and I know no one has a crystal ball but, you know, some Democrats had been concerned if you go forward with impeachment, the President gets acquitted in the Senate, that will actually strengthen him in the 2020 election. If impeachment helped President Trump win in 2020 would it be worth it?

PELOSI: Let me just say this, just because the Senate may not have the courage to recognize the president's violation of the Constitution doesn't mean that they're off scot-free. We have to have a very compelling case as we go forward for the American people and for the Senate. So, again, outcomes in election have nothing -- I solemnly swear to uphold the Constitution as long as it doesn't make a difference in the election. That's not the oath we take.

We're there to keep the Republic or we're there to play politics with impeachment and that's not what we're doing. Facts are there. And we are proceeding to get further evidence as we go forward and it doesn't hinge on whether Mitch Mcconnell has the guts to really do what the Constitution requires or what the impact is on the election but I will say this, having said all that, separate from that, the re-election of Donald Trump would do irreparable damage to the United States. We have some serious repair and healing to do in our country for what he's done so far. I'm not sure that two terms--it might be irreparable.

STEPHANOPOULOS: You can see she wants to take it step by step. She is completely committed to this right now. That’s what’s going to lead to a real showdown. Whether it’s weeks or months, it’s coming.

ROBIN ROBERTS: That last statement from her was quite strong!