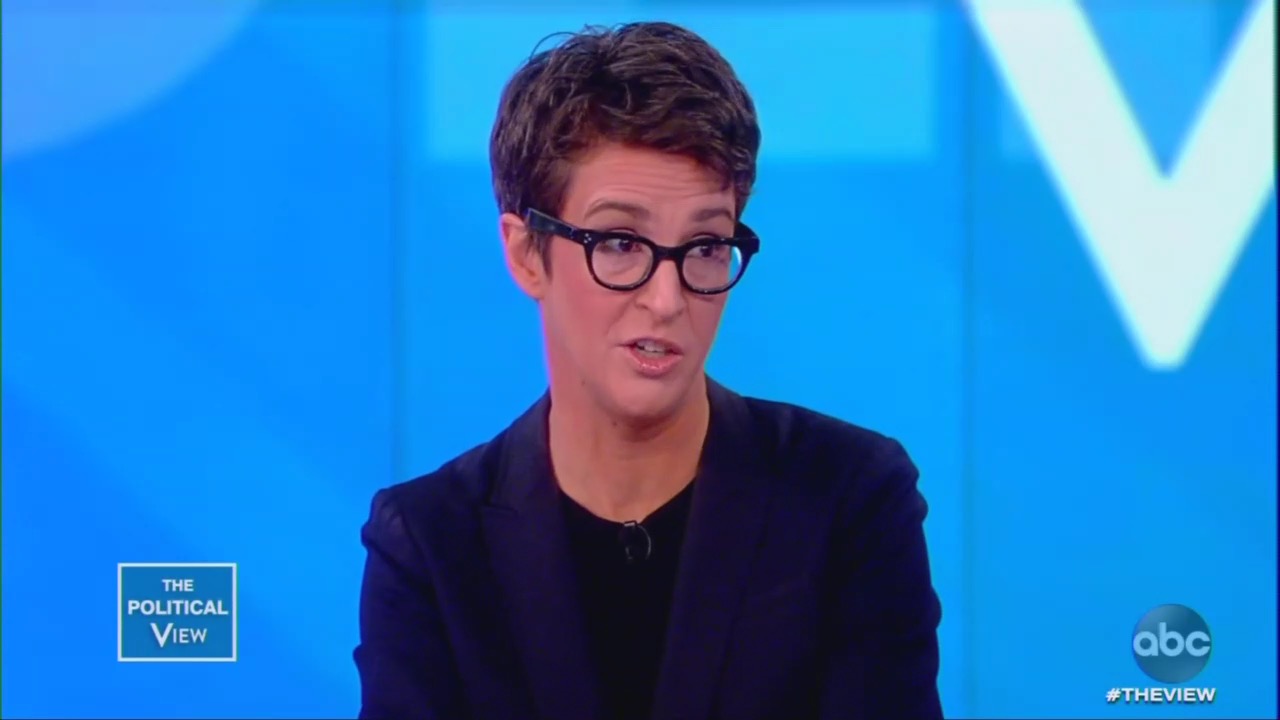 Thursday, MSNBC host Rachel Maddow came to The View to discuss the impeachment inquiry into President Trump, and her new book. During her time there, she defended Rep. Adam Schiff’s lies, suggested Vice President Pence would be impeached too, and defended MSNBC as a nonpartisan news network.

Joy Behar started the interview complained that President Trump had made the country a “complete embarrassment” on the world stage and began to chant, “Put him in a home! Put him in a home!” After that temper tantrum, Meghan McCain asked Maddow’s opinion on Adam Schiff’s “parody.” Of course, Maddow defended it, saying, “It sounds like a mafia shakedown. That's the point.” Maddow also denied Schiff lied about not knowing the whistleblower's complaint ahead of time. Even Abby Huntsman pushed back, calling him a “partisan.”

Maddow pretended to be confused that anyone would think Schiff was biased. She falsely claimed, “He was actually reticent on impeachment!”

Surprisingly Huntsman kept pressing, pointing out that many Americans had lost their trust in the media over their relentless anti-Trump agenda. “Do you think you’re part of that problem?” she asked the MSNBC host, referring to herself and her media colleagues. Maddow seemed taken aback, but claimed it was all Trump’s fault. “That's what happens when you have a scandal-ridden presidency with stuff that happens all the time, that any other presidency, would have already led to impeachment!” she gushed.

Later on, co-host Meghan McCain pressed Maddow to explain why she thinks her conservative rivals at Fox News get much higher ratings and a more loyal audience than she and her MSNBC colleagues do.

Maddow explained that the difference between Fox News and MSNBC is that MSNBC execs weren’t partisan...they’re just running a TV network!

It's more of a political operation. That's what I learned in getting to know Mr. Ailes. We didn't hang out or anything, but I talked to him about the business. He really approached the business as a political operative. He really approached the business as a political operative. He was trying to get Republican candidates elected and trying to move the Republican party to the right, and he was running that as a constant campaign. I'm telling you, the people running MSNBC are not running a constant political campaign, they're just running a TV network, and when you don't have that same ideological drive, I think you end up producing a different product. We're sort of doing two different things. I don't talk to Mr. Hannity and myself, are doing parallel shows, I think we're doing different projects.

Co-host Sunny Hostin and Maddow also brought up a new Washington Post report which alleged that Vice President Pence also played a role in asking the Ukraine to investigate Biden, which they deemed was an impeachable offense. Maddow and Behar couldn’t be more thrilled.

“So if he gets impeached too--” Maddow began as Behar finished her thought.

“It's president Nancy Pelosi!” Behar gushed as the audience cheered.