Giddy Colbert to Clinton: 'Time to Say, 'Lock Him Up, Lock Him Up!' 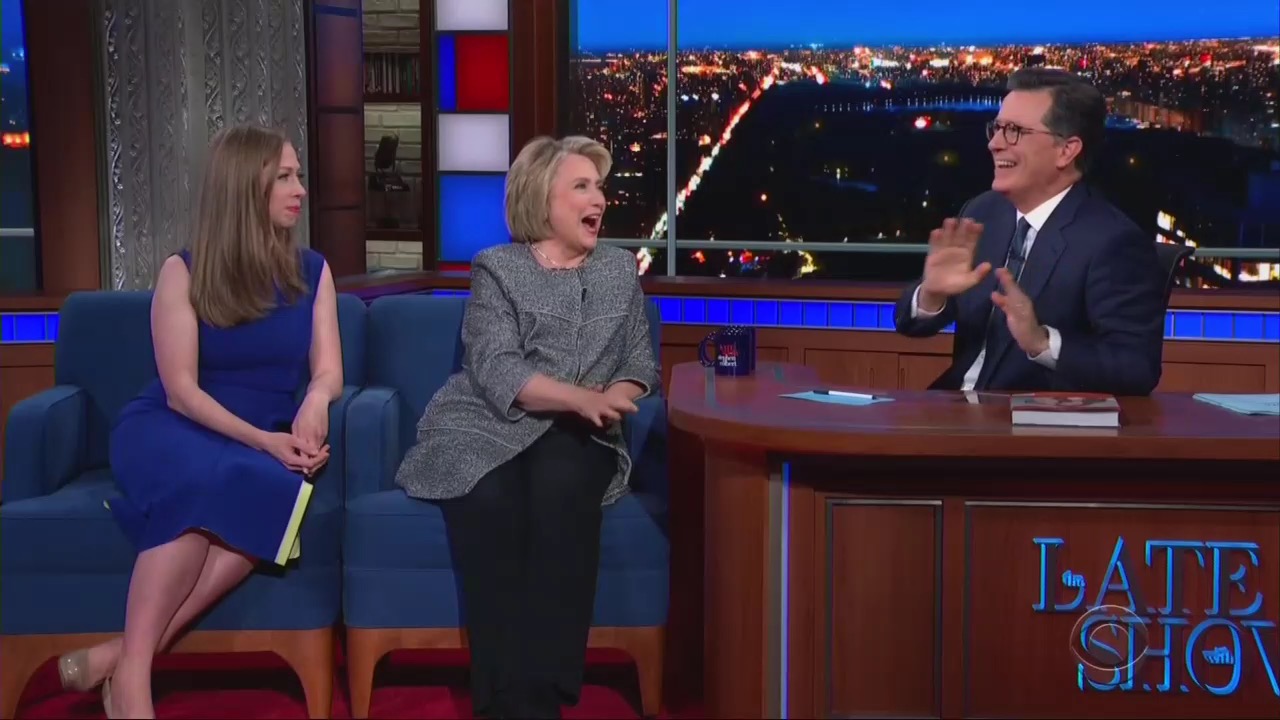 Who better to comment on the Democrats’ desperate attempt to impeach President Trump, than the Democrat who lost to him in the last election? Hillary Clinton was enthusiastically received on Stephen Colbert’s The Late Show Monday night, along with daughter, Chelsea, to discuss their new book, entitled The Book Of Gutsy Women. Of course, the primary reason why Colbert wanted Clinton on his show was to bash President Trump and celebrate the impeachment inquiry.

The interview opened with extended applause and cheering from Colbert’s liberal studio audience, as the Clintons made their way on stage. As Colbert waited for the applause to die down, he cracked,“These are people who are big fans of the alternate timeline we're not living in.” (Yes, the timeline which he himself was so sure was going to happen, he didn’t even prepare a show which had Clinton losing the election, in 2016.)

“We learned about the Trump-Ukraine call, the private server. Is it time to, dare I say, lock him up? Lock him up?” he chanted as Hillary Clinton laughed.

As the audience chanted ‘Lock him up’ back in response, Colbert apologized. “I created a monster,” he joked.

Clinton of course, supported the impeachment inquiry, which earned more enthusiastic applause from the audience.

Colbert again invited Clinton to mock Trump, asking, “How many times when you were Secretary of State did you have to say so Barack Obama, ‘you can't extort foreign countries to get dirt on your political enemies?’ I mean, did you lose count how many times you did that?”

Later in the show, Colbert encouraged Chelsea to dish on how she really feels about President Trump’s “obsession” with her mother. He asked if Clinton “had the urge” to “slap” Trump in the mouth when the “lock her up” chants arose:

Clinton admitted she “worried” about the “rabid” chants at Trump rallies:

Well, some days I think he thinks about her more than I do, which is saying a lot -- ( laughter ) ( Applause ) -- Because I think about her a lot. And, you know, Stephen, I do, um, kind of feel a need to protect her, because I do worry about her, given what we continue to see at his rallies like the rabid "Lock her up" chants.

Colbert has tried this before with Chelsea. Last year, he begged her to curse Trump while she was there plugging her children's book.