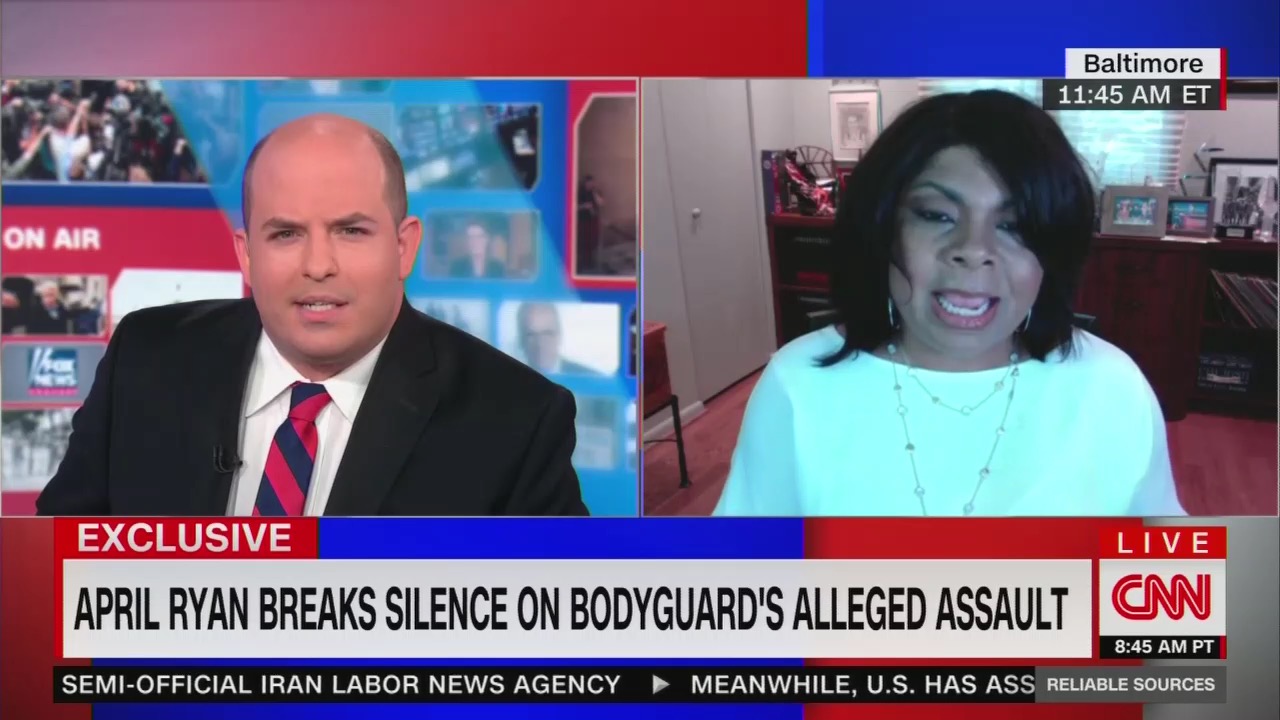 After spending a segment complaining the media wasn’t anti-Trump enough, Reliable Sources host Brian Stelter went on to assist April Ryan in blaming the President for her own controversial behavior. The CNN analyst gave her first interview to Stelter after her bodyguard was charged with assault for violently evicting a journalist who was covering an event Ryan was speaking at, earlier this month. Ryan defended her reputation as a free press advocate, while at the same time excusing the incident as an unfortunate result of fears for her own safety in the “Trump age,” a claim that Stelter eagerly touted.

At the top of the segment, Stelter described the assault, but framed it as a byproduct of Trump stoking anti-media sentiment: “Ryan was there with a bodyguard, you just saw him walk through the frame, an unfortunate reflection of the fact that she’s faced death threats for speaking out in the Trump age...”

Stelter then timidly confronted Ryan about “a lot of people’s concerns” about this being “a First Amendment violation.” The CNN analyst was defensive from the start:

“Anyone who knows me knows that I'm the first person who wants to get a story out, be it on TV or radio, and the only reason why I've been quiet is because of threat of lawsuits,” Ryan claimed, before insisting she did not order him to do anything but her bodyguard was “concerned with [her] safety.”

Stelter did ask Ryan what was wrong with being videotaped at an event. Ryan again downplayed evicting the journalist saying he hadn’t asked her “permission” and she did not want her words “twisted.” Once more, Stelter pathetically tried to assist Ryan in apologizing but she refused:

STELTER: Do you regret that the bodyguard put his hands on this reporter? To me that's completely inappropriate.

RYAN: Well, again, my former contracted security personnel thought I guess I suspect was concerned for my safety.

Not even pretending to be objective, Stelter sympathetically asked Ryan to elaborate to the audience about the “death threats” she’s received, to which she willingly obliged, calling the "atmosphere" around journalists "charged."

However, Stelter did ask her once more at the end of the interivew, why she didn’t just allow the journalist to remain, weirdly comparing the anti-Trump Kratovil to an Infowars reporter, he once ran into.

Ryan again justified her actions as a protective measure against getting her words "twisted" by someone “with an agenda" that would "create hate against me, and death threats."

“As long as this atmosphere continues, Brian, I'm going to have to have a bodyguard,” she stated.